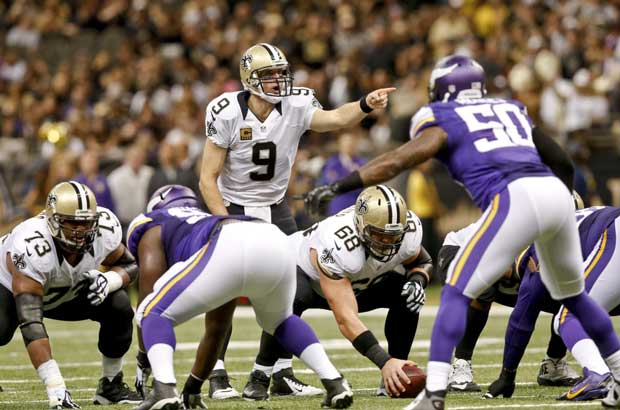 Saints out for Viking revenge

The NFL nears closer to the midpoint of the 2018/19 regular season this week as the Texans host the Dolphins to kick-off match week 8 in Thursday night football.

League standings remain tightly contested, with this season shaping up as one of the most evenly matched contests in the history of the NFL.

After seven weeks, 18 teams possess a record standing .500 or better, with 14 of these teams owning a winning record.

The importance of a good start can't be underestimated.

Match week seven was another gripping round for football fans, with seven games decided by one score and five of these by less than three points.

After assessing the matches for match week 8, there are no signs of things slowing down.

The charging LA Rams host Aaron Rodgers' Green Bay Packers, the 2018 London Series concludes with the Philadelphia Eagles meeting the Jacksonville Jaguars, and the game of the week caps off an action filled Sunday as the Minnesota Vikings square off against the New Orleans Saints.

When assessing the teams at the moneyline, this match seems to be the Rams' to lose.

The Los Angeles side are the only team left with a perfect record, looking for their 8th win on the bounce against the Packers.

The Rams' home form is strong, winning their last 5 from 7. QB Jared Goff is completing 69.7% of passes for 2,130 yards and currently has 14 touchdown passes for the season.

As for the ground game, the Rams are averaging 153.1 yards per match and Todd Gurley is having a MVP calibre season with 686 total yards and 11 touchdowns. Look for him to have another explosive game here.

Green Bay have been hot and cold to start the year, largely due to a shaky Rodgers after his week 1 knee injury scare, as well as inconsistent performances from their defence.

Last week's bye couldn't have come at a better time for the Packers, giving their squad much needed time to recover from bumps and bruises.

One key factor in Green Bay's favour here is undoubtedly their experience in key positions.

Linebacker Clay Matthews has been a long standing linchpin in the Packers' defensive line, and he has built his reputation on standing up when his team needs him the most. His presence will be vital to pressure Goff into potential errors.

Aaron Rodgers has forged his whole career on proving doubters wrong, yet has never faced an underdog line of +9, which has been set by all major bookmakers.

If the line stands, it would represent the largest underdog line which Rodgers has faced in his career and the biggest since the Packers were 8-point underdogs to the Seattle Seahawks in 2014.

Reasoning: The Rams will likely win this match at home with a strong crowd behind them, however to take on Rodgers with a +9 line is asking for a blow up.

Rodgers' tenacity and drive places him amongst the greatest QBs of all time and the bookmakers' odds will only fuel his motivation to silence the doubters. Expect a high scoring shoot-out, with the Packers to score enough points to hold the line.

The 2018 London Series concludes this weekend, when the Eagles take on the Jaguars at Wembley.

The Eagles are making their first appearance in London, while the Jaguars will play in the UK for the sixth consecutive season.

Both teams are vying for a victory to crawl back to the .500 mark.

Whilst being competitive in all matches this season, the Eagles are yet to rediscover the form that took them to the Superbowl last season.

This was highlighted on both lines of scrimmage last week against the Carolina Panthers, when they blew a 17-0 lead in the 4th quarter to cough up three touchdowns.

Philly are desperate for a win after losing three of their last four. In positive news for Eagles fans, QB Carson Wentz looks to have fully recovered from the ACL injury that kept him on the sidelines for all of last season after logging 310 yards and two touchdowns against Carolina.

The Jaguars are in deep trouble. For a team one game away from the Superbowl in 2017, they look like a faded image of that powerhouse defensive outfit.

Since their week two victory over the Patriots they have struggled offensively, scoring 28 points in their last three games and conceding 90.

This led to the benching of QB Blake Bortles for their last match. Bortles has been awful in the Jags’ current skid, and it is unclear who will get the start in this one.

Surprisingly, the Jags are only one game out of first place in the AFC South and a win here could propel them to the top, which would be astonishing considering their performances this season.

Reasoning: The Eagles normally love these gritty defensive contests. The Jaguars offence right now is struggling big time and if Cody Kessler starts as QB, I give them even less of a chance to secure a victory. Furthermore, the Eagles' rush defence isn't going to give the Jags an inch on the ground. This is a must win game for both teams, however expect the Eagles to hold more firepower in attack.

The prime-time match of the round sees Drew Brees' Saints travel to Minnesota to take on a hot Vikings team, who have finally hit their stride.

The Saints are looking to build on their five game win streak to space the competition in the NFC South.

Drew Brees continues to defy his age, completing 77.3% of his passes for 1,870 yards, 13 touchdowns and zero interceptions.

At their best, this Saints' attack could pile the points on any defence. On the ground, they are averaging 108.3 yards per contest and running back Alvin Kamara leads the way with 363 yards and six touchdowns.

The Vikings will be looking to build on their three-game winning streak to keep pace in the NFC North.

The Minnesota side has managed to create a fortress at U.S. Bank Stadium, winning seven of their last eight home games.

QB Kirk Cousins is having a great year since his team swap from the Redskins, completing 70% of his passes for 2,162 yards, 14 touchdowns and three interceptions. Cousins has two or more touchdown passes in 9 of his last 14 games.

Another highlight for the Vikings this year has been WR Adam Thielen. Thielen rewrote the NFL record books midway through the fourth quarter of his team's 37-17 win over the New York Jets, becoming the first player in the Super Bowl era to record 100 yards receiving in each of his team's first seven games.

Reasoning: The smart money here is all pointing to over the 52 total match point line.

Both sides possess blistering attacks and while the Vikings are a strong defensive outfit, especially at home, Drew Brees has enough attacking weapons at his disposal to unlock their line.