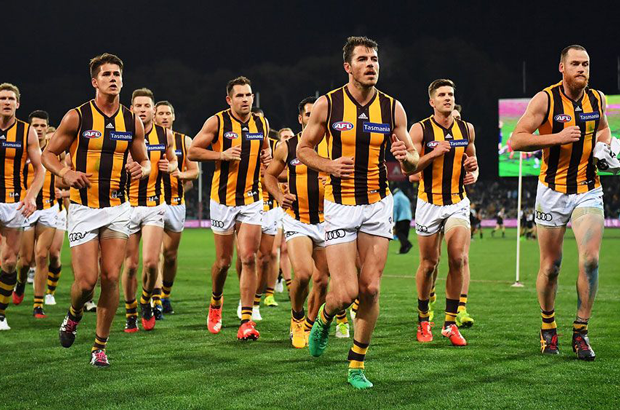 Last year's 12th place finish spelled the end of a Hawthorn dynasty which spanned over ten years and comprised of seven straight finals appearances, five grand finals and three consecutive flags. With Luke Hodge's departure to the Lions and Josh Gibson's retirement, there is a feeling amongst the Hawks faithful that the glory days are well and truly over and dark clouds are starting to form.
Despite their poor showing last season, the Hawks remarkably ranked first in disposal efficiency (76.4%). This statistic, however, misrepresents their ball playing dominance as their 'safe and patient build up' style (frequent chips to unmarked teammates in defence), skews the results in their favour.
This lack of bravery was borne out in the contested ball stats, where Hawthorn ranked 16th, averaging a paltry 134.4 contested possessions per game. A team with excellent kicking and handball skills, Hawthorn simply lacked the grit and grunt that it takes to be successful in the AFL. Having not recruited any hard nuts, the Hawks will be out-muscled against the league's tougher oppositions.
With coach and mastermind of former success, Alastair Clarkson, looking likely to leave the club when his contract expires in 2019, the Hawks will be using this year to lay the platform for another tilt at the finals once Clarkson departs. Expect a youth-focused approach that is less about getting results and more about instilling good habits in the next generation of Hawthorn players.
Player to watch: Young James Sicily dominated the air for the Hawks last season. Ranking first in both marks (6.9) and contested marks (1.7), this skillful defender is quickly becoming one of the competition's best half-backs.
Key player: Tom Mitchell is a ball-magnet. Ranking first league-wide in disposals per game (35.8), the classy midfielder will need to not only get the ball in his hands, but use it for the team's benefit. If he can up his score involvements whilst maintaining his ability to find the ball, the Hawks will be a far better team.

With Hodge and Gibson departing, the Hawks backline is looking very inexperienced. Sicily, as well as Blake Hardwick and Kaiden Brand, will need a few more seasons to reach their peak. With elder statesman Shaun Burgoyne well into the twilight of his wonderful career, the Hawks' defence is looking shaky.

The captain with the great name, Jarryd Roughead, will be looking to rough up opposition defenses once again this year. He lead the goal tally for the Hawks in an excellent comeback from illness, bagging 38. With the potential to improve on that total, and with support from the ever-dangerous Paul Puopolo and young gun Tim O'Brien, the Hawks attack is typically menacing.

Tom Mitchell ran a one man show for the Hawks in the midfield last season. He will need a bigger contribution from the silky Isaac Smith and industrious Liam Shiels, particularly in the contested ball department, if Hawthorn are to return to the finals.