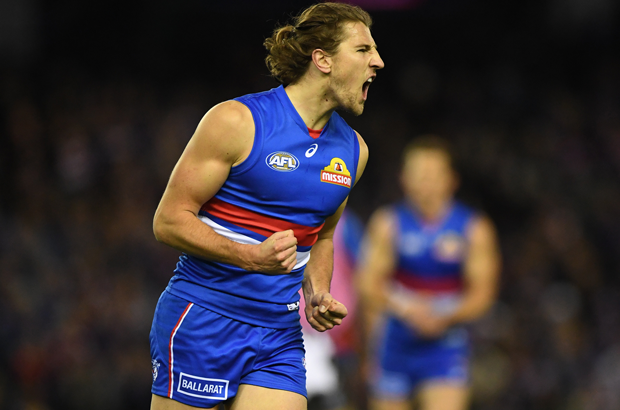 Going into the 2016 finals series having finished 7th, the Bulldogs played four games of such sublime skill, composure and daring which lead them all the way to the flag, breaking a 62-year premiership drought in the process. Last year's underwhelming 10th placed finish however, left many punters thinking that the 2016 premiership was nothing more than a flash in the pan.

Tom Liberatore and Jason Johannisen will be crucial for the Bulldogs if they are to recapture some of their 2016 form. Son of club legend Tony Liberatore, Tom is a tackling machine and piles the pressure on opposing midfielders. Lightning-quick and capable of turning defence to attack in the flick of a switch, Johannisen was the player who embodied the Bulldogs' surge to the flag. However, both players were disappointing in 2017 and the biggest sufferers of the Dogs' premiership hangover.

What was evident from the 2017 season was that the Bulldogs didn't waver from the free-flowing, running-based game that had them standing on the dais on Grand Final day. This was apparent in the stats, as the Dogs ranked 2nd league-wide for handballs per game (188.6) and only came in at 15th for kicks (203.8) and 17th for marks (84) per game. This suggests that the Bulldogs continued their swashbuckling style, running the ball from half-back and the midfield, and linking up with handballs rather than kicking it long.

This method didn't yield the success of the previous season however, due to a combination of poor execution and a lack of intensity that was lulled away by the ease with which the 2016 Premiership was won. Coach Luke Beveridge will need to refocus his players if they want to have another crack at finals footy in 2018.

Player to watch: The shortest player in the league, Caleb Daniel had a solid 2017. Bursting onto the scene in their premiership winning year, Daniel consolidated his game last year, averaging 22 touches per game. A sprightly and tough-to-tackle opponent, he will be looking to take his game to the next level this year.

Key Player: Marcus Bontempelli, otherwise referred to as 'the Bont', put his teammates to shame last season. Ranking first in clearances, tackles, contested marks, contested possessions and goal assists, as well as booting the third most goals for his team, Bontempelli demonstrated why there are big wraps on the 22-year-old . Without him, the Dogs could have ended up with the wooden spoon. If he can develop his game even further this year, he could single-handedly pull his team into the eight. A special to claim the Brownlow medal at $12 and a must for all fantasy footy teams

The Dogs' half-back line is one of the best in the league. Alongside Johannisen is ever-reliable captain Easton Wood and the laser-like kicking precision of Matt Suckling. Their younger full-backs will be looking to improve to produce a more complete defensive force.

Full-forward Jack Redpath will be hoping to improve on last season's tally of 15 (admittedly from limited games). With Jake Stringer's departure, new recruit Jackson Trengove has a fantastic opportunity to endear himself with Bulldogs' fans.

After the Bont, it's pretty slim pickings for the Dogs in midfield. Liberatore needs to recapture the tackling pressure he made his own in 2016, while Beveridge will be looking at the no longer inexperienced trio of Jack McCrae, Luke Dahlhaus and Lachie Hunter to contribute more to the team.