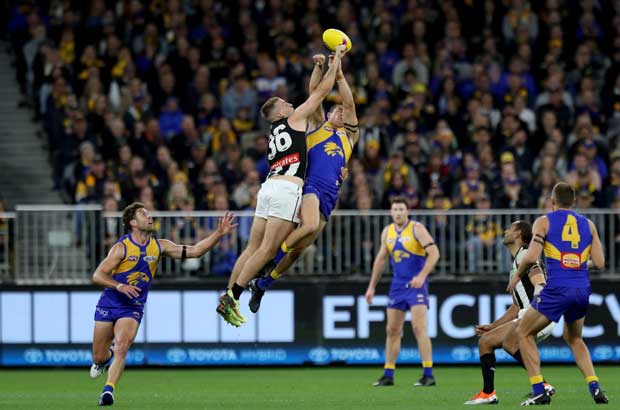 Eagles to soar or Magpies to swoop?

The 2018 AFL season boils down to this. Two clubs, one game, one winner and one loser.

Neither of these teams were expected to be running out on the hallowed turf of the MCG on grand final day, reflecting just how unpredictable season 2018 was.

With so many storylines heading into the big dance, it's hard to know where to look.

But no story is bigger than the resurrection of the Collingwood Football Club under Nathan Buckley.

A former Magpies legend in his playing days, Bucks' transition into coaching was far from smooth, with even the most loyal of Pies' fans calling for his head after last year's 13th-placed finish.

Just keeping his job by the skin of his teeth, Buckley is now fresh off winning the coach of the year award, and on the brink of basking himself in glory with a grand final win.

And after demolishing the Tigers at the 'G last week- a task that seemed impossible- the Pies are deserved favourites.

Standing in their way is Adam Simpson's Eagles, who also played their best game of the year in their preliminary final.

They made the Dees look like a VFL team, as they completely dismantled them in front of an ecstatic home crowd.

With both Josh Kennedy and Jack Darling in their side, West Coast look like a completely different team.

In fact, when these two have both played in 2018, the Eagles are undefeated.

This is a stat that Collingwood will need to overcome if they want to be crowned the champions on Saturday afternoon.

A little bit of rain around for the big dance, which would place a greater emphasis on contested possessions.

Other than the obvious statistic of goals scored, contested possessions have long been regarded as the most important area in the game.

With the ball continually being fought over, the side that can win the pill in the contests always has a better than fair chance of getting the W.

In the eight finals games played in the last three weeks, seven of the winners also won the contested ball battle.

Furthermore, the last five grand finals have all been won by the team who racked up more contested possessions than their opponent.

This swings the advantage massively in Collingwood's favour.

As this table demonstrates, Collingwood have averaged considerably more contested possessions than their West Coast counterparts in 2018.

They are a side with an awesome midfield that base their game on winning the ball in the scrap.

However, the Eagles demonstrated a massive improvement in their contested ball numbers last week, indicating that they are more than capable in the contests.

But, after such a significant improvement last week, it will be a challenge for West Coast to maintain their tenacity in an area where they typically don't dominate.

Both prelims reinstated the value of having tall players who can mark the ball in your side.

American beanpole Mason Cox played his best ever game of Aussie Rules, marking everything that came his way.

With others like Jordan De Goey and Jeremy Howe who make marking the ball look far easier than it is, the Pies have all the players to win the aerial battle.

However, marking the ball is the undoubted strength of the Eagles, as this table indicates. 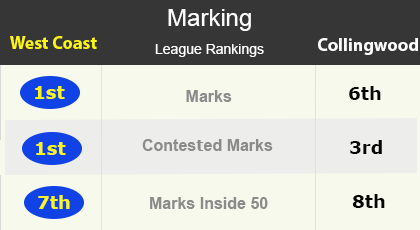 West Coast are a team full of tall timbre, who have an advantage over the Magpies in all three marking statistics.

With players like Jeremy McGovern and Shannon Hurn in the back line, and Josh Kennedy and Jack Darling up front, the team from the West have all the capability to control the game from the air.

Limiting their losses or better yet breaking even in the marking stats will set Collingwood up to succeed.

The disposal stats and in particular, the type of disposals each team favours provides a crystal clear indication of how both teams like to play.

West Coast don't muck around with handballs, they just get the ball on the boot and send it forward, looking to keep the ball in the air where they can demonstrate their proficiency at marking the ball.

The benefit of this style of play is that it also keeps the ball out of midfield contests, an area where Collingwood are strong.

The Pies meanwhile like to keep it locked in where their superior midfielders win the ball and then handball to each other, looking for players in space.

The advantage of playing like this is that precision handballs to teammates on the run and in space opens up the game.

Players with room around them have more time to make the right decision with the ball, creating better goal-scoring chances.

While both styles can be effective, it all comes down to who gets first use of the ball to implement their game plan.

In other words, it comes back to contested possessions, an area where the Magpies have been better all year.

West Coast have won both games against Collingwood this year: a 35-point win at the MCG in Round 17, and a 16-point victory at Optus Stadium in the first week of finals.

While the Eagles have had the wood over Collingwood of late, the preliminary finals suggest that this counts for nothing.

The Pies had lost both games to the Tigers in 2018, before coming out and putting them to the sword last week.

Also, the Demons and Eagles met in Round 22, where the Melbournians had a 17-point win over in the west.

The same fixture last week saw the Eagles romp away for a 66-point victory.

Therefore, don't pay too much attention to the fact that West Coast have won their two games against the Pies this year. It comes down to who turns up on the day.

While both players will line up for the grand final, it would likely be a different story if it was just a regular home-and-away game.

In a grand final where the intensity level goes up once again, don't expect Shuey and McGovern to have their usual impact.

The Magpies midfielder is fresh off a 2nd-placed finish in the Brownlow and in career-best form.

Equally skilled off both right and left boot, it is Sidebottom's fitness that allows him to run for days and continually find space on the field.

While his ability to rack up the touches is unparalleled for the Pies, he is expected to get a hard tag from the Eagles' Mark Hutchings.

By starving him of the freedom to run where he pleases, this tag will surely limit Sidebottom's impact on the game.

Not only does he dominate in the hit-outs, but when the ball hits the ground, Grundy has all the agility and skill to become another midfielder.

The Eagles however have a pair of accomplished ruckmen of their own, who will endeavour to curb Grundy's ruck dominance.

Since making the transition from a half-backer to a midfielder, Yeo has only improved as a player.

At 190cm, Yeo is unusually tall for a player who hangs around the stoppages.

This gives him an advantage both on the ground and in the air.

If the Eagles win, Yeo will be at the heart of it.

The Magpies captain will be looking to join an elite group of players who have won two Norm Smith medals.

He is a big-game player so you can't discount him.

But with so much talent and class in Collingwood's midfield, you feel that they will take votes off each other.

The Eagles' spearhead in attack is coming off a dominant prelim where he notched up four goals and seven marks.

While it would be disrespectful to Kennedy to say that he is the Buddy of West Coast, his importance to the side can't be understated.

The best lead-up forward in the game, Kennedy is capable of having a cracking game.

Bear in mind that only two forwards have won the Norm Smith in the last decade.

The league-leader for intercept marks two seasons in a row, McGovern's ability to judge the flight of the ball is unparalleled.

He will be key to West Coast's chances of winning.

But after picking up a knock to the ribs last week, McGovern may struggle to perform at his high-flying best.

Arguably the best player of the finals series so far, De Goey is the spark in Collingwood's team.

He spends more of his time in the forward line than Dusty, and consequently has a more direct impact on the scoreboard.

Look for a huge game from De Goey.

Reasoning: While West Coast will put up a good fight, recent years have shown that it's incredibly difficult for interstate teams to prevail at the 'G on grand final day.

De Goey is great value for a player that has all the weapons to decide the outcome on his own.