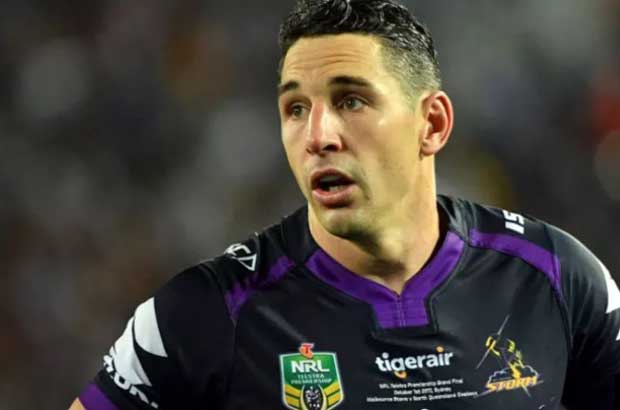 The Storm and Roosters have featured in 16 of the past 21 Grand Finals, however this Sunday will see them face off against each other in the showcase event for the first time.

They will meet in unlikely circumstances as both teams face a realistic chance of running out on Sunday night without one of their superstars.

Billy Slater will have to plead his case to the judiciary after being charged with a shoulder charge on Sharks winger Sosaia Feki in the Storm's win in the preliminary final.

Meanwhile, the Bondi boys will be sweating on the health of Cooper Cronk after the star halfback suffered rotator cuff damage in their win over the Rabbitohs at Allianz Stadium.

Both clubs received better news on Sunday morning as two other key players were given the green light to take part in the Final.

Jake Friend will be available after being hit with a grade one dangerous throw charge, meaning a guilty plea will see him take the field. Whilst Storm prop Tim Glasby has been cleared of a rib injury.

The Roosters' defence was outstanding in the preliminary final.

With the injured Cooper Cronk a passenger in the line, the Chooks managed to hold the Bunnies try-less for the entire game.

Trent Robinson has built his season on defence. This foundation will take them a long way to premiership glory come Sunday, with or without Cooper Cronk.

The eastern Sydney side's defence has been impressive over the past four weeks, conceding an average of only 8.5 points-per-game.

The Roosters Defence over the past 4 weeks

The Storm was on-song against the injury-ravaged Sharks on Friday night, with Billy Slater crossing for a try-scoring double in his last appearance at AAMI Park.

Melbourne is looking to become the first team to win back-to-back premierships since the great Brisbane Broncos team of '92/'93 and are likely to do so without their superstar fullback Slater.

Slater has had an injury-plagued end to his career, missing 39 games in the past three seasons.

The Storm has still managed to make the Grand Final in each of these three seasons and has proven a class above the league, even without the great fullback.

Melbourne Storm with and without Billy Slater

The Storm struggled without Slater in the early stages of his career, wining at only 26.7% when he was on the side-lines.

Craig Bellamy has since implemented a back-up plan at the tail end of Slater's career, with more than able replacements in Cameron Munster, Jahrome Hughes, Young Tonumaipea and Ben Hampton filling the void since 2013.

There is no doubt the Storm are a better side with Slater in the starting side, however, the stats suggest they can still win without him.

The last time the two sides clashed was in Round 16 when the Storm prevailed in a nail biter, as Cameron Smith slotted a field goal in the 79th minute to get his side home 9-8.