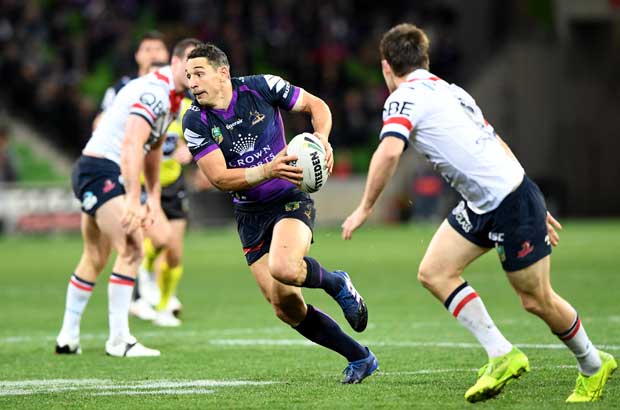 Two of the most dominant teams of the modern era will clash this Sunday night at ANZ Stadium, in one of the most anticipated Grand-finals of recent times.

Despite the fact Cronk’s move to Sydney was imminent, there was no love lost between Storm captain Cameron Smith and Cronk, with the bad blood evident to all.

Cronk's first meeting with his old club came at Adelaide Oval back in round 16 where Smith had the last laugh, kicking a field goal to secure a 9-8 victory on a cold, wet Adelaide night.

Highlights of the Round 16 Roosters vs Storm clash

The severity of Cooper Cronk's shoulder injury has been the talk of the town this week, with every pundit having their opinion on whether he’ll line-up for the big dance or not.

One thing is for certain though. Cronk will move heaven and earth to be there. And if he’s not, his presence and the lessons he’s taught in 2018, may well be enough to get the tri-colours over the line.

Such is the value of Cronk's influence that many of the Roosters’ key players have seen a vast improvement in their game this season.

The likes of James Tedesco, Blake Ferguson, Daniel Tupou and Latrell Mitchell have all come of age this season, playing with more patience and producing more consistent performances off the back of it.

The Roosters welcome back two State of Origin representatives this week in Latrell Mitchell and Dylan Napa, who both look primed to produce a season-best performance.

Coach Trent Robinson, in an interview after last week’s Rabbitohs clash, noted there was still plenty of improvement in his men and said they were well and truly ready to take the next step up into the Grand Final.

But the question remains, how effective can the Roosters be without Cronk? Let's just hope for Roosters and Rugby League fans that come Sunday night, they won't have to ponder this question.

The boot is on the other foot for Melbourne fans, who already know their fate.

As the entire country argued the ruling of Billy Slater's judiciary hearing, Storm fans would have no doubt been relieved as news filtered through that their star fullback will take to the field this Sunday.

While the Storm has shown in recent years they can win without Slater, there is no doubt of the value he adds, and without him, Melbourne would struggle to break the Chooks’ strong defensive line.

Melbourne haven't been without their own injury concerns of late, with prop Tim Glasby now cleared to play after suffering a rib injury in last week’s clash with the Sharks.

The Storm into this game as deserved favourites and will be looking to give Billy Slater the fairytale send off. Slater has proved himself as arguably the best fullback in Rugby League history and will provide the inspiration for his teams mates to leave nothing on the field.

Melbourne have had little success in their milestone games this season, failing to celebrate a win on two significant occasions this year

For the Roosters to

The catalyst for the Roosters win last week was their extraordinary defensive effort with James Tedesco proving himself as the best defensive fullback in the game.

Tedesco's influence has taken effect off the back of a strong Origin campaign which propelled him into career-best form, in both attack and defence.

The Roosters have conceded a mere 8.5 points per game in their last four outings and will look to their defence to get them home in this one.

For the Storm to

The Storm produced another workmanlike performance against the Sharks in their Grand Final qualifier last week, with retiring fullback Billy Slater stealing the limelight with a try-scoring double in his final ever home game.

Coming up against the defensive force of the Roosters, Melbourne will need to be patient this week for the full 80-minutes. They will have plenty of opportunities - as did the Bunnies - however, don't be surprised to see their points earned in twos until they get into a groove.

Craig Bellamy will look to his most experienced players in Cameron Smith and Billy Slater to lead from the front.

The Storm has 37 Grand Final caps between them, compared to the Roosters who without Cooper Cronk have only 9.

Where the game will be

The yardage game. The battle of the middle will determine the winner of this one.

There are two key components to winning the yardage battle. The first is the effectiveness of the back three and how many metres they can make running out of their end on kick-return. The second is the devastating ball running of the forwards.

Both of these factors lead to quick play the balls, which is key to controlling ruck speed and exposing defensive lines.

This leads to fatigue and missed tackles which then opens up holes in the defensive line, and in turn, lessens the ability of teams to implement their wrestling techniques that are so heavily relied on by both clubs.

Check out the tables below to see who holds the edge in the yardage game between the back three and both forward packs heading into the Grand Final. 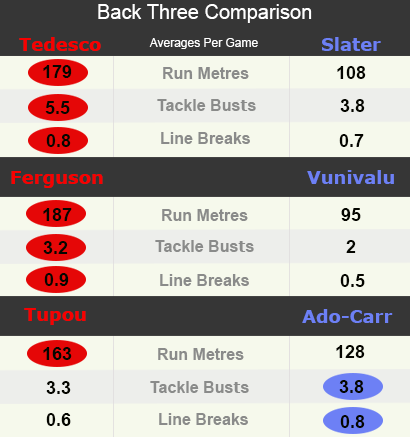 The Roosters back three hold a clear edge over their rivals and have proven themselves as the premier back three in the competition.

Look for Cameron Smith and the Storm halves to kick to Daniel Tupou as often as they can, keeping the ball away from James Tedesco and Blake Ferguson who have proven to be the strongest kick-return runners in the league. 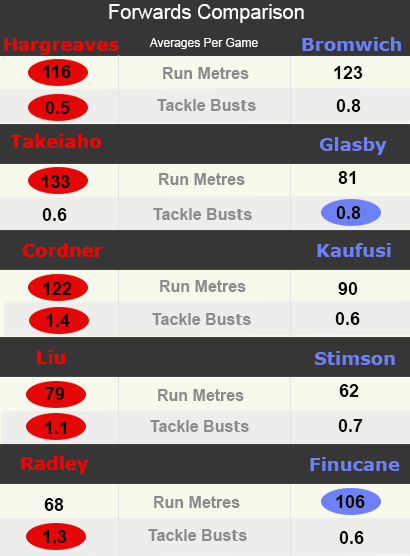 The forward packs are more evenly matched. Both teams will look to their bench for impact and break the game open, the Roosters will be hoping for a huge performance from Origin representative Dylan Napa, while the Storm will have a big expectation of big ,  Nelson Asofa-Solomona.

Reasoning: The Roosters defence has been out of this world in recent weeks, and this should continue on Sunday.

With or without Cooper Cronk, the Roosters back three can still dominate the metres game, which will lay a solid platform for their forwards to roll through the centre of the park.

If Cronk manages to play the full 80-minutes, it will be a huge bonus and will go a long way to securing the Roosters a Premiership.