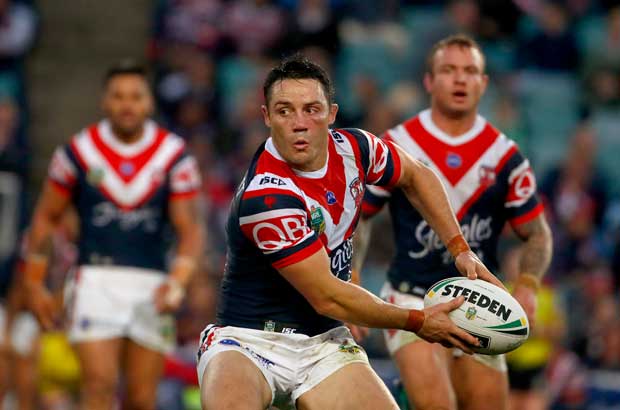 Jump To: Storm vs Sharks Roosters vs Rabbitohs

The oldest rivalry in Rugby League history is set to explode this Saturday night when the Chooks take on the Bunnies at Allianz Stadium in the Grand Final Qualifier.

With everything on the line and no second chances here, a win would mean so much to both.

The Roosters, with their star-studded line-up, started this year as short-priced premiership favourites. And while they have secured the minor premiership, coach Trent Robinson would see a grand final victory as a defining moment in his short coaching career.

Meanwhile across the road at Redfern, Souths coach Anthony Seibold, who has done a remarkable job with his team this season, is looking for premiership glory in his first year as head coach.

After a disappointing 2017, the Bunnies were considered premiership outsiders at the beginning of this year. However, the emergence of Damien Cook has proven to be the spark they needed.

South's style of play has allowed the NSW hooker's game to elevate to a new level, largely due to the support of the Burgess brothers who have provided consistant 'go-forward' all season.

South Sydney's path to the finals hasn't been all smooth sailing. Going down to the Storm in a one-point thriller in week-one, they managed to fall over the line in week two in an equally thrilling one-point win against the unfavoured Dragons.

With a dominant win over the Sharks in the first week of their finals campaign, the Roosters secured themselves a much coveted week off. The win came at a cost though, with NSW Blues star Latrell Mitchell suspended for this week’s clash.

The Roosters have found form in the back end of the season, winning 11 of their last 14 games.

Their halves combination of Cooper Cronk and Luke Keary has finally clicked, and the partnership is now flourishing after a slow start to the season.

On the other hand, Souths have won only four of their past nine games with only two of those wins coming against top-eight sides.

After a fantastic start to the season, the Bunnies attacking formation was exposed towards the back-end, with a question mark lingering over their ability to score points.

The Roosters will start deserved favourites for this clash given their recent record against the Bunnies.

Winning four of their last five encounters, the Chooks have shown their cross-town rivals a clean pair of heels, and with Cronk steering the ship, they go into this match as deserved favourites.

For the Roosters to win..

The Roosters' forwards will need to rise to the occasion and muscle up against the bigger Rabbitohs pack.

The Chooks matched it with the larger Sharks’ pack, dominating the ruck back in week-one of the finals. They will need to do the same again this week if they are to win the arm wrestle up front.

For the Rabbitohs to win...

Damien Cook will need to take advantage of any quick play-the-balls offered by his huge forward pack.

The Roosters are renowned for controlling the ruck, so these opportunities will be few and far between, but when they do arise, they will provide Souths with their best opportunity to break the Chooks defensive line. 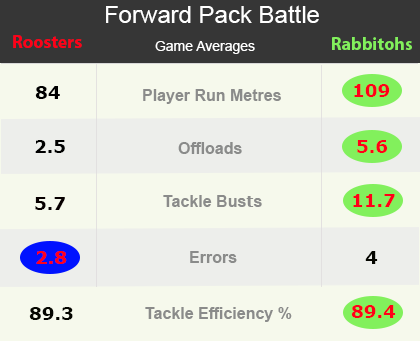 Souths have a powerful forward pack who dominates their opposition more often than not.

They have a clear edge on the Roosters pack in all key facets of the game, except handling errors.

The key for the Bunnies' forwards will be to keep their errors down. Doing so will ensure they can leverage their forwards' dominance and win the battle up front.

Nevertheless, the Roosters pack offer plenty in defence, playing a more workman-like style of smart conservative footy which is reflected in their low error rate. If they can match it with the Bunnies' forwards, they'll go a long way to winning this match.

Reasoning: The loss of Latrell Mitchell is a significant blow, not only do the Roosters lose their key attacking weapon, but their goal kicker as well.

Expect this to be a fiery battle, with each side trading blows in a low-scoring affair.