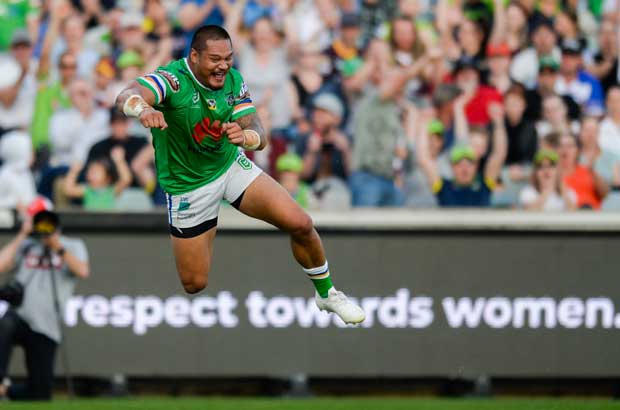 Sunday arvo footy kicks-off out at Brookvale, where the visiting Raiders will be playing for top spot on the ladder.

The other game sees an under-pressure Nathan Brown and Newcastle look to turn things around when the Eels come to town.

Before placing your NRL bets for these games, have a squiz at our NRL betting tips below.

The Sea Eagles would be burning with injustice, after they weren't awarded what was a blatant penalty in the dying stages of last week's 2-point loss to St George.

They'll hope to use that sense of injustice as motivation to get the better of Canberra here.

While the Raiders have got their work cut out for them, they'll going for the jugular, knowing that a strong win will take them to the top of the table.

Why Sea Eagles can win

Based on what we've seen in the past month, Des Hasler has worked wonders with Manly.

He's got the Sea Eagles defending well, and in this period, they're leaking just over two tries per game.

They're also doing all the basics right, and have made the second fewest handling errors in the competition, with just 32.

With DCE in great form, you'd have to think that keeping the Raiders to just two tries here will go a long way to securing the two competition points.

Especially with a vocal Brookie crowd behind them.

Speaking of defending well and doing the basics right, Ricky Stuart's Raiders have been superb.

They've already secured two shut-outs in 2019, keeping both the Titans and Eels scoreless.

But where the Raiders have a key advantage is in their ability to cart the ball upfield.

They're ranked second in the comp for post-contact metres, and with powerful outside backs like Joseph Leilua in their side, it's not hard to see why.

Leilua scored two tries in Canberra's win over Brisbane last week, and will be looking to cause more damage here.

Reasoning: Only the Storm have had any answers for Canberra in 2019. They look the real deal.

The Eels were electric in their opening game at Bankwest Stadium in Round 6, routing the Tigers by 51 points to 6.

The big question will be whether they can sustain that kind of performance playing away from home, especially considering that they didn't score a single point in their previous away match.

The Knights meanwhile look to be in trouble.

After a solid start to the season, it has only got worse, and they'll be desperate to turn things around here.

Newcastle have now lost 5 straight games after their opening round victory.

Last week's 24-point defeat to Gold Coast was easily their worst game yet, with little to suggest they are about to turn things around.

However, with a player of Kalyn Ponga's quality in their side, you can never discount the Knights.

Ponga, as well as new forward recruit David Klemmer continue to be the bright lights in an otherwise underperforming side.

If some of Newcastle's other players can put in a shift, then they'll give Parra a scare.

Coming off a 45-point win, and with their new star player Blake Ferguson named to make a return to the side, the signs are looking good for the Eels.

They'd have to drop their level by a large margin to get done here.

Without a raucous crowd behind them, and with the possibility that they might become complacent and think that this rugby league game is a walk in the park, the Eels' players will need to be careful.

Brad Arthur is sure to be on their case, and ensure that they don't become slack away from home.

Reasoning: Based on how both teams are going, it's hard to back either side with confidence.

2018 media tipster champ: Knights
Check out all the best betting promotions on offer for this weekend's games.