Formed in 1946, the National Basketball Association (NBA) is the top basketball league in not only America but the world. Featuring twenty-nine American clubs as well as the Toronto Raptors from Canada, the NBA is home to the world's best basketball players including LeBron James, Anthony Davis and James Harden. Despite being dominated by American players, there is also a strong international presence in the NBA, with players like Kristaps Porzingis from Latvia, Giannis Antetokounmpo from Greece and Ben Simmons from Australia all playing starring roles for their respective clubs.

The NBA was created when owners of major ice hockey arenas came together to form the Basketball Association of America (BAA). The first game took place in November of 1946 in Toronto, when the Toronto Huskies played host to the New York Knicks. In 1949, the league would expand and change its name to the NBA. The 50s and 60s were dominated by the Boston Celtics, who, along with the New York Knicks, are the only clubs that were one of the inaugurating teams of the BAA, and still exist in the NBA today under their original name. Players like Magic Johnson and Michael Jordan caused a massive increase in popularity during the 80s and 90s, with audience numbers continuing to grow to this day.

The 30 teams are split into two conferences: east and west- which are in turn divided into three divisions each containing five teams. In the East there are the Atlantic, Central and Southeast divisions, while the West contains the Northwest, Pacific and Southwest divisions. With each team playing 82 games per season (four times against division rivals, three to four times against conference opponents, and twice against teams from the other conference), NBA betting is popular amongst punters however it can be fatiguing given the longevity of the season. Like most sport leagues in the world, home advantage is massive, and it's good to look out for teams like the Golden State Warriors and Houston Rockets who have had excellent home records in past seasons.

Once all teams have played 82 games, the playoffs begin, in which the top eight teams from each conference battle it out in an elimination-style series before one team is crowned NBA champion. Each NBA final must contain one team from each conference, and in recent years, it has been the West that has been the dominant force. For sport fans and punters who like a fast-paced and action-packed viewing experience, the NBA is the league to follow.

It’s the business end of the season, with only four teams left to battle it out for the title of NBA Champions. On the West, favourite GSW look destined to be the first team since the Lakers in the early 2000's to three-peat, however a Kevin Duran.....

The NBA playoffs are really heating up now, with three of the four series poised at 1-1 heading into game three. We've provided a match preview and a free NBA pick for those games below, so you can kick back and enjoy the action over the weeke..... 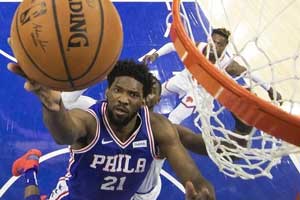 With the NBA regular season almost done and dusted, Friday's fixtures present a mix of games where teams have either plenty or nothing to play for. The undoubted highlight comes first up, when Ben Simmons' Sixers host the ladder-leading Bucks. ..... 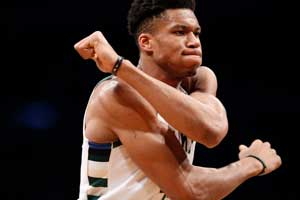 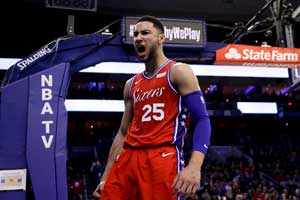 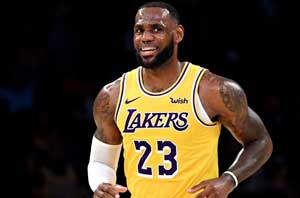