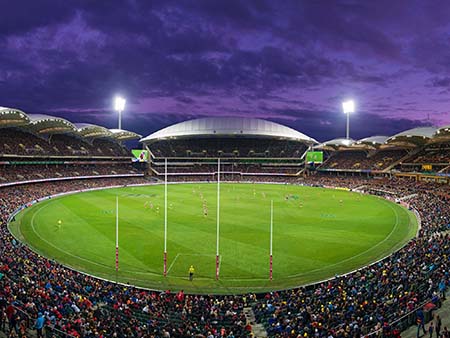 Often regarded as one of the most beautiful grounds in world sport, the Adelaide Oval is home to the not-so-beautiful visceral passion of Crows and Power fans, who hurl vitriol at opposing teams while baying their team on for success, creating perhaps the most feared road trip in the AFL. But when the frenzy of game day passes, the historical Adelaide Oval transforms again into a place of tranquility, home to the Bradman Collection and general place of joy for the sporting enthusiast.

Measuring at approximately 167 metres long and 124 metres wide on game day, the Adelaide Oval is a very narrow ground, with only Kardinia park slimmer in the AFL. In the past two seasons, the Adelaide Crows have perfected a style of play that draws on the ground’s proportions, and hence have racked up a number impressive victories at home. The key to this strategy is constricting opposing teams by flooding their own defensive 50, absorbing pressure, before counterattacking with supreme skill and pace, often getting the ball over the back and running into the open goal. With a narrow midfield, the ball doesn’t get bogged down, but pings from one end of the field to the other, resulting in several high scoring games.

The two highest margins of victory at the Adelaide Oval have come in the past two seasons. In 2016, the Crows thrashed the Lions by a ground record 138 points, while in late 2017 the Power beat the Suns by 115 points. This suggests that at home, both Adelaide clubs are a fearsome prospect. With a capacity crowd of 53,583 right behind them, the Crows and Power will be hoping to use their home advantage as a springboard to make the finals this year, and for years to come.