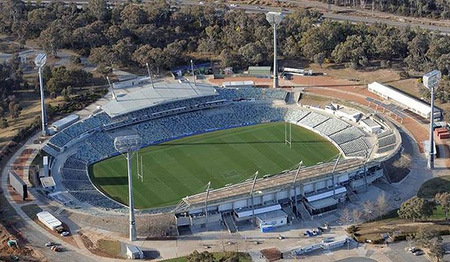 With a capacity of 25,011, GIO Stadium is the largest sports stadium in Canberra. Known also as Canberra Stadium and formerly Bruce Stadium, is the home of the Canberra Raiders in the NRL and the ACT Brumbies in the Super 15.

Built in 1977, it was originally used as an Athletic track given the proximity from the ground to the Australian Institute of Sport. With the removal of the running track in the late 1980s, it would allow the Raiders to make it their new home ground from 1990 onwards, moving from Queanbeyan’s Seiffert Oval.

Due to its inland location, Canberra is considered one of the coldest places to play in the NRL, particularly for teams who encounter the misfortune of having to play at 7:30 on a Saturday night in midwinter. Never was this chilliness so apparent than in 2000, when snow would fall during a match between the Raiders and Wests Tigers, a meteorological occurrence that has never happened since in an NRL game. The Raiders will be looking to capitalize on this cold weather, knowing how hard it is for opposing teams to turn up when the mercury goes down.

While the stadium would host its first ever test match between Australia and New Zealand in 2013, and then its second ANZAC test in 2017, there are calls for the stadium to be upgraded, with the hope of attracting more fans and bigger games to the ground. In particular, there is a push for there to be covered seating. But with passionate Raider fans still turning up in all weather, they would hope to be rewarded by their beloved Green Machine.