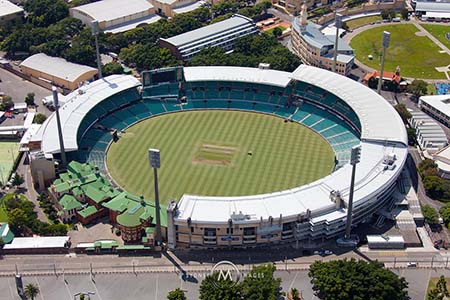 Since their relocation to Sydney in 1982, the SCG has been the home ground of the Swans. In recent times, the ground has become something of a fortress for the Bloods, who will be hoping to make the ground a difficult and imposing road trip for the AFL’s other 17 clubs for years to come.

The pitch invasion of 1999, when Tony ‘Plugger’ Lockett booted his 1300th goal to become the all-time leading goal kicker in VFL/AFL history, will go down as not only one of the SCG’s fondest days, but one of the most memorable moments in the AFL. With Lance Franklin well on his way to eventually catching Plugger, the hallowed turf of the SCG may again receive the boot prints of enraptured spectators in the next decade.

With a playing field length of just over 150 metres, the SCG is one of the shortest grounds in the AFL. This favours the Swans, as well as teams with big, strong midfields who can win the contested ball in the middle of the park and quickly ping it into the forward 50. However, the ground is also one of the widest in the competition, meaning that majority of the play is often in the large wings of the ground. With a defence-orientated approach, the Swans look to block up the middle of the ground and force teams wide into these large wings, often resulting in low-scoring games at the SCG.

Capable of housing a crowd of 48,000 the SCG is also one of Australia’s most picturesque grounds, largely thanks to the heritage-listed Members and Ladies stands. Despite lacking an overly-partisan fierceness in the atmosphere that would be found in Melbourne, Adelaide and Perth, the Sydney Cricket Ground is a pleasant place to watch a game of footy.