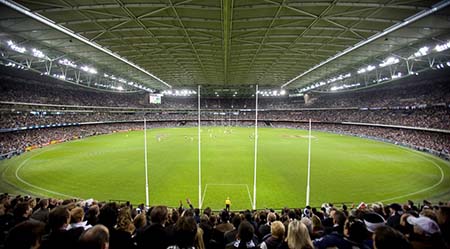 Located in the rapidly developing Melbourne suburb of Docklands, Etihad Stadium hosted its first game of AFL footy in 2000 and has since then gone on to become one of Australia’s premier Australian Football stadiums. It is the home ground of North Melbourne, St Kilda and the Western Bulldogs, as well as the joint home ground of both Essendon and Carlton (along with the MCG). Behind the MCG, there are more games at Etihad Stadium than any other location each year.

The only AFL ground with a retractable roof, Etihad Stadium is the home of the oddity of indoor Aussie Rules footy. This roof not only blocks out rain, but also wind, creating a perfect environment in which there is often several high-scoring games a season. This roof also seals in the crowd, creating a vibrant atmosphere that the players feed off, and are spurned on by. With dimensions measuring approximately 159 metres long and 128 metres wide, the ground is not overly big, and further contributes to the tendency of high-scoring games played here.

In a stadium that is shared by five clubs, not one has managed to make it a feared fortress that opposition teams are reluctant to journey to. Despite the vocal atmosphere, Etihad Stadium is almost seen as a neutral ground, particularly when Melbourne teams come up against one another.

With a capacity of 56,347 Etihad Stadium is the third largest in the AFL. However, an argument can be made for the benefit of traditional, smaller grounds, which despite their money-making deficiencies, create a more authentic home-ground feeling, contributing to both club identity and success. Regardless of these shortcomings, Etihad Stadium is nevertheless a good place to watch a game of AFL footy, in an easily accessible location. The ground is also home to the Melbourne Victory in the A-League.