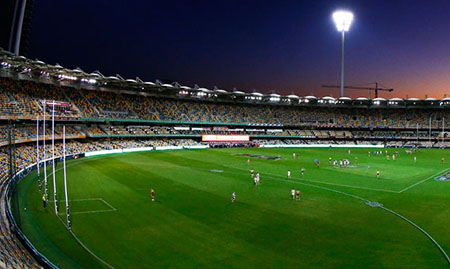 With an Australian Football game played at the Gabba as early as 1905, there has been a long history of Aussie Rules at the ground. However, it hasn’t been a cheery place to be of late for Brisbane Lions fans, who will be hoping that they can turn the Gabba into a fortress and replicate the home success that the Australian test cricket team enjoys at the ground.

The Gabba is the shortest ground in the AFL but also one of the widest, commonly considered to be more circular than oval in its shape. With two evenly matched teams, the Gabba would be a relatively low-scoring ground, due to the massive amount of space on offer in the wings, which would feel like an eternity from goal for some players. However, due to both the shortness of the ground, and often fielding a significantly inferior team to their visiting opposition, the Lions have often found themselves on the end of high-scoring thumpings in the last five seasons. Teams with superior midfields can quickly win the ball from the centre bounce and get it into the forward 50 in a flash. And before long, the ball is back in the middle for a centre bounce, ready for the process to continue.

The performances on the field have had an inevitable impact in the grandstands lately. The average home attendance of 16,455 is the lowest in the history of the club. In a 42,000 capacity, colosseum-style stadium that is almost like a mini-MCG, the low crowd numbers have the ground feeling unnaturally empty and quiet. Before long, tumbleweeds may be spotted rolling through the Gabba on game day, which the Lions players will be desperate to avoid by returning to the on-field success of the early 2000s.