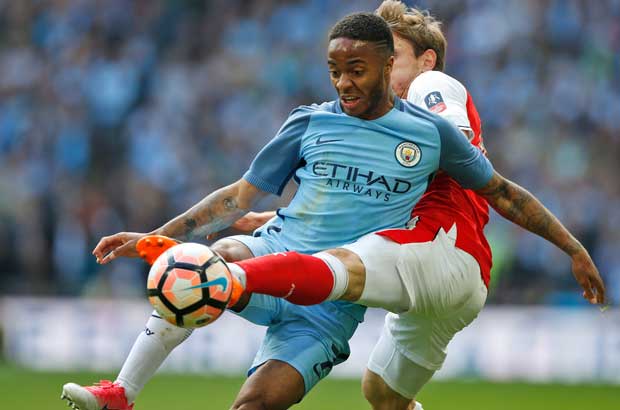 Gunners in the firing line of a stung City

After an upset-ridden midweek round, EPL punters will be keen to get back into the thick of things here.

The first highlight game is the London derby between Crystal Palace and Fulham, where the Cottagers need a result to keep their slim chances of survival alive.

Then Leicester will look for another big result when they welcome the revamped Red Devils to town.

Finally, Manchester City will be striving to put a shock result behind them and dismantle a defensively-suspect Arsenal side.

London derbies are always hard-fought and passionate contests and this one is sure to be no exception.

Fulham are desperately battling for survival in the EPL and Palace fans would love nothing more than to see their wealthier rivals back in the Championship.

The Cottagers' chances of staying up weren't looking great after they went down 2-0 to Brighton on Wednesday morning.

That's before a stunning comeback inspired by Aleksandar Mitrovic saw Fulham prevail at home by four goals to two.

Claudio Ranieri will be hoping to capitalize on that momentum when he takes his team south of the Thames to Selhurst Park.

If Fulham are to stay up, they'll need to start picking up points on their travels.

That's because the Cottagers have the worst away record of any team in either the EPL or the Championship this campaign, having only picked up 2 points on the road all season.

They won't get a better chance to record their first away than in this match-up.

Crystal Palace have one of the worst home records in the EPL this season, and from their 11 games at Selhurst Park, have only scored a measly 6 goals.

Their chances of adding to that tally won't be helped by losing star striker Wilfried Zaha to suspension.

Zaha scored the opener in Palace's 1-1 draw with Southampton on Thursday morning. That's before he needlessly got himself sent of in the final stages for sarcastically clapping referee Andre Mariner's decision to hand him a yellow.

Zaha was handed a second yellow and his marching orders, in what might prove a costly moment for the Eagles in this clash.

Without Zaha, Palace will no doubt look to play through Andros Townsend in attack. The ex-Spurs man had a superb game against his old club in Crystal Palace's recent FA Cup tie, where they progressed to the Round of 16.

But with every point crucial if Fulham want to be playing EPL football next season, that extra desire might just get them over the line.

Reasoning: With more momentum and desire, Fulham should take something from this derby.

The Red Devils won eight consecutive matches under their new gaffer, before they were held to a draw against the Clarets on Wednesday.

It was looking like it was going to be worse for Man U before goals in the 87th and 92nd minutes salvaged a point.

This point may prove pivotal at the season's end, with United in a three-way race with Arsenal and Chelsea for fourth spot and Champions League qualification.

If there has been one player who has really flourished under Solskjaer it has been Paul Pogba.

It was clear that Pogba didn't want to play under Mourinho, and is relishing the positive environment created by the Special One's replacement.

Solskjaer has created this positivity not just off the pitch, but on it too, where the Red Devils are playing a more attacking brand of football.

Pogba has enjoyed this attacking freedom, and has either scored or directly assisted a teammate in all but one of Man U's league matches under Solskjaer.

He will have a big part to play once again, in what will be a tricky away trip for Man U.

Leicester will be full of confidence after holding Liverpool to a draw at Anfield in their midweek match.

This makes the Foxes the only team besides Man City to take something from a trip to Anfield all season in the EPL.

And after victories over Chelsea and the Citizens in the festive period, it is clear that Claude Puel gets his players up for the big games.

After an inconsistent season following his superb display for England at the World Cup, Harry Maguire had arguably his best performance for the Foxes all year.

Not only did the big centre back score Leicester's goal, but he repeatedly did good work in defence to ensure that his side escaped with a point.

He will need to back up that performance for Leicester to earn another point here.

Reasoning: Brimming with good energy and with an extra day's rest, expect the Red Devils to step straight back into the winner's circle here.

The game of the round takes us to Manchester, where a stung City will be looking to get back on track against Arsenal.

Newcastle defied the odds, quite literally, when they handed the Citizens their first defeat of 2019, with the bookies having them listed at $17 to take all three points.

And after Sergio Aguero opened the scoring after just 25 seconds, these EPL odds would've only sky-rocketed.

Perhaps it was because they expected to win without putting any real effort in. Or probably because Newcastle were so organised in defence.

Whatever the reason, the Citizens didn't score again and lost the match 2-1.

It may sound strange considering their league positions, but Man City will find this match easier than the encounter with Newcastle.

Not only do Arsenal have one of the leakiest defences in the league, but they play a style that is more open, which will consequently afford more space for City's attackers to work their magic.

Arsenal's defence shaky at the best of times. But for this clash, they will line-up without two of their defensive pillars.

Both Hector Bellerin and Sokratis will miss through injury, while an injury cloud also hangs over Laurent Koscielny.

Against Cardiff City on Wednesday, Emery was forced to play left-back Nacho Monreal as a centre back, next to Shkodran Mustafi.

While these two were able to limit Cardiff City to a solitary goal, it is expected to be a whole other story against City.

As Arsenal will struggle to limit the goals conceded, their only realistic chance of getting a result from this match is to score plenty at the other end.

Aubameyang and Lacazette are a deadly duo that would give headaches to any defence, while Mesut Ozil finally earnt a first-team start against Cardiff after a lengthy exile from the starting eleven.

These three have more than enough quality to combine for a handful of goals.

But against a Man City side hungry for redemption, it's going to be tough.

Reasoning: With both teams more than capable of finding the back of the net, this bet is the best way to get some value for what should be a dominant City win.