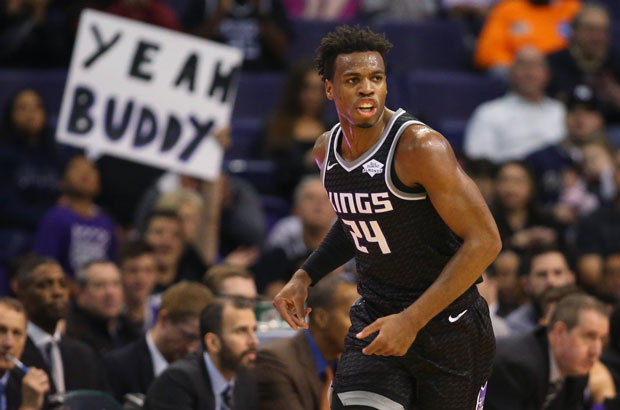 Friday's feast of games tips off with an absolute belter. The Indiana Pacers and Philadelphia 76ers both battling for the 30th win of their campaigns.

Then, Sacramento will be looking to continue their stellar season and keep in touch with a playoffs spot. They travel to Charlotte to take on the Hornets in what is expected to be a tight affair.

Finally, a LeBron-less Lakers will face the tough task of outplaying Oklahoma City on their home court.

This mouth-watering match-up has big ramifications for the East, with both teams aiming for top spot and the number one playoffs seed.

Both franchises sit on 29 wins for the season, with the Pacers just ahead on the table with two less defeats.

They will welcome the 76ers, who are fresh off a monster victory over Minnesota.

The team from Philly put 149 points on the board, with seven players getting their points tally into double digits.

Jimmy Butler was great in his first game against his former club, while Ben Simmons impressed with just one assist short of another triple-double.

But the star once again was centre Joel Embiid, whose 31 points included 12 points from deep, where he shot 4 from 6.

However, the biggest positive was the fact that these three players all gelled together in offense, for the first time since Butler's trade form the Timberwolves.

If Brett Brown can get these three to compliment each other, the Sixers will be a force to be reckoned with in playoffs.

The Pacers meanwhile have been quietly going about their business, winning all the games they should be.

Last time out they put the Suns to the sword by 34 points.

The great news for Pacers fans is that they did this without much of a contribution from star man Victor Oladipo, who only shot 8 points at a woeful 18%.

Instead, the experience of Bojan Bogdanovic and Tyreke Evans led the way, each with 20 points.

The reason behind Indiana's success this season has been their shooting percentage, which currently sits at 48%.

Only Golden State have a better shooting percentage in the league, demonstrating Indiana's ability to make the most of their chances.

However, Philly also shoot the ball well, with the seventh best percentage in the league at 47%.

Take the numbers from just the last three games and the Sixers percentage rockets up to 53%.

This suggests that Philadelphia's offence is clicking, and why they will be hard to hold out.

Reasoning: With their star power coming to the boil, Philly are set to continue their good form of late.

One of the most enjoyable aspects of this NBA season from a neutral's perspective has been the success of the Kings.

After languishing down the bottom of the ladder for several seasons, the team from California are starting to see the fruits of their rebuilding phase.

De'Aaron Fox has had a stellar sophomore season, while Buddy Hield is starting to play at his potential.

As well as getting the results, the Kings have been playing exciting, free-scoring basketball.

They are averaging 115 points per game, which is the sixth-best figure in the league.

The Kings haven't been afraid to take shots from beyond the arc, with Buddy Hield in particular finding success from deep.

He has recorded the third-most three-pointers this season, with only James Harden and Steph Curry netting more.

Performing up with this kind of company demonstrates just how valuable Hield has been for Sacramento this campaign.

Key to Charlotte's game plan will be stopping Hield, especially shooting from distance.

They will be looking forward to this home game that brings an end to their six-game road trip.

The Hornets play a similar, high scoring brand of basketball to the Kings. And just like Sacramento, they get 31% of their points from three-pointers.

Kemba Walker is their star man, and he loves nothing more than shooting from deep.

This tendency to shoot threes probably cost the Hornets the win when they last played the Kings on January 13.

Despite putting up 31 points, Walker only made 3 of his 12 three-point attempts, while Hield fared slightly better, making 5 of his 12 attempts.

But since that defeat, the Hornets came out and accounted for San Antonio by 15 points.

Walker was outstanding from deep, shooting 7 from his 13 attempts.

In good form from beyond the arc, look for Walker to have a huge game.

Reasoning: The Hornets will be up for their first home game in a while, with Kemba ready to explode.

Friday's NBA action is rounded out in Oklahoma City when the Lakers come to town.

LeBron won't be on the plane, as he still waits to make a recovery from a groin injury.

The Thunder will be wary of becoming complacent though, especially after their last match effort where they were sensationally routed by the Atlanta Hawks.

The Lakers meanwhile are coming off a win.

In their last outing, the LA franchise proved too much for the Bulls to handle, winning at home by seven points.

Lonzo Ball had arguably his best game of the season with 19 points, 8 rebounds and 6 assists.

These two will be crucial to LA's chances in Oklahoma City, and will need to play beyond their years.

That's because they will come up against the likes of Russell Westbrook and Paul George, two of the West's best.

Westbrook is up to his usual all-court dominance, leading the league with 13 triple-doubles this campaign.

But it has been George who has really excelled, especially in recent months.

The former Pacer is putting down career-best numbers, averaging 27 points and 8 rebounds a game.

There have even been whispers that he's edging himself into MVP contention.

The Thunder have the ninth-best defence in the league, conceding 108 points per game.

This stat has taken a hit in the last week, with OKC conceding a whopping 136 points per game in their previous three.

And after the Hawks put 142 on the board last time out, you can bet that Billy Donovan will have had his team doing defensive drill after defensive drill in the lead-up to this clash.

Reasoning: Considering the way OKC have been defending of late, the Lakers with 10 points up their sleeve looks a good bet.