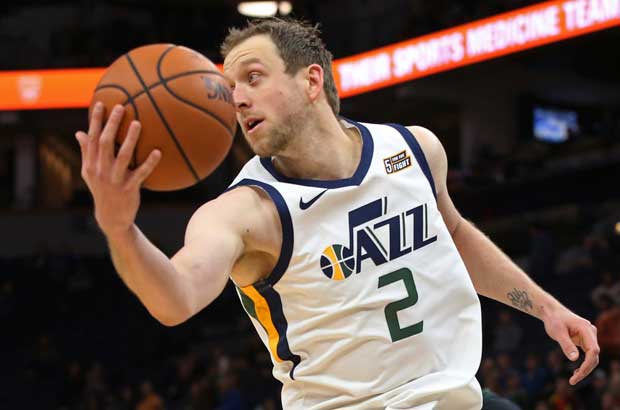 First up, the Knicks head to Boston as they aim to replicate their success of two weeks ago.

Then Phoenix will fly up to Portland where both teams are aiming to snap a losing streak.

But the highlight will be in Utah, as Joe Ingles' Jazz come up against reigning MVP James Harden and his Rockets.

The opening fixture on Friday has a classic NBA feel to it, with two of the competition's foundation clubs facing off.

The venue is the TD Garden, where Boston will look to continue their mid-season revival and record their fourth win on the bounce.

After a slow start to their campaign, it appears the Celtics have finally worked out how to play with so much talent on their side of the court.

This is typified by Gordon Hayward, who has only looked stronger the longer the season has gone on.

Last time out against the Timberwolves, Hayward had 30 points, 9 rebounds and 8 assists in a commanding performance.

When either Hayward or Kyrie Irving are firing, it allows the younger generation of Jayson Tatum and Marcus Smart to come in and not feel like they have to contribute much to the scoring.

With so many avenues to the basket, New York will be hard pressed to contain the Celtics here.

They are a team really struggling without star man Kristaps Porzingis.

The Latvian giant has had a long lay-off with injury, and will be looking to return in the new year to give his team a well needed boost.

However, at 8 and 17, the Knicks aren't entirely without a shot of making the playoffs.

Especially if they continue to produce results like the overtime win against Milwaukee last Sunday.

The Knicks were outstanding from beyond the arc that day, shooting 20 3-pointers at 0.588%.

This effort wasn't sustainable though, as in their subsequent game, New York lost to Washington after shooting at only 0.353% from deep.

However, the Knicks do have recent history in their favour. These teams last met at this venue on November 21, where Boston went down 117-109.

Reasoning: If the Celtics really have figured their offence out, the Knicks will be blown away.

The Phoenix Suns look to be in a world of pain.

Anchored to the bottom of the Western Conference ladder with just 4 wins from 24 games, Phoenix look well on their way to finishing in that position for the third season running.

And the bad news continues, with star guard Devin Booker recently suffering a hamstring injury that is expected to sideline him for around a month.

Booker is averaging 24 points and 7 assists per game, streets ahead of his teammates as the most influential player in offense.

T.J. Warren who averages 18 points and Trevor Ariza with 3 assists per game are the next best in these statistical categories.

The one shining light of Phoenix is their first overall draft pick Deandre Ayton.

The 216cm big man has had an impressive debut season to date, with 16 points and 10 boards per game.

He will need to put in the performance of his young career if the Suns have any chance in Portland.

That's because the Trail Blazers are always solid at home.

However, in two of their previous three home games, they have gone down by very narrow margins.

First was the 4-point defeat to the Clippers on November 26, then the 1-point loss to the Nuggets on December 1.

On both of these occasions, the Blazers had awful numbers from beyond the arc, with Damian Lillard in particular squandering chance after chance from deep.

It has been a similar story on the road in Portland's previous two, where they suffered defeats to Dallas and San Antonio.

Despite putting up 33 and 37 points in these games respectively, Lillard shot a combined 5/19 from three-point range.

If Lillard has been putting in work on the training court, he has more than enough quality to start hitting his shots from deep.

Even if he doesn't, Portland still have too many points in them not to be winning.

Reasoning: After three straight losses, Portland will be hungry for a huge win over the struggling and Booker-less Suns.

The highlight game on Friday sees two of the West's underachievers attempt to turn their campaign around with a strong win.

Heading into the 2018/19 NBA season, these were two teams that were forecast to be right up near the summit of the Western Conference ladder.

As things currently stand, the Jazz are in 11th and the Rockets are 13th.

But with only 5 wins between them and the top of the ladder, the situation could change very quickly.

The Jazz look to be the team with the better form heading in. They've won three of their past four, including a 34-point demolition of San Antonio last time out.

The strength of Utah is their spread of scoring. While young gun Donovan Mitchell leads the way with an average of 21 points per game this season, there is plenty of depth in Utah's list.

One player who often gets overlooked amongst the young talent at the Jazz is Australian Small Forward Joe Ingles.

Ingles does a bit of everything on the court: scoring, rebounding, assisting and stealing.

But the strength of "Jinglin' Joe" is his 3-point shooting. The Aussie has scored the 5th-most 3-pointers for players in his position this campaign.

With fellow Australian Dante Exum also providing quality off the bench, the Jazz have plenty of points in them.

They come up against the Rockets, who are having trouble putting the points on the board this season.

When the Rockets are hot, there is no better offensive team in the NBA. They put a large focus on 3-point shooting, with reigning MVP James Harden leading the way from the backcourt.

Harden himself is having another stellar campaign. He is the current league-leader in points per game with 31.

It's Houston's other players, most notably the veteran trio of Chris Paul, Eric Gordon and Carmelo Anthony who are letting the side down.

They all have a poor shooting percentage this season, which is partly why the Rockets have been struggling.

And after managing just 9 points in their last quarter of basketball against the T-Wolves, a big improvement is required here.

Reasoning: Based on the Utah's monster victory at home last time, they should win handsomely against a struggling Houston.