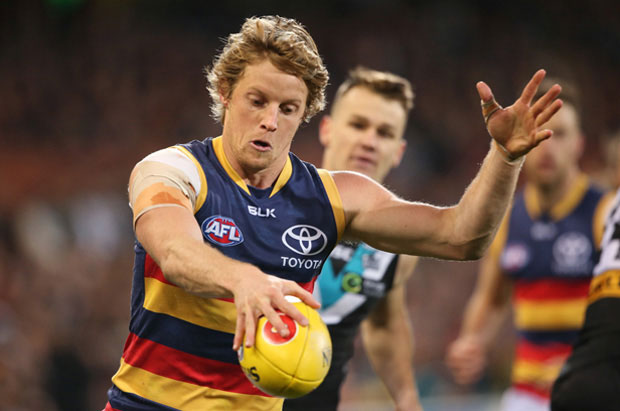 The always fierce, always entertaining, and often see-sawing Adelaide derby highlights Saturday's AFL action, with both sides playing for their fifth win of the campaign.

Before that, the Demons will want to keep the ball rolling when they travel up to the Gold Coast.

And the Saints face a tough task when the Eagles come to town.

The Demons broke through for their second win of 2019 last week, in a nail-biter against the Hawks.

While the four competition points came as a massive relief, they still have a long way to go to get their season back on track.

Gold Coast will be looking to spoil any possible Melbourne resurgence with a much-needed four points of their own.

After now losing 3 straight since their stellar start to the season, the Suns won't have a better opportunity of turning their form around.

Considering that after this clash, the Suns face Port Adelaide, Geelong and GWS, this game against Melbourne becomes must-win.

While AFL coaches like to drill the mantras of "one game at a time" and "taking it week by week" into their players, there's no doubt that Stuart Dew would've targeted this game.

The Dees were only good in patches last week, and if the Suns bring their best, they will be pulling off the upset.

Especially if they can win the contested footy.

This is where they have surprised teams in 2019, and how they kept it competitive out west against the Eagles in Round 7.

It's been often repeated in 2019, but if the Dees bring their best, they'll win handsomely.

However, save patches against Sydney and Hawthorn, Melbourne have looked nowhere near their best this campaign.

It doesn't help that they have the biggest injury list of any AFL side at the moment.

Having said that, it shouldn't be an excuse for the performances they've been dishing up.

If players like Christian Petracca and Jeff Garlett don't step up, then the Dees simply won't have enough points to get over the line.

Reasoning: This is a big line for the Suns who have shown plenty of fight in 2019.

What's happened to the Eagles?

The West Coast mob have been far from impressive in recent weeks, with heavy defeats to Port and Geelong followed up by an ugly win over Gold Coast last week.

Nevertheless, they start as strong favourites in the AFL odds, which probably says more about St Kilda.

The Saints have finally come off the boil as many expected them to, and will be trying to re-ignite the flame with a win here.

After a sensational start to the season, the Saints have now lost two on the trot, following last round's 44-point defeat to GWS.

However, take away the first quarter, and St Kilda were arguably the better team.

In fact, the Saints dominated the midfield, and only have poor execution to blame.

They had 62 entries inside 50. Compare that with GWS who only managed 42, and yet were clinical, leading to their big margin of victory.

If they can add some polish to their evident effort, then they might give the Eagles a scare.

The good teams find a way to win ugly, and that's what West Coast did against the Suns.

While the margin of victory was a good 23 points, you could make an argument that the Eagles didn't deserve to win.

If the Saints can contain him and Jack Darling who booted a bag of 4, then it's hard to see where West Coast's goals will come from, against a stubborn St Kilda defence.

Reasoning: While a few of the key signs are pointing towards the Saints, West Coast have more firepower and could scrape over the line.

The Showdown takes centre stage on Saturday night, and if it's anything like the two matches from last season, this is set to be a belter.

Both Adelaide derbies in 2018 were decided by a goal or less. Port won the first by 5 points, but were then beaten by the Crows by just 3.

Besides that Port Adelaide win, the Crows have dominated this fixture of late, and off the back of three straight wins, it's hard to bet against them.

But the Power have pulled off some huge performances in 2019, and are sure to be up for this one.

Despite going down by 39 points to an impressive Collingwood side last week, Port weren't totally disgraced.

In fact, take away the first quarter where the Pies booted seven goals to none, and the Power would've come out on top.

If you go to their previous form, Port won two straight games against the Eagles and Kangaroos.

Therefore, don't be fooled into thinking that the Crows are the only side with good form coming in.

Having said that, this match tends to be won by the team that turns up on the day, with recent form often going out the window.

Adelaide look to be slowly but surely getting back to their impressive form of 2016 and 2017.

Don Pyke won't want his players to rest on their laurels after three straight wins, but rather go on to bigger and better things.

A win over Port would be a step in the right direction, as they continue their surge up the ladder.

But given their proximity on the ladder, and their recent form coming in, everything is pointing to a close game.

If Adelaide's big players can stand up in the clutch moments, the they'll get the win.

Reasoning: Everything points towards a close game here.