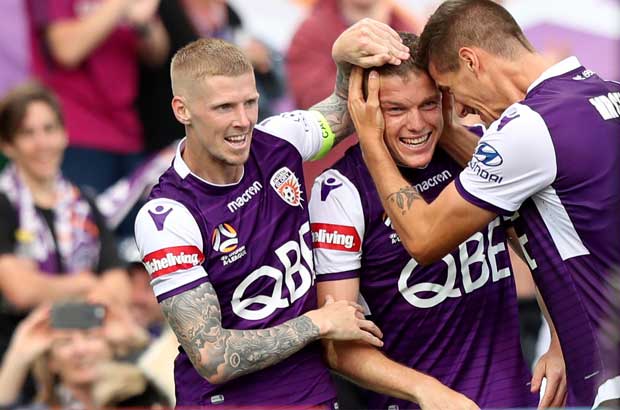 Who takes the Glory in the Distance Derby?

Two top-of-the-table clashes to get excited about this week, highlighted by Wellington's trip to Perth in the Distance Derby.

After that, Melbourne City will look to overcome a mini-hoodoo when they face Sydney FC.

But before these standout fixtures, Central Coast will be aiming for their second win of the campaign when they host Melbourne Victory.

Despite being anchored to the bottom of the table, the Central Coast Mariners have been very competitive of late.

After notching up their first win of the season against Melbourne City on January 16, the Mariners have recorded one draw and two defeats by just a solitary goal.

They looked on track for another point last time out, before an injury-time winner to Adelaide United's George Blackwood sunk the Mariners.

After a relatively positive string of results, Central Coast need to be careful not to let this disappointing defeat get them down.

This is especially the case with Victory coming to town, who, when in the mood, can really pile on the goals.

Mike Mulvey faces a tough task in engineering a game plan that will stop the free-scoring Melbournians.

This will surely see the home side sitting deep, and playing largely on the counter-attack.

It was this method that they used to great success against City when they came to Gosford. The Mariners had just 36% of the possession, but won the match 2-1.

The speed of Connor Pain caused City's defence troubles, while Matt Simon was his usual pestering self up top.

These two will need to have standout games for the Mariners to get anything out of this clash.

Melbourne Victory will be coming into this one full of confidence after once again getting the better of Sydney FC in the Big Blue.

Even without marquee player Keisuke Honda, the Victory have plenty of attacking weapons.

Their other big-name signing Ola Toivenen scored the opener against Sydney with a stunning free kick.

This is the kind of technical quality that the Mariners lack, and why they are deserved underdogs here.

They better be careful and make sure their minds are on the job here, because the last time Victory played away from home, they routed the Roar by five goals to nil.

Reasoning: After a morale-crushing defeat, the Mariners will struggle against the classy visitors.

It's 1st hosting 6th in the so-called "Distance Derby", in what promises to be the game of the round.

After critics and nay-sayers were predicting the end of ladder-leading Perth Glory last week after two consecutive nil-nil draws, they came out and made a statement, winning 2-0.

That makes it three clean sheets in a row for Tony Popovic's men, who have finally sorted out their problems at the back.

This was the last missing piece of the puzzle in Perth's quest to claim the Premiership.

Glory had been scoring goals for fun all season, but unusually for a Popovic side, struggled to keep clean sheets.

However, with the long awaited return of former Socceroo Matthew Spiranovic from injury, this has all changed.

Spiranovic was one of the key members of the Wanderers side that Popovic won the Asian Champions League with.

This proven winning record will stand Glory in good stead of going all the way this campaign, and finally breaking their A-League drought.

While it won't be easy against a resurgent Wellington side, Perth will be boosted by the inclusion of Chris Ikonimedes, who returns home from the Asian Cup.

Ikonimedes will look to get straight back on the score sheet here.

While Perth are favourites for a reason, there has been no better A-League side in the past two months than Wellington.

In fact, since these teams last played on December 2 in New Zealand, the Phoenix have won six games, drawn three and only lost one.

This turnaround has been spearheaded by Roy Krishna and Sarpreet Singh, who are forging one of the league's most dangerous attacking duos.

But more than two players, the success has been the team's ability to build off the momentum and positivity created by head coach Mark Rudan.

With the form they've been in, don't be surprised if Wellington produce an upset here.

Reasoning: With Perth looking the complete package, this is a tough ask for Wellington who face the added disadvantage of playing after the notoriously long flight in this Distance Derby.

Another cracking match-up sees 3rd take on 4th in a match that has big implications for the race for a coveted top two spot.

Sitting five points behind the Sky Blues on the ladder, Melbourne City can just about wave their chances of a top two spot goodbye if they taste defeat here.

After a stellar start to 2019 with three straight wins, the Citizens have since only claimed 4 points from their next four games.

It would've been a lot less if not for a 94th minute winner against the Wanderers two matchweeks ago.

Warren Joyce will be using every trick in the book to try and get his players up for this tough away trip.

He has really prioritized youth this campaign, in an approach that has worked thus far.

But against a team like Sydney jam-packed with premiership-winning experience, it wouldn't surprise to see City on the end of a thumping here.

The Sky Blues' great run of form was ended in the Big Blue last week, where they went down 2-1.

It is clear that this isn't the same Sydney team that enjoyed so much success under Graham Arnold.

However, Steve Corica is doing well to get the results, even if it doesn't look pretty.

With Alex Brosque and Milos Ninkovic now in the twilight of their accomplished careers, this season might be Sydney's last chance of winning the title for a while.

Another three points here and Sydney will keep the pressure on Victory and Glory, in what is emerging as a three-way race for the Premiership.

Sydney will hope their recent form against City stands up.

That's because they have dominated this fixture of late, including scoring 7 goals to nil across the previous two games these teams have played.

Reasoning: Going on recent form alone, you can't tip any other result.