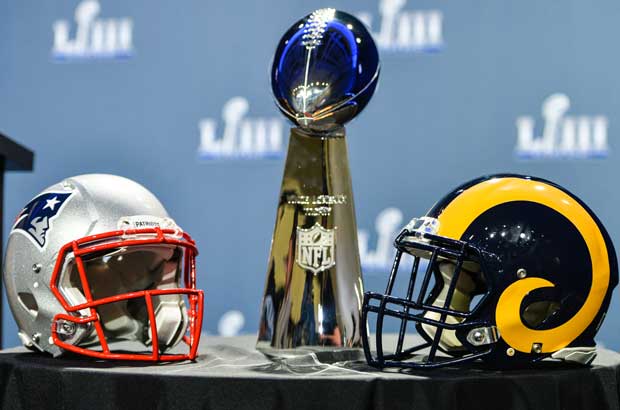 Out with the old, in with the new

Over the past 20 years, there has been no greater dynasty in world sport than the New England Patriots.

Spearheaded by future hall of fame pairing Bill Belichick and Tom Brady, the Patriots era of dominance reaches new heights this weekend as Super Bowl LIII marks their fifth trip to the big show in the last 10 years.

A win for Brady would make him the only player to  have ever won six Super Bowls, overtaking former record holder Charles Haley and cementing himself as the greatest of all time.

In an ironic twist, the Pats will face the Rams, the team that Brady and Belichick overcame to clinch their first ring together in the 2001/02 season. With Boston's favourite son now nearing retirement, a loss to the newly located franchise could spell the end of the New England era, coming full circle.

The NFL has been looking for its next star pairing and LA fans will be hoping that QB Jared Goff and Coach Sean McVay stand tall in the biggest show of all.

To place this match-up in perspective, when Belichick and Brady won their first Super Bowl together, McVay was 16 years old and Goff was just 7.

It is for this reason pundits are touting this as a clash between old wisdom and the new kids on the block.

The Key to a Patriots win

For most Super Bowl contenders, their chances of victory heavily depend on the quarterback's ability to perform on the big stage. New England don't carry this burden.

Every team knows what they are facing in Tom Brady. The man isn’t fast or flashy but always manages to be a step ahead of the rest. He thrives off a challenge and has a proven ability to grind out Super Bowls on his terms. Each of his previous nine Super Bowl appearances has been decided by 8 points or less.

The key to New England’s prospects is their rushing game. Since the Belichick-Brady era began in 2000, they are 11-0 in the postseason when a player rushes for 100 yards and 51-1 in the regular season.

Sony Michel and James White have been critical for the Pats throughout the season, often called on by Brady to help settle down the offense in tough situations and allow him time to develop plays.

White in particular, has come into his own throughout the Playoffs. The running back caught 87 passes during the regular season, added a whopping 15 receptions in the divisional playoff win over the Chargers, and then tacked on another four grabs in the AFC Championship Game win.

His ability to produce in the screen game and create match-ups underneath linebackers is crucial to the Patriots' passing attack, especially on third downs.

With an aggressive Rams defensive planned, expect to see a lot of wide screens used early by Brady, allowing a quick release and throw.

How the Rams can turn the tide

Brady’s only cause for concern has to be the Rams defense. All season, both Defensive MVP candidate Aaron Donald and veteran Ndamukong Suh,  have been given freedom to hunt QBs in anyway they please.

Defensive co-ordinator Wade Phillips is no stranger to New England.  He was a key component when the Denver Broncos put on a defensive masterclass to beat the Patriots in the AFC title match on their way to Superbowl L.

Can Jared Goff hold his nerve?

In all three of the Rams’ regular season losses, the common denominator was turnovers. It’s no secret that Goff has moments of uncertainty. He threw an interception against the Saints, threw four against the Bears and was responsible for two turnovers in a loss to the Eagles. Additionally, Goff fumbled 12 times in the regular season, which is tied for the most in the league.

The Patriots have a simple defensive philosophy for big games; Find out what the other guys do best, take it away from them and make them do things that they are uncomfortable with.

If New England can successfully execute this, you can expect Goff to be throwing plenty of long balls. Throughout the regular season, Goff threw 24 incomplete or intercepted deep passes which should have been completed according to the NFL’s Next Gen Stats. This was more than anybody else in the league.

It should also be concerning for the Rams defensive line that the Patriots sack rate went from 3.8% in the first 12 games, to 8.1% in the last six. These figures all point to the Patriots bringing heat onto the quarterback while loading the box up with men to force long throws down the ground.

Before the season started, our NFL season preview outlined that both LA teams would give the competition a real shake. While the Chargers fell short of the main stage, the Rams proved doubters wrong by putting in high quality and determined efforts all throughout the year.

Everywhere you look in the Rams team, there is star quality. In more positive news for Coach McVay star running back Todd Gurley appears to have overcome an injury which has impacted his recent performances. If Gurley is 100%, he will be a handful to contain and could be the X-factor in a very tight game.

While the Patriots have strong claims for the game and deserve to go in as favourites, this match feels different from previous years given the youthful vibrance that the Rams have brought to the league this season.

Now is the time for the passing of the torch to the next generation of greatness.