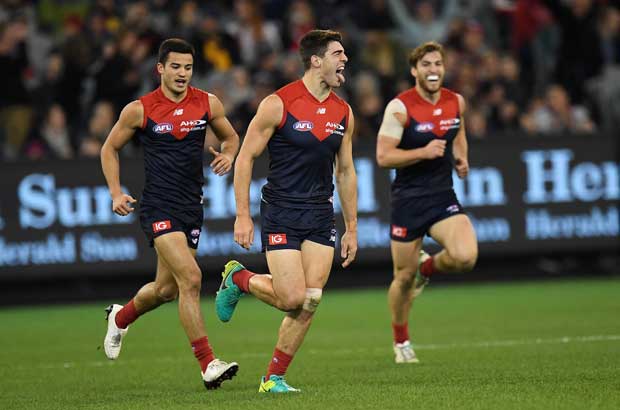 Jump To: Richmond vs Collingwood West Coast vs Melbourne

Every neutral in this wide brown land will be barracking for the Demons to keep their fairy tale going.

Not only would that set up a dream Grand Final against either Richmond or Collingwood, but it would bring much needed joy to a set of supporters who have spent season after season starved of success.

Before this finals appearance, the last time the Dees were even playing in September was way back in 2006, which coincidentally was the same year the Eagles won the flag.

In their shiny new stadium that sold out in the blink of an eye, West Coast and their parochial fans will be relishing the thought that the AFL world wants them to topple over.

They would love nothing more than ending the Demons fairy tale run.

Interestingly, this incredible forward momentum started in Round 22 when the Dees made the exact same trip to Optus Stadium, triumphing by 17 points.

This result exorcised Melbourne's top eight demons, having not defeated a top eight team until then in 2018.

And since this impressive away victory, the Dees can't stop beating the best.

Consecutive victories over the Giants, Cats and Hawks in the last month have many believing the team from Melbourne are on the brink of their first flag in 54 years.

But the Eagles shouldn't be underestimated. Don't forget that when the Dees got the four points in Round 22, the home side were without their attacking spearhead Josh Kennedy.

A nail-biting, edge-of-the-seat thriller is on the cards.

A sunny day forecast for Perth. These high-scoring teams will enjoy the favourable conditions.

To say that the Dees have an advantage in the middle of the park is an understatement, as this table demonstrates. 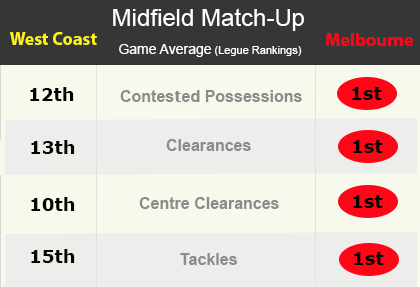 With such a massive advantage in contested possessions, clearances and tackles, the Eagles will have to be at their best to limit their loses in the midfield.

What's more is that these season averages are flattering for the Eagles.

For most of the year, West Coast's star midfielder Andrew Gaff was contributing to these numbers, playing like one of the Brownlow favourites in the process.

But that changed in Round 20, when he floored 18-year-old Docker Andrew Brayshaw with a sickening punch, that saw Gaff rubbed out for the year with a deserved lengthy suspension.

In a fascinating storyline, Brayshaw's older brother Angus is one of Melbourne's best mids, and you can be bet that he'll rev up his teammates to get stuck right in to the Eagles players in this clash.

Further skewing the midfield advantage in Melbourne's favour is the fact that the Dees played most of the year without tough nut Jack Viney, who made his return from injury in the first week of finals.

Viney has been outstanding in the middle of the park since making his return, adding toughness and brute strength to an already hardened Demons midfield.

And with big ruckman and second Brownlow favourite Max Gawn in imperious form, West Coast's mids will struggle to even get their hands on the ball in the centre.

Considering the Eagles look to be so thoroughly outclassed in the midfield, they will need to look to both their attack and defence to get them over the line.

Unfortunately for West Coast, the Demons' attack is just as potent as their own, featuring several channels to goal.

Indeed, the Dees average a league high fifteen goals per game, while the Eagles rank third with thirteen majors each match.

Therefore, the team from the West will be relying heavily on their defence.

Luckily, they have an advantage here, with players like Jeremy McGovern and Shannon Hurn amongst the best defenders in the AFL.

Both players are expert at cutting off the ball, and then launching counter-attacks from the half back line.

Hurn has a booming boot and he is capable of sending it long and taking the midfield out of the equation.

McGovern meanwhile is the intercept mark king, with an uncanny ability to read the flight of the ball better than anyone else in the league.

He is also a player that steps up in the big matches, exemplified by his Round 17 performance against the Magpies.

A similar performance is required, especially as talented defender Brad Sheppard has been ruled out with a hamstring injury.

On the Melbourne side, young defender Oscar McDonald is set for a make or break performance, tasked with stopping the lethal duo of Kennedy and Jack Darling.

While Melbourne's defence is certainly their weakest link, it has lately improved out of sight.

All aspects of Melbourne's game have been enhanced in the last month and a bit, as they ride an incredible wave of momentum towards Grand Final glory.

Based on what the numbers are saying, the Dees look to be excellent value as the outsiders.

Reasoning: The Demons have far too much upside, and when they get it right, are unstoppable.

There's a chance they may choke in front of a raucous West Coast home crowd, but based on their recent momentum, this doesn't look likely.