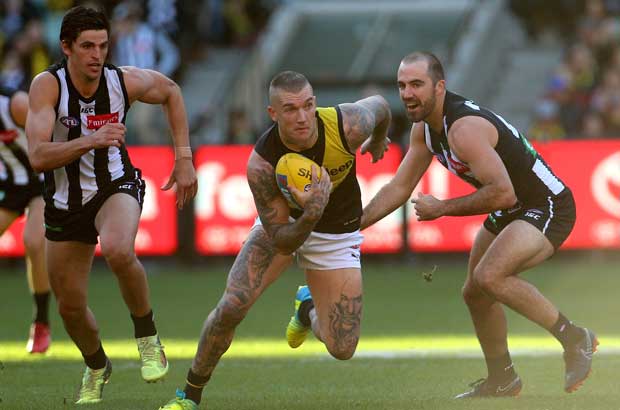 Jump To: West Coast vs Melbourne Richmond vs Collingwood

It has been touted as the biggest prelim of all time, with the two heavyweights of the AFL world set to collide in a colossal clash on Friday night.

With the combined membership of both clubs exceeding 180,000 people, die-hard fans were spotted camping out overnight just to buy a ticket.

It's no surprise then that the game sold out in half an hour, especially considering that this is the first time these sides have met in September in 38 years.

That was in the 1980 Grand Final, when the Tigers triumphed by a tremendous 81 points.

You know the game will be much closer here, with the atmosphere at the MCG set to be unlike anything witnessed in AFL history.

You can be sure that rival fans will be bellowing abuse at each other, as the players get stuck in on the pitch.

These teams have twice met in 2018, resulting in two Richmond victories.

The Magpies will need to find something to not only progress to the Big Dance, but to snap Richmond's insane MCG winning streak.

The Tigers haven't lost at the 'G since Round 13, 2017, and are in the box seat to make it back-to-back premierships.

Perfect conditions, which if anything will favour Collingwood's high-possession style of play.

How they match up

The central reason why the Tigers have won 22-straight at the 'G is that their playing style of full-throttle, high-pressure footy feeds off their vocal supporters.

They play contest to contest, doing whatever is necessary to send the ball forward, where Jack Reiwoldt leads a small and pacey forward line.

Collingwood meanwhile have a gun midfield that likes to dish off plenty of handballs, always finding a teammate in better space.

Their ability to win and then control the ball is the undoubted strength of the Magpies' game.

The Pies need to capitalise on their advantage in both contested and uncontested possessions. They will have more of the ball, and therefore, more opportunity to generate points on the board.

Another key advantage that the Magpies have is in height.

The Tigers' defensive structure sees them set up to force the opposition to kick long down the line.

This tactic could play against them against a team like Collingwood, who boast the likes of the two-metre plus giants of Brodie Grundy and Mason Cox in their ranks.

With even more tall timbre in the form of Jordan De Goey and Brody Mihocek in attack, the Pies should have an advantage when it comes to marking the ball, especially inside 50.

Remarkably, Richmond are ranked 2nd in the league for marks inside 50, a stat that is often overlooked.

For a small forward line, this is a great return.

Of course, much of this is down to this year's Coleman medallist Jack Reiwoldt, who is in career-best form.

But it is Richmond's pace that allows them to find space in the forward 50, and why they enjoy so many free shots at goal.

Collingwood's Jeremy Howe will need to be at his high-flying best to negate this marking advantage that the Tigers have.

Collingwood will no doubt analyse both losses against the Tigers this year to look at where they went wrong.

In Round 6, the Pies got smashed in the contested possession numbers, an area that they should be winning.

Interestingly, the Magpies were superior when it came to using the ball effectively. This suggests that if they won more in the scrap, they had the hand and foot skills to pull off a win.

In Round 19, the total opposite was the case.

While the Pies won more of the tough stuff, they succumbed to Richmond's fearsome tackling pressure, letting their effective disposal percentage suffer.

Putting it simply, for Collingwood to prevail, they need to be perfect, and win both the contested possessions and effective disposal percentage stats.

Richmond meanwhile still need to perform at their best.

However, you feel that more of their game can go wrong, and yet still be enough to come out on top.

Despite his well-documented corkie, Dustin Martin is a game-breaker, and ready to have a huge game.

But it is the often overlooked players like defender Dylan Grimes who are so important to this side.

He faces the task of stopping De Goey, who is fresh off a game-winning performance against the Giants.

Grimes is more than capable of getting the job done.

And with all of Richmond's young talent only playing better than they were this time last year, the Yellow and Black should be up and about.

Reasoning: Expect another improvement from the Pies after their Round 19 loss by 28 points, especially as gun Pies midfielder Adam Treloar wasn't playing that day.

But all year the Tigers have found a way to win in Melbourne. They look the goods once again.