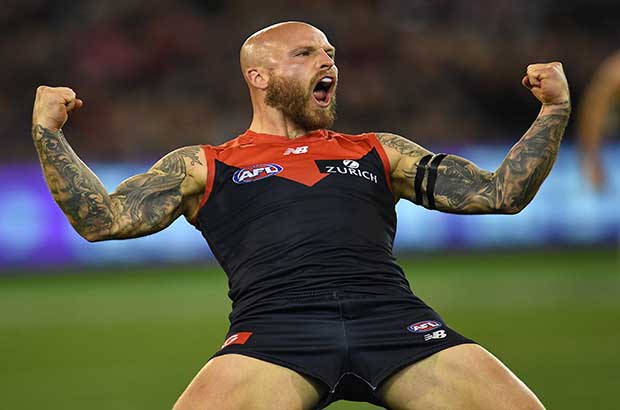 Jump To: Collingwoods vs GWS Hawthorn vs Melbourne

There's a smell wafting through the streets of Melbourne, mingling with the ever-present aroma of roasted organic coffee beans.

The smell of yet another AFL fairytale.

Many punters are of the belief that after spending so many years in AFL wilderness, the Demons are on the verge of claiming their first flag in 54 years, completing the trifecta of fairytales.

Their dynamic and 'attack at all costs' style of footy is reminiscent of both the Dogs and the Tigers before them.

This is why, if they play at their best, they will make light work of the Hawks.

While Melbourne's momentum is mounting with consecutive wins over the Eagles, Giants and Cats, Hawthorn had the handbrake put on their forward thrust with a meek performance against the Tigers last week.

They lost by 31, but it could easily have been more.

Alastair Clarkson will need to orchestrate another tactical masterclass if the Hawks have any chance here.

You wouldn't put it past the four-time premiership coach.

Especially considering that when these teams last met in Round 4, the Hawks did a demolition job on the Demons in a dominant 67-point win.

Part of the reason why the Hawks looked so poor against the Tigers was their below-par effective disposal percentage.

The main strength of Hawthorn's game over the last decade has been their ability to use the ball effectively, especially in the big moments.

Their supreme hand and foot skills has been a trademark of their game this year as well.

However, finals footy is a different beast, and Hawthorn looked flustered in possession, continually turning over the ball.

While Melbourne's pressure isn't quite as ferocious as Richmond's, they will no doubt make it their mission to fluster the usually unflappable Hawks at every opportunity.

The scary fact for Hawthorn fans is that the Demons also used the ball wastefully in their game against Geelong.

The Dees absolutely butchered the ball in front of goal, and yet still won by 29 points.

With the amount of chances they had, Simon Goodwin's men could easily have won by fifty or more.

Where it will be won

The problem for Hawthorn is that they face an uphill battle just to be on par with Melbourne's contested possession-winning capabilities.

As the Demons win so much more of the ball, especially in the midfield, they generate so many more scoring opportunities each game.

Hawthorn star and Brownlow medal favourite Tom Mitchell had a blinder against the Cats, racking up a mammoth 23 contested possessions and booting a goal.

You don't feel he can do much more here, so it's up to Hawthorn's other players to stand up.

Clarkson needs to get more out of his younger players, especially with the likes of Conner Nash, James Worpel and Harry Morrison all being largely anonymous in their first finals appearance last week.

They will all be better for that experience, so you can't completely discount Hawthorn's chances of winning.

However, another worrying reality for the Hawks is that it was Melbourne's fringe players who were amongst their best last week.

The dynamic attacking weapons of Christian Petracca and Jake Melksham both had quiet games.

Look for a big improvement from these two, which would tip the scales further in Melbourne's favour.

Fine conditions, which means a high-scoring final is on the cards.

Reasoning: With a game style and momentum that recent years have shown is tailor made for finals footy, Melbourne should win and win by a margin.