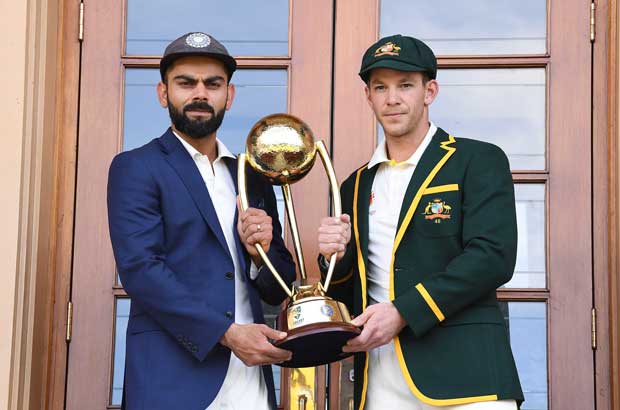 No excuses for India

The Australian sporting focus shifts to Test Cricket this Thursday, with the Aussies looking to come out and make a statement at the Adelaide Oval.

With no David Warner or Steve Smith after the now infamous ball tampering scandal in March, Australia have lost not only their captain and vice captain, but their two best batters, and two outstanding fielders to boot.

Australia are yet to win a test match since Warner and Smith were given a year-long ban. In this time, in all formats, Australia's batting order has looked very shaky, often suffering major collapses.

And that's why experts are talking about this series as India's best ever chance to win on Australian soil. The tourists are yet to taste series victory in Australia from eleven trips down under.

With Indian megastar and arguably the best batsman of his generation Virat Kohli leading the way, this series promises to be an absolute cracker.

This is where the tourists have a key advantage, not just because of the strength of their line-up, but the weakness of the Aussie top and middle order on paper.

The key man from an Australian point of view is Usman Khawaja. The undoubted class batsman of the Aussie side, Khawaja will need to lead the way if they have any chance of winning the series.

Khawaja has a current test average of 43.83. However, he tends to flourish on home soil, where his batting average soars to an impressive 59.38. The hard pitches and extra bounce suits his strength square-of-the-wicket, especially on the leg side.

If Khawaja doesn't spend plenty of time out in the middle, the Aussies could be in for a very long summer. That's because the rest of the batting order is looking flimsy.

It contains debutant Marcus Harris, who is untested at the highest level. Also Peter Handscombe, whose technique has never really convinced experts. And not to mention the unreliable Shaun Marsh, who despite having a good summer last year, doesn't inspire much confidence.

For India, Virat Kohli is the undoubted star of the batting order. In his test career, he has amassed more than 6,000 runs to date, at a staggering average of 54.57. But what makes Kohli so good is his ability to play on any surface, in any country, in any format of the game.

His record in Australia is particularly worrying for Aussie fans. Kohli averages 62.00 on Australian pitches in test matches.

His match-winning display in the recent twenty20 game at the SCG suggests that Kohli is ready to come out and fire.

But don't be fooled into thinking that India are a one man team.

They have plenty of batting stock at their disposal, including middle order batter Ajinkya Rahane.

A batsman with a solid technique, Rahane averaged 57 runs per innings in his last and only other tour of Australia. If he replicates that performance, India will be in a very strong position.

Also watch out for the explosive Rohit Sharma, and young gun Prithvi Shaw.

19-year-old Shaw is being touted as the next Sachin Tendulkar. However, after rolling his ankle in a warm-up game, the youngster has been ruled out for the opening test in Adelaide.

Cricket Betting Tip: Virat Kohli to score the most runs in the series @ $2.75

Bowling- Will Starc rediscover his best?

Luckily for the host nation, Australia has the advantage when it comes to the quality of the bowling attack suited to Aussie pitches.

Australian decks are typically known for being hard, fast and bouncy, with little sideways movement for seamers and spin bowlers.

They favour quick bowlers who can bowl consistent line and length, but with a good change-up or "wicket ball".

Australia's pace attack of Mitchell Starc, Josh Hazlewood and Pat Cummins will pose a definite threat to Kohli and Co.

How Starc performs in particular will go a long way towards deciding the series.

A bowler who is deadly when bowling at his peak, Starc's game is in a slump. In his past 6 bowling innings in tests, Starc has only managed a measly 4 wickets.

For a front-lime paceman, this number isn't good enough. Especially considering that unlike Hazlewood and Cummins, Starc lacks the ability to bowl a regular line and length and keep it tight.

You don't mind Starc's average runs per over rate when he is taking regular wickets. But when he isn't, he becomes a liability, leaking runs and releasing pressure.

Furthermore, Starc has struggled in the past against India. His average of 37.38 pales in comparison to his record against all opposition of 28.29.

If Starc's radar is off, you can bet that the likes of Kohli and Rahane will capitalize and send delivery after delivery to the boundary rope.

Thankfully for the Aussies, Hazlewood, Cummins and Nathan Lyon are all high-quality bowlers and ready to pick up the slack if Starc struggles.

India's bowlers meanwhile may struggle to regularly bowl Australia out in this series.

Their two best bowlers are Ravichandran Ashwin and Ravindra Jadeja, who are both off-spinners.

Historically, off-spinners and especially off-spinners from the subcontinent, have struggled on Aussie pitches.

This is backed up in the numbers. While Jadeja hasn't yet played a test match in Australia, Aswhin's strike rate numbers highlight the difficulty overseas spinners face.

His strike rate in all test matches is 53. In Australia, this number leaps up to 97.

India's pace attack will need to be at their best if these two strike spinners can't find a wicket.

Umesh Yadav is in good form, having picked up 10 wickets in his previous test match against the West Indies.

The experience of Ishant Sharma and Mohammed Shami can also be damaging on their day. They will relish their chances against a sub-standard Australian batting line up.

That being said, they lack the pace of Australia's quick men, and won't be as influential this series.

Cricket Betting Tip: Josh Hazlewood to take most wickets in the series @ $8.

Because India have a better batting order, and Australia have the strength in the bowling department, logic says that this will be a close series.

An important factor will be the pitches.

In recent series on Australian soil, curators have dished up one flat track after another. Of course, there is a financial aspect to doing this.

But if the pitches are flat in this series, it's likely that at least a few of the matches will end up as draws.

That's because India's batting order is so good that they'll rarely get bowled out.

Furthermore, the tourists' bowling attack is sub-par, and will likely struggle to take wickets on a flat pitch. Because of this, Australia's batsman could also spend a long time out in the middle.

Therefore, when betting on individual test matches, picking the "draw" will always give you a fair chance of picking up a nice profit.

Reasoning: In a four game series, this means that two games will end in draws, while each team will win one test.

India's batting is just too good to lose the series, while the home ground advantage points to Australia finding a win somewhere as well.

But overall, expect flat tracks and few wickets that will ultimately lead to draws.