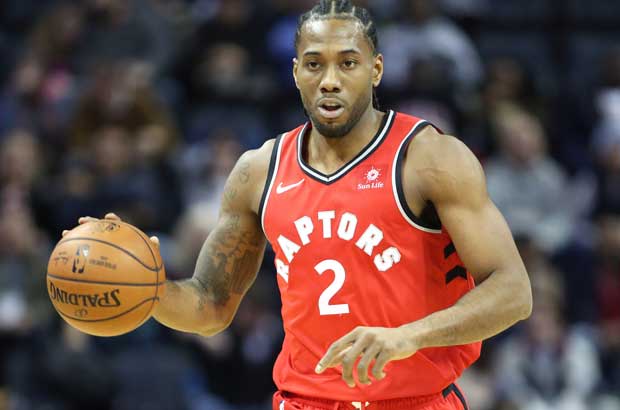 Friday's feast of NBA fixtures is headlined by the top-of-the-table clash between the Raptors and Bucks, which promises to be a nail-biting affair.

Then Brooklyn will look to continue their recent impressive form when they face the Spurs down in Texas.

And our final free NBA pick is available for the Warriors vs Sixers clash, where the Golden State winning streak is expected to extend to twelve.

The most anticipated match of the Eastern Conference so far this season will see the 1st-placed Bucks travel up to Canada to take on the 2nd-placed Raptors.

Part of what makes this match so exciting is that not only will it provide an indication of which team is in the box seat to take out the East, but because either result seems likely.

That's because both teams are playing some inspired basketball.

The Bucks, on the back of Giannis Antetokounmpo's dominant performances, have won seven of their previous eight matches.

The Raptors meanwhile have won ten straight matches at home.

In fact, the last team to beat them on their home court was Milwaukee, who won by 5 points when these teams played on December 10.

Think that gives the Bucks the edge?

Well, these teams have played since then.

It was on January 6, back over the border in Milwaukee. On this occasion, it was Toronto who got the chocolates, winning by 7 points.

This was despite a 43-point, 18-rebound game by MVP contender Antetokounmpo.

Therefore, even if the Greek Freak has another huge performance, the Raptors have shown that the Bucks can still be beaten.

Toronto's star man Kawhi Leonard is in great form himself, having scored at least 30 points in each of his previous four games.

But in the Raptors home loss to the Bucks, Leonard had a comparatively poor night with just 20 points.

As there is such a fine margin between these teams, the result will simply come down to who makes their shots on the night.

The often-hyped stat of true shooting percentage may provide some insight.

However, just take the previous three games and Milwaukee's true shooting percentage dips to 113.2%, while Toronto's jumps up to 114.7%.

While this would have you leaning towards the Raptors if anyone, there is virtually nothing in it.

Reasoning: While it's a coin toss to pick the winner, everything points to this being a close contest.

If you're looking for a potential upset this might be the game.

The Nets travel down to Texas to take on the Spurs in what's sure to be a hotly contested affair.

The side from Brooklyn have won seven of their past eight games, including upset victories over both the Rockets and Celtics.

D'Angelo Russell has been key to this streak, putting up crazy numbers streets ahead of his season averages.

In the Nets' narrow win over the Magic on January 19, Russell had 40 points which included an incredible eight from twelve from beyond the arc.

And that form has been sustained. In Brooklyn's last match against the Bulls, Russell scored 30 points, as well as having 7 assists in what turned out to be a match-winning performance.

This 22-year-old is being touted as one of the future stars of the sport, and giving fans from Brooklyn hope of returning to playoffs as early as this campaign.

Russell and his Nets teammates come up against a Spurs side who have won three on the bounce.

However, they haven't exactly been beating the best, typified by their last game where they needed a buzzer-beater from Rudy Gay to overcome bottom-of-the-table Suns by 2 points.

At their best, the Spurs would be trouncing the Suns by 30 or 40 points. A big factor hindering this kind of margin was the absence of DeMar DeRozan.

DeRozan came to San Antonio from Toronto in the off-season with Kawhi Leonard going the other way.

And you would have to conclude that it's been a good move for both franchises.

DeRozan is averaging 22 points, 6 boards and 6 assists per game with the Spurs, which is close to career-best figures.

Without DeRozan's quality and experience in the backcourt, the Spurs face an uphill battle to keep up with Brooklyn's scoring output.

The Nets average the fifth-highest number of points from threes this season, with 37.2 per game. Spurs meanwhile sit at 22nd with 30.3 per game.

To make up for this deficit, San Antonio will need to score plenty more two-point baskets, and this is an area where DeRozan comes into his own.

Therefore, don't be surprised if the Nets pull off the win here.

Reasoning: With the form Russell is in, he can single-handedly get the Nets over the line.

Two of the NBA's most star-studded teams come together on Friday when the Warriors host the 76ers in California.

The Sixers are fresh off a 16-point victory over a LeBron-less Lakers side, which will have them reasonably confident heading into this one.

But they will know that they will have to be at their absolute best to topple Golden State at home.

After a jittery few weeks in late 2018 when Curry, Green and Cousins were all out, the Warriors once again look invincible.

They have won eleven straight games, with Curry, Thompson and Durant all playing staring roles at various times.

The last five games of this hot-streak have all come on the road, and coincide with Boogie Cousins' return to the side.

It hasn't taken him long to buy into the Warriors philosophy, with the big centre having already made 6 three-pointers from just 11 attempts.

Curry and Thompson are the best three-point shooting double-act in the league, with Durant also not afraid to take shots from beyond the arc.

This is an area where the Sixers are at a sizeable disadvantage.

They prefer to play to the strengths of Embiid and Simmons, which is scoring in the paint.

Over four quarters of basketball, the Warriors have proved time and again that their strategy of going for plenty of threes pays dividends.

Therefore, for the 76ers to win, they will either need to defend the three-ball like champions, or try to keep up with Golden State's three-point shooting.

While Jimmy Butler and Embiid are also capable from deep, Redick's three-point percentage may determine the outcome of this match.

Based on what he's done so far this year, it won't be enough.

Reasoning: Expect a dominant display in their first game back at home after five straight road games.