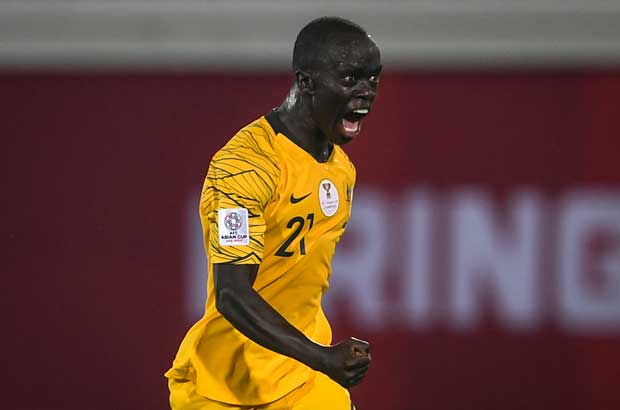 Can Roos bounce into semis?

Australia's Asian Cup defence is somewhat back on the rails after a very shaky start.

While they got the job done on penalties against Uzbekistan in the Round of 16, the Socceroos were far from convincing.

They will need to be at their best in what's expected to be a tough encounter against the host nation, UAE.

Graham Arnold has flagged a potential formation change, after Australia were dealt a blow following the suspension of Tom Rogic. He picked up his second yellow card of the tournament against the Uzbeks.

Without Socceroos mainstay Aaron Mooy, who is absent through injury, Arnold will be hard-pressed to come up with a formula to get the job done.

A big boost is Matthew Leckie's return from a torn hamstring. Leckie came on as a sub against Uzbekistan, looking dangerous from the off, before netting the winning penalty in the shootout.

Mat Ryan was superb in front of goal. The Brighton and Hove Albion goalie will need to have another fine performance to repel the Emiratis here.

Besides these familiar Socceroo faces, Arnold has put his own stamp on the team with Chris Ikonimedes and Awer Mabil playing significant roles in attack.

Mabil has shown glimpses of what he is capable of, highlighted by a stunning goal against Syria in the Group Stage.

Despite goals like this, Arnold's attack is lacking fluency.

This was evident against Uzbekistan, where the Socceroos never really looked like scoring.

Unless something changes, they will struggle to find the back of the net again.

Especially as they come up against a team coached by Alberto Zaccheroni, who is built in the typical Italian managerial mould.

In other words, having a solid defence is his first priority.

Zaccheroni has an excellent CV as a manager, having taken Japan to Asian Cup glory in 2011, as well as having managed Serie A giants Juventus, Lazio and both Milan clubs.

However like Arnold, Zaccheroni has done it hard in his current role, winning just 29% of matches since he took charge in 2017.

In this tournament, UAE were pushed to extra time by Kyrgyzstan in the Round of 16, where they found the winner in the 103rd minute.

Worringly for Zaccheroni, UAE conceded 2 goals in this game, making it 4 goals conceded in the tournament.

But the biggest obstacle for Zaccheroni in taking UAE all the way is that their star man Omar Abdulrahman has missed the whole Asian Cup with a knee injury.

The "Emirati Messi" has long been at the heart of UAE's attack. However, in a good sign for the home nation, they have scored at least one goal in all four games so far.

Socceroo defenders will need to be on top of their game to repel their opponents here.

In Omar Abdulrahman's absence, Ali Mabkhout has been UAE's main man in attack.

Mabkhout has had a direct hand in 4 of the host nation's 7 goals this tournament.

A talented striker, Mabkhout has scored almost 50 goals for his home nation, from just 73 caps. To put that into perspective, Tim Cahill had exactly 50 goals for Australia, from 108 international caps.

Mabkhout holds the key for the Emiratis. Trent Sainsbury's main assignment will be curbing his influence.

Of the 3 games Sainsbury has played this tournament, the Socceroos have only conceded 1 goal. In fact, with Sainsbury on the park, Australia have gone more than 280 minutes without conceding a goal.

This stat bodes well for Australia's chances of keeping another clean sheet here, especially with Mat Ryan in great form.

Reasoning: Australia's defence has held up of late, while they have struggled in the goals department against quality opposition.

With the home support behind them, UAE will be very hard to break down.