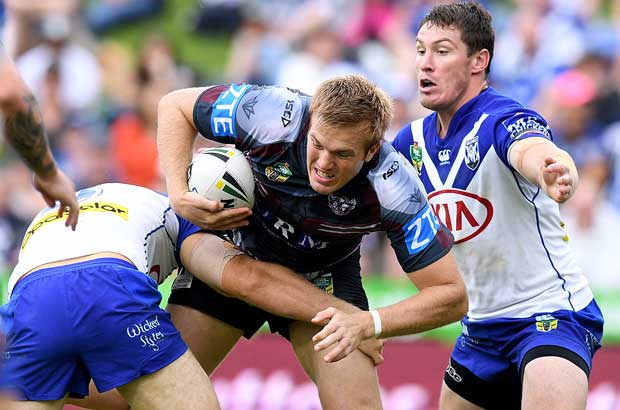 Canterbury up against old Dog

Saturday's NRL schedule kicks-off down in Wagga Wagga, where the Raiders will welcome a struggling Penrith side.

Then we're out to Brookvale where the Dogs will be hoping to record back-to-back wins against familiar foe Des Hasler.

The day's action concludes at the Sydney Cricket Ground, where the Tigers will look to spring an upset on the Roosters.

Find out which way we're leaning with out NRL betting tips below.

We're out at Wagga Wagga for this clash, where Penrith will be hoping a change of scenery will help spark them to life.

There were definite signs of improvement in last week's four-point loss to Souths, in particular their ability to dominate possession and field position.

The Raiders know they'll be up for a fight and will be wary of an Ivan Cleary side desperate to get their season on track.

Although, a four-point loss of their own to Manly in Round 7 just might have halted their momentum.

Canberra have easily been the better team this campaign and if they bring their best here, they'll be winning by a margin.

Their defence which has been so good in 2019 let them down against the Sea Eagles, with a whopping 51 missed tackles.

To put that into perspective, the Raiders had only missed a combined 50 tackles in their previous 2 games, against the Broncos and Eels.

Defence would've been on Ricky Stuart's agenda in midweek training, so expect them to improve.

Why Panthers can win

Penrith had everything go for them against Souths, with 57% of the possession and a mountain of attacking opportunity in the Rabbitohs' red zone.

But their attack still looks clunky, with James Maloney and Nathan Cleary still a long way off the performances we know they're capable of.

In saying that, Origin coach Brad Fitler declared it was the best the incumbent halves played together in 2019, which is a positive sign heading in here.

And with Villiami Kikau back to his destructive best with tries like this, Canberra's defence will need to be switched on.

Des Hasler welcomes his former club out to Brookie on Saturday night, in what is a fascinating betting match.

While Des will have plenty of headaches now that DCE has joined Turbo Tom on the sidelines, he couldn't be happier with the performances his side continue to dish up.

Meanwhile Dean Pay will be happy with the Dogs' efforts since their humiliating loss to the Dragons in Round 5, with a well earned two competition points last week against the Cowboys.

They'll need to build on that to record back-to-back wins here.

Why Sea Eagles can win

Now without their two main attacking weapons, it remains to be seen if Manly's attack can continue scoring tries for fun.

They've crossed for the fourth-most tries in 2019, a stat unusual for a Des Hasler side.

Kane Elgey comes into the team to partner Lachlan Croker in the halves. And with over 50 games of NRL experience, Elgey has all the quality to help Manly keep the ball rolling.

With a great forward pack that have been inspirational this campaign, Elgey and Croker just need to do the basics right and the home side will come out on top.

The Dogs continue to put in for their coach and based on what we've seen in the past month, it doesn't look like that's about to change.

Corey Harawira-Naera is one who has really flourished at his new club. The ex-Panther made a game high 43 tackles, ran for 149 metres, and scored two valuable tries in last week's win.

And with big Ofakiki Ogden also impressing in recent weeks, the Dogs just about have enough strength in the forwards to contain Manly's pack.

Point-scoring has been their problem in 2019. And against a Des Hasler defence, they'll need to show something more.

It looks likely that Kieran Foran will make the run-on side after overcoming an ankle injury, whilst Dylan Napa is an outside chance of also returning. If these two take the field, expect the Dogs to give this a real crack.

Reasoning: At Brookvale and with Des desperate to get one up over his old club, they should have enough to scrape over the line. However, punters should wait until news on the return of Foran and Napa is confirmed.

Saturday's action is rounded out at the SCG, where the red-hot Roosters will be looking to maintain their lead at the top of the ladder.

They start as heavy favourites in the NRL odds, and based on what we've seen from them so far, it's not hard to see why.

However, the Tigers aren't without a chance.

They'll be full of confidence after piling on 30 unanswered points last week and also welcome Benji Marshall back from injury.

Why Roosters can win

Just as the Tigers welcome back their main five-eighth, so do the Roosters, with Luke Keary named to return after missing a week with concussion.

Once again, the Tri-colours were great in patches in that game, where they outmuscled the Dragons 20-10.

It's scary to think how good Trent Robinson's men could be if they put in a full 80-minute performance.

However, after winning 6 straight, there's a danger the Chooks could become complacent in a match where they will start as heavy favourites.

If they underestimate the Tigers, then an upset is on the cards.

Wests responded in style after their 45-point thumping, dishing out some pain of their own against Gold Coast.

Mahe Fonua was massive on the wing, running for 178 metres and scoring a hat-trick of tries.

Fonua, along with fellow outside backs Esan Masters and Robert Jennings have all the power to contain even thr Roosters' superb backs.

But it's their hard-running and underrated pack that they'll turn to to give them the advantage here.

The Tigers are ranked 3rd in post-contact metres in 2019, and could definitely trouble the home side with another hard-running display.

Reasoning: The Roosters are due for a slip up, while Wests have the hard-running game style to trouble them.

2018 media tipster champ: Roosters
Check out all the best betting promotions on offer for this weekend's games.