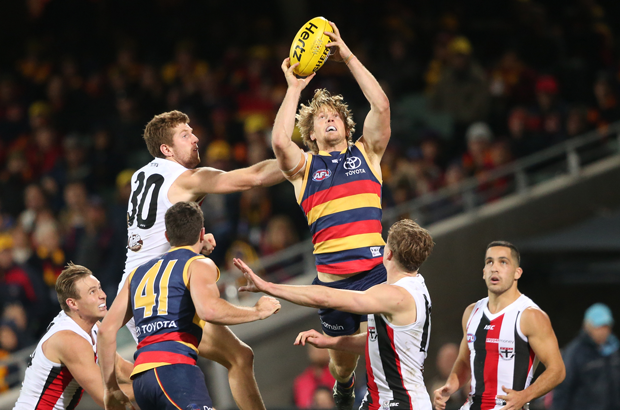 Out for Grand Final redemption

With the recruitment of midfield star Bryce Gibbs in the off-season, the Crows have made their intentions crystal clear. Gibbs is not a player who will develop into a Crows mainstay, but rather a player at the peak of his game brought in specifically to help the Crows win the flag this year. This was made further evident in the decision to allow quality youngsters Jake Lever and Charlie Cameron to depart the club, and seek their fortunes elsewhere. The Crows aren't planning for the future, they're throwing everything at the stumps.

This is perhaps a result of being so thoroughly outplayed in last year's Grand Final, in a game where they were heavy favourites to win. This favouritism was unsurprising given the season that Adelaide had. The Crows' attack was on fire throughout the competition and it showed in the stats, ranking first by a mile in both goals kicked (15.8) and goal assists (10.8) per game.

We don't really think of Adelaide as a hard-nosed team, but this perception was belied in the numbers, in which the Crows remarkably ranked first in contested possessions per game (154.7), and third in tackles per game (71.8). This demonstrates that Adelaide are much more than a counterattacking team who can move the ball from deep defence to the goal mouth in the blink of an eye. They can also smash-up opposing teams in the middle of the park.

All the signs are looking good for the Crows to go one better this year. It will come down to how well they perform in the big moments, and last year's failed final will provide invaluable experience for this year's tilt at the flag.

Player to watch: Riley Knight has been held back by injury in the early stages of his career. However, a really solid group of performances in 2017 saw him average 5 score involvements, and 4 marks and tackles per game. If he can stay on the park, he is primed for a good year.

Key player: Leading the league with 186 tackles, Rory Sloane had a massive 2017, establishing himself as the Crows' most important player. Able to perform in every department, Sloane is one of the competition's most complete players. He's capable of winning the ball in the scrap, outfoxing match-ups in one-on-ones, and sprinting forward to bolster Adelaide's already fearsome attack.

While Jake Lever is a big loss, Adelaide's defence is more than capable of holding up against any attack. Rory Laird and Kyle Hartigan are consistent and reliable performers, while Daniel Talia is the star of the Crows' backline. A spoil-king who does all the one-percenters that don't show up on the stats sheet, Talia often has the league's best full-forwards feeling like they're wearing a straightjacket.

The fact that Tom Lynch, Josh Jenkins, Taylor Walker and Eddie Betts each kicked at least 30 goals last season is nothing short of remarkable. The great success of Adelaide's attack is their ability to share the ball around and continually assist each other for better looks at goal. Captain Tex Walker led the league in goal assists (33) whilst still booting 54 goals. Eddie Betts, who seems to get better each year, had 29 assists and top scored with 55 goals. Defenders beware.

Serial accumulator Matt Crouch will be up to his usual tricks again this year, aiming to replicate his league high 825 disposals from 2017. His brother Brad, Rory Sloane and Bryce Gibbs make for an intimidating foursome in the centre square. They'll feed off big Sam 'Sauce' Jacobs, who led the league in hitouts last year (996).