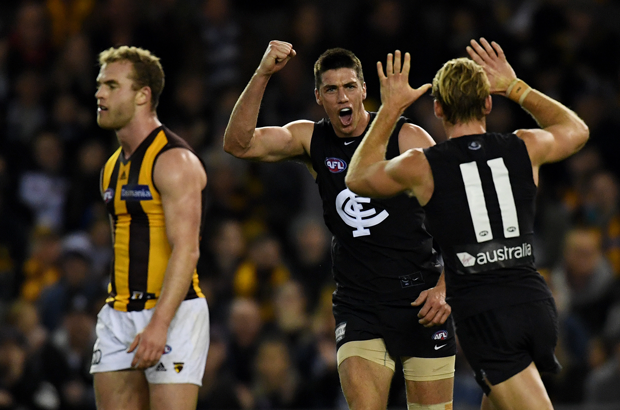 In the past five years, Carlton have been quietly amassing some of the best young talent in the league as the club's coaching staff have their sights firmly set on challenging for the flag in three or four seasons' time. This development phase hasn't been without its struggles, with the Blues finishing 16th, 14th and 18th in the last three seasons respectively.

Last year in particular was a tough pill to swallow for Carlton fans, with their beloved Blues ranking last in the league for points scored (1597), as well as accumulating the fewest disposals of any club (7913). The Blues did fare better in other statistics, notably in marking where they were ranked 3rd in marks per game at 104.

Highly-rated young coach Brendon Bolton, who learnt his trade at Hawthorn, will be looking to imbue his players with the winning mentality so identifiable with the Hawks. He will need to get more out of his group across the board and especially improve their scoring output.

A squad with incredible potential, it is only a matter of time until Carlton fans will be cheering again. In fact, last season started somewhat brightly for the Blues after they won 5 of their first 12 games before injuries to key players, including midfield gun Patrick Cripps, blighted the tail end of their season. Carlton limped home to win only one of their last 10 games.

The Blues will be looking to capitalise on their relatively easy draw this season, which sees them only having to face GWS, Geelong and the Swans once, positioning the club ideally to commence their ascent up the ladder.

Player to watch: In a team chock-full of young talent, any number of players could fill this spot. But in particular, the number one draft pick from 2015, Jacob Weitering, is one to look out for. Tall, skillful and capable of playing anywhere on the pitch, the defender is set for a breakout year.

Key player: While still only 22, Patrick Cripps will be the player who the Blues look to for success in 2018. A standout performer before fracturing his fibula last season, Cripps is a midfielder who can do it all and is central to Carlton's progress this year and in seasons ahead.

Alongside Weitering, Liam Jones and Sam Docherty are talented players who can control the game from the back. Docherty in particular had a superb 2017, averaging 9 marks per game in a league high performance. These three are capable of stopping most rival clubs' attacks.

With enormous potential, 21-year-old Charlie Curnow and 20-year-old Jack Silvagni (son of Carlton great Stephen Silvagni) will be expecting to better their combined goal tally of 39 from last season. If big boy Levi Casboult can find his kicking boots, the Blues will be banging in the goals.

Despite losing the class of Bryce Gibbs to the Crows, captain Marc Murphy will be looking to lead his youthful midfield brigade. Cripps, as well as live-wire Sam Petrevski-Seton, and new recruit Matt Kennedy will be looking to combine in the middle of the park with aplomb.