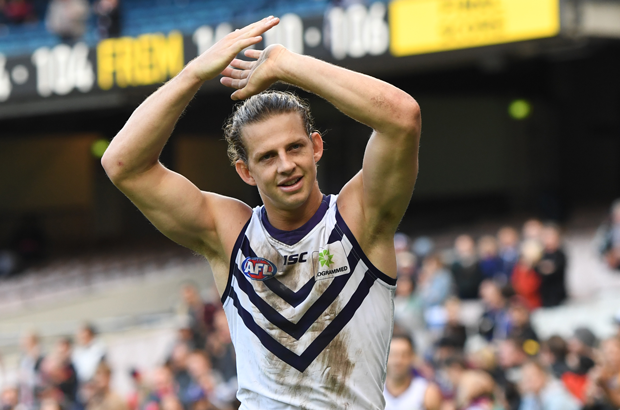 Fremantle enjoyed great success without winning the flag between 2013-2015, finishing in the top 4 each year and nabbing the minor premiership in 2015. However, the past two years for the Dockers have been anything but cheery, ending up 16th in 2016, before a slight improvement saw them round out the season in 14th place last year.

Much of this decline can be attributed to Nat Fyfe, who was stellar in 2015, winning the Brownlow Medal, before an untimely leg fracture saw him miss the entire 2016 season, completely halting Fremantle's progress. While having a solid 2017, Fyfe will be looking to emulate the level he reached in 2015, as well as inspiring better performances from his teammates as their recently-appointed captain.

Despite scoring the fewest goals in 2017 (231), and notching up the second worst contested possessions per game (133.4), Fremantle ranked 6th in disposal efficiency at 73.6%. This suggests that if Fremantle can win more of the ball this year, they have the quality on the park to use it effectively, which should result in an upward surge in goals kicked.

Like their West Coast neighbours, Freo will be moving into Perth Stadium this year. However, with a younger squad and core group of players, expect the Dockers to adapt quickly to the change of surroundings as they look to turn the new stadium into a fortress. This will be essential if the Dockers are any chance of making it into the finals.

Player to watch: Lachie Neale has been quietly improving his game each year and last season was his best so far, ranking first in disposals (572), but also second in tackles (94), score involvements (123) and contested possessions (273) for the Dockers. Coach Ross Lyon will be hoping that Neale can take his game up another gear this season, which would rank him amongst the best midfielders in the league.

Key Player: There is no going past Nat Fyfe, who really holds the key to Fremantle's success this season and for years to come. After signing a club-record deal keeping him in Perth until 2023, Fyfe will be eager to repay the Dockers' faithful with a string of outstanding performances.

Steady hands Bradley Hill and Michael Johnson will be looking to up-and-comer Joel Hamling to help forge a reliable defence this season. They will be bolstered by the dynamic game and booming boot of Nathan Wilson, who is a fantastic acquisition from the Giants.

Part of the reason why Fremantle only managed 231 goals last season was that key forwards Cam McCarthy and Shane Kersten were playing their first seasons for the Dockers. Having had a year to settle in and get accustomed to Ross Lyon's style, expect McCarthy and Kersten to improve on their collective total of 49 goals. If Matt Taberner can convert his potential into goals, Freo's attack will be feared by opposition teams.

Club veteran David Mundy, alongside genuine stars Fyfe and Neale will be striving to establish one of the best midfield trios in the league. These three will be the foundation upon which everything else happens for the Dockers, and consequently crucial if they are to make the finals.