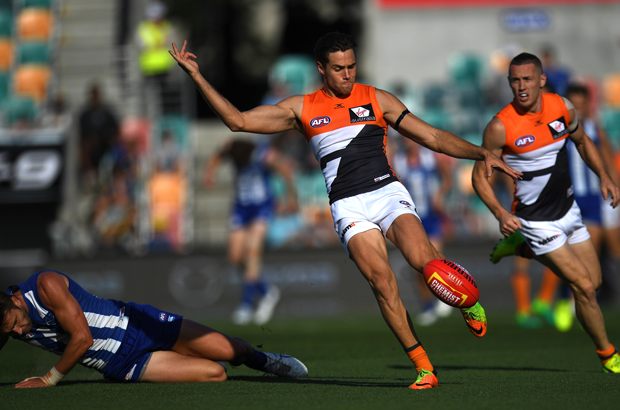 The beginning of the orange dynasty

Since entering the competition in 2012, the Giants have been scorned at and generally whinged about by the Melbourne-centric AFL scene.

''Why do they get all the top draft picks?"

"They're a fake club" and

"They're nothing more than a failed cash-grab by the AFL"

...have all been heard from the latte-sippers around the terraces of the MCG. While there is some substance to these aspersions, it reveals one key fact. Melbourne, and the rest of the competition for that matter, are terrified of the Giants.

GWS have the talent in their squad to win the flag for the next five consecutive years. The challenge for coach Leon Cameron is to bring all of this talent together, and use the 4th-placed finish of the last two years, as a springboard rather than a slippery-dip.

The sheer skill of the Giants' players is revealed by their disposal efficiency in 2017 (74.6%), which ranked 2nd in the league. However, the Giants are just as good at the hard stuff as they are at the pretty plays, ranking 1st in clearances from stoppages (42.2) and 4th in tackles (70.6) per game. GWS's domination from stoppages indicates that their young midfield are as good as anyone's in the league.

And with genuine stars up front like big full-forward Jonathon Patton and the divisive but brilliant Toby Greene, the Giants will be looking to rack up the points this year. Despite signing no new players, the challenge for the Giants was to hold on to the talent that they already had, namely Josh Kelly, which they've managed to do successfully.

Player to watch: Young gun Jacob Hopper is just one of the many talented Giants midfielders, and would be a prized possession for any club in the league. Despite being sidelined for much of 2017 through injury, Hopper still managed 17 disposals and 6 tackles per game. With a full season on the cards, Hopper will emerge as one of the comp's best young midfielders.

Key Player: Josh Kelly is the perfect blend of toughness and elegance, and starred in 2017, ranking first for GWS in tackles (156), score involvements (122) and inside 50s (121), not to mention kicking a handy 19 goals. Healthy competition in the midfield will only spur him on to greater heights.

In the Giants' backline you have a bit of everything. Aiden Corr and Phil Davis who strangle the big forwards of opposing teams, Nick Haynes who flies through the air and pulls down big contested marks, and Zac Williams who receives the ball and runs it out from half-back, making would-be tacklers look like they're standing still. This motley collection is marshalled by footy-savvy veteran Heath Shaw, who is looking to end his playing career on a high.

The tremendous trio of Jeremy Cameron, Johnathon Patton and Toby Greene kicked 45 goals apiece in 2017. If any of them were on their own, they'd challenge for the Coleman medal. But this triple-pronged attack is only enhanced by its synergy, and with a group of mids that will contribute to the goals tally, the Giants are a fearsome prospect for opposing defences.

To say that GWS have an embarrassment of riches in the centre of the park is a gross understatement. Partnering Kelly and Hopper are the dynamic Dylan Shiel, the grit of co-captain Callan Ward, the style and tackling pressure of Stephen Coniglio, and the marathon-like running capacity of Tom Scully and Lachie Whitfield. Having had several years playing together and learning each other's games, this midfield is ready to set a new standard of excellence in the competition.