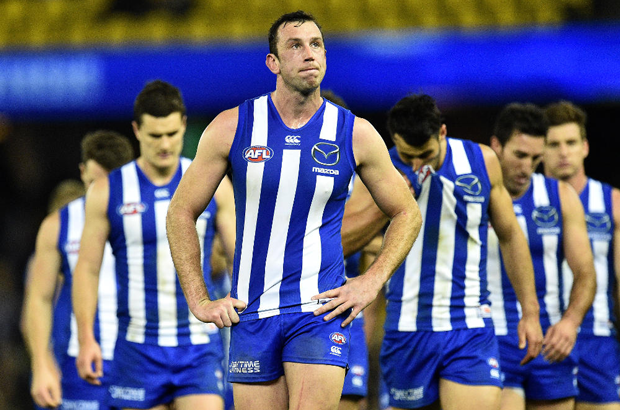 Before last year's disappointing but unsurprising finish of 15th, the Kangaroos had made the finals for three consecutive seasons. Last year’s slump came after losing a number of key players to rival clubs as well as multiple retirements, and there is nothing to suggest that North Melbourne will make a better fist of it this season.

After failing to recruit gun midfield targets Dustin Martin and Josh Kelly, the Kangaroos seemingly gave up on luring anyone to the club, having signed no fresh blood for the upcoming season. Worryingly for Kangaroos fans, there will be a noticeable hole in the middle of the park this season after the club de-listed stalwart Sam Gibson at the end of last season. Gibson, who holds the competition's longest active streak of games at 130, was a casualty of North Melbourne's aggressive rebuilding strategy.

Full-forward and cult hero Ben Brown will be crucial to the Roos success this year. He was a dominant force last season, booting 63 goals and spearheading the Roos’ attack. Still only 25 years old, the time has come for Brown to establish himself as one of the league's best forwards.

The stats were telling when it came to the Roos poor season last year. They were ranked last in both kicks (192.4) and marks (83.1) per game. Coach Brad Scott will be determined to right these wrongs this season, particularly given the fact that North Melbourne are renowned as a team of tall timber, adept at out-marking all comers. Forwards Ben Brown and Jarrod Waite, as well as talented ruckmen Todd Goldstein and Majak Daw, measure upwards of 193 cm. If the Kangas are to have any success in 2018, it surely must come off the broad backs of their bean poles.

Player to watch: Jy Simpkin made his debut last year, kicking 9 goals from 13 games in a promising start to his AFL career. Quick and elusive, he is able to scrap off the crumbs in the forward 50 to give his team a boost in the goal-scoring department.

Key player: Todd Goldstein is widely considered the best ruckman in the AFL. With an all-round game that is not just limited to hit-outs, Goldstein will be a key player going forward. He ranked 6th among his teammates for score involvements in 2017 and will need to up his stats in all departments if the Roos have any hope of returning to finals footy.

It's a big year for Robbie Tarrant and Shaun Atley. Capable of not only stopping attacks but launching counterattacks, they will play a vital role in aiding the Kangaroos in offense whilst fulfilling their defensive duties.

If the seasoned Jarrod Waite and Shaun Higgins can kick half the goals as Ben Brown did last season, they will stand the team in good stead. When the Roos get it right, they are near unstoppable in attack, demonstrated in Round 7 last year when they kicked an incredible 10 first-quarter goals against the eventual minor premiers Adelaide.

North Melbourne's weak link is their midfield. Despite brimming with toughness and effort, the likes of Jack Zeibell and Ben Cunnington simply lack the talent of their rival midfielders and don't have what it takes to be a destructive force in the competition. Missing the signings of Martin and Kelly will undoubtedly come back to bite the Kangaroos.