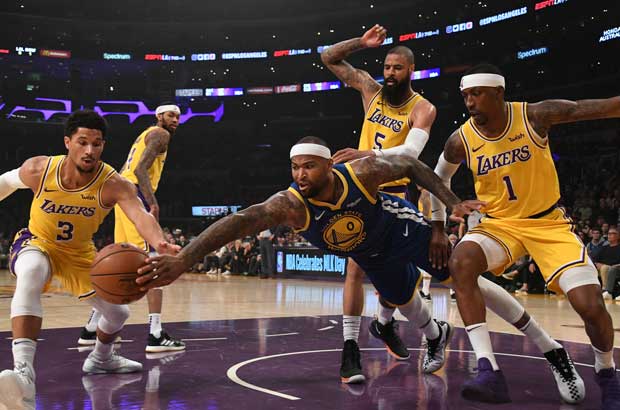 The Pelicans will look to stay in touch with the playoff spots when they make the tough trip to Oklahoma City.

The Wizards will welcome the Warriors to town, with the visitors looking ominous now that DeMarcus "Boogie" Cousins has made his long-awaited return from injury.

And finally, the Minnesota Timberwolves and LA Lakers do battle in a clash that will prove crucial once the playoff spots have been finalised.

Sitting in 12th spot on the Western Conference ladder, New Orleans need to get a wriggle on if they want to finish in the top 8 and contest the playoffs.

Unfortunately for them, star man and fan favourite Anthony Davis recently sustained a finger injury that will keep him out for two weeks.

Indeed, if the Pelicans were higher up on the ladder, AD would be a shoo-in to claim this year's MVP award.

Not surprisingly, losing him is a huge blow.

Nevertheless, at the time of writing, the Pelicans had played one game in Davis's absence, where they routed the Grizzlies by 20 points.

Stand-in centre Jahlil Okafor had his best game all season with 20 points and 10 boards, filling some of the void left by Davis.

However, this tricky road trip is the second leg of a tough back-to-back, that sees the Pels first face the Pistons on Thursday.

Fatigue will definitely become an issue late on, especially with AD missing.

Look to an in-form Paul George to capitalise for the home team.

OKC have turned around a new-year slump with three successive wins.

Last time out they recorded a 9-point home win over the Trail Blazers, with George racking up 36 points in a stellar performance.

After a quiet start to the 2018/19 NBA season, George has been in career-best form, propelling the Thunder up to 3rd spot on the Western table.

And while Russell Westbrook has been having shooting troubles, he continues to fill the stat sheet just about every time he steps on court.

Against the Blazers, he had his 14th triple-double of the campaign after recording 10 rebounds, 14 assists and 29 points.

One thing the Pels will need to be wary of is the Thunder's ability to pinch the ball. OKC lead the league with 10.4 steals per game.

If Oklahoma City get more possessions through these steals, their superior quality on the floor will put the Pelicans to the sword.

Reasoning: The Thunder have too much firepower against a team missing their star man.

Not only will they have to contend with a full-strength Golden State line-up, but they will have to do it without two of their best, John Wall and Dwight Howard, who will miss with injury.

Despite missing these big names, the Wizards have been impressive of late, especially at home.

They have triumphed in 4 of their last 5, with the other game being a loss to the title-contending Toronto Raptors in double overtime.

This form reads well for the Wizards, who are at least in with a shot of sending the Warriors packing.

The key man for the home team will be Bradley Beal.

Beal is a talented guard who is averaging 25 points, 5 boards and 5 assists per game this season. He has had to play a bigger role with Wall out, and has stepped up to the task.

The experienced Trevor Ariza and skilful forward Otto Porter Jr., will need to perform at their best to help Beal and the Wizards pull a rabbit out of the hat here.

It's going to be a tough ask against an all-conquering Warriors team who welcome DeMarcus Cousins into the side.

Cousins was an off-season recruit from New Orleans, but had yet to start a game because of an achilles injury.

But "Boogie" has now had two run-outs with his new team-mates, inspiring them to two 15+ point victories, both away from home.

Cousins' good energy has washed off on his teammates, who have stepped up their games.

Klay Thompson's had arguably the best performance of his career against the Lakers last time out.

He scored 44 points from just 27 minutes of play, thanks to a flawless display of shooting.

Thompson scored 10 of his 11 three-point attempts, proving that when he is hot, there is no better shooter of the basketball in the league.

With both Kevin Durant and Steph Curry due for a big game, expect the Warriors to make it 3 from 3 with Cousins in the line-up.

Reasoning: No matter how well the Wizards are playing at home, the three-point shooting of Golden State is something else.

There is too much quality on the court for the visitors not to win comfortably.

Friday's set of fixtures concludes with what's expected to be a fiercely contested game between two sides hot on the tails of the Western Conference top 8.

The Lakers have a slightly better record coming in with 25 wins opposed to Minnesota's 23.

However, the home team are once again expected to be without LeBron James, as he waits to make his return from a groin strain.

The Lakers have been okay in LeBron's absence, just doing enough to stay in touch with the top 8.

Kyle Kuzma has stood up as the dominant scorer, while young centre Ivica Zubac has shown a maturity beyond his years.

The Timberwolves meanwhile have struggled on the road this campaign, only winning 7 of their 16 road fixtures.

This was a major factor behind the sacking of head coach Tom Thibodeau in early January.

Since then the T-Wolves are 2 from 3 on the road, including an impressive victory against OKC.

To the joy of most fans of the NBA, Derrick Rose has been playing somewhere near his best for Minnesota this season.

The class of the veteran guard and former MVP was on display against the Suns on January 21, where he shot the winning basket with less than a second on the clock.

Karl-Anthony Towns and Andrew Wiggins are both major weapons for the visitors.

These two can be destructive on their day, but need to find consistency in Minnesota's push to make the playoffs.

In an era where possessions are becoming extra important, the Lakers face a disadvantage in the amount of times they turn the ball over.

They average the 27th worst amount of turnovers per game at 15.8, while the T-Wolves are doing significantly better, committing the 3rd fewest turnovers in the league.

This suggests that Minnesota will dominate possession. Coming off a morale boosting 27-point victory over the Suns last time out, expect the T-Wolves to play with confidence and prove too good.

Reasoning: The T-Wolves are starting to get the results on the road. Against a LeBron-less Lakers, expect another here.