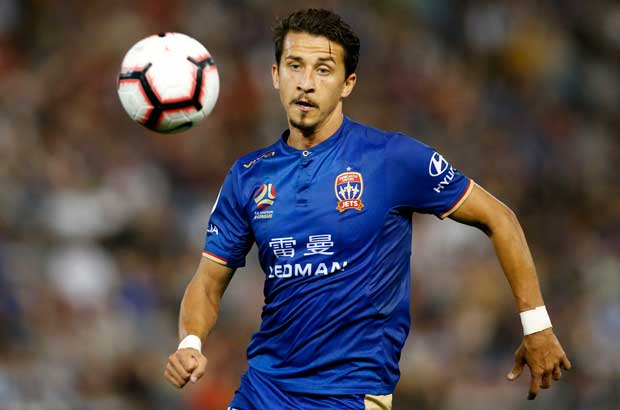 Jets set for a crash in Grand Final rematch

Match week 21 of the A-League is split over two weekends, with just three matches taking place in the coming days.

That allows the A-League punter to put extra focus into each bet, where he can be aided by our A-League betting tips.

The highlight game of the round sees Newcastle looking to continue a four-game undefeated streak when they play their Grand Final nemesis, Melbourne Victory.

The Sky Blues host the Reds, and Perth Glory travel to City in the weekend's other two fixtures.

The Sky Blues will look to keep the pressure on Perth Glory when they host the Reds on Friday night.

Sydney FC are sitting in second spot on the ladder, eight points in arrears of Glory.

A slight slip-up from Perth last week opens the door ever so slightly for Sydney to come through a steal the premiership.

After shock results to both Brisbane and Central Coast, the Sky Blues got back on track in match week 20 with a 1-0 win over Wellington.

Adam Le Fondre scored the game's solitary goal from the penalty spot, extending his lead in the race for the Golden Boot.

Le Fondre would have to be right up their as one of the buys of the season.

The Englishman's class in front of goal has been a pleasure to watch, and it's this quality that will cause Adelaide trouble here.

He is likely to start alongside Iranian import Reza Ghoochannejhad, who is still waiting for his first goal in the A-League after joining the Sky Blues in late January.

"Gucci" has plenty of experience for both his national team and in club football around the globe.

It is only a matter of time before he finds the back of the net.

Adelaide come into this match after drawing 0-0 with the Jets up in Newcastle.

This result marked Adelaide's third consecutive away draw in the A-League, after a 1-1 result against Melbourne City and another 0-0 draw with Perth.

It seems that Reds' coach Marco Kurz prefers to focus on defence when playing away from home.

In fact, the Reds have conceded a joint league-low 8 goals when playing away from home this campaign.

While Sydney have class and experience in the final third, they haven't been belting in the goals in 2018/19.

Expect this to be another tight, low-scoring affair.

Reasoning: Defence will be the first priority for both managers here.

Last week's Melbourne Derby was a let-down after the big things expected of it.

The game finished 1-1, but Victory can count themselves lucky to escape with anything.

That's because centre-back Georg Niedermeier was red-carded after just sixteen minutes, in conceding a penalty that City converted to go ahead.

Kosta Barbarouses then found the back of the net with a shot that should have been saved.

This was also the only shot at goal Victory registered for the entire game.

If Victory can come back with only ten men, a full compliment of players will stand them in good stead for this clash.

Another factor in Melbourne's favour is Ola Toivonen.

In his return from injury, the marquee striker came off the bench in the second half last week.

But with ten men, Toivonen was given no service, and rarely saw the ball come his way.

Expect him to start for this clash. Considering he has scored 10 goals from just 11 appearances this campaign, the Jets defenders will need to be on their toes.

This is especially the case as Newcastle are in with a genuine shot of making finals football.

After 6th-placed Wellington's defeat, the Jets are just five points behind them on the ladder.

A couple of wins and Newcastle will be back inside the top six.

The Jets are playing like they believe. From their previous four games, they have recorded two wins and two draws.

Last time out against Adelaide, they probably deserved a win, but just couldn't capitalize on the chances they created.

While they are playing good football, and are undefeated from their last four, the Jets will need to be at their very best to get something out of this clash.

That's because the away trip to Victory is one of the hardest in the league.

And after a disappointing derby draw, Melbourne will come out hungry here.

Reasoning: Like they did in last year's grand final, Victory have too much quality and should get the win.

Not just Ola Toivonen, but Keisuke Honda and others have too much class for the Novacastrians to contain over 90 minutes.

This weekend's third and final game sees Tony Popovic's Perth attempt to maintain a strangle hold on the top of the ladder.

They face Melbourne City, whose head coach Warren Joyce is under fire for repeated underwhelming performances.

The drama surrounding Joyce started when he fell out of favour with star striker and fan favourite Bruno Fornaroli.

Fornaroli was exiled from the team, as Joyce opted for a youth-focused approach.

The Uruguayan was finally able to secure a transfer away from the club, and has made the switch to join, of all places, Perth Glory.

While the deal hasn't been finalised and Fornaroli isn't expected to be lining up for Perth anytime soon, this is a small mental win for Perth even before a ball has been kicked.

Joyce has also been recently criticised for not playing in an attacking enough style.

Last week was a perfect example. Against 10 men and leading 1-0 in the derby, City continued to knock the ball around without going for Victory's throat.

This costed them in the end, as they only ended up with a draw.

Another team who will feel aggrieved that they only ended up with a point is Perth.

Glory led for most of the game in Western Sydney, before a 95th minute Tarek Elrich strike saw the Wanderers salvage an unlikely point.

While this wasn't the best way to end a game, Popovic will no doubt use it as motivation for this clash.

He will be revving up his team as they aim to be one of the few A-League sides to surpass the 60 point mark.

That effort starts with a win here.

Reasoning: City haven't shown nearly enough in recent performances to be a match for Perth.