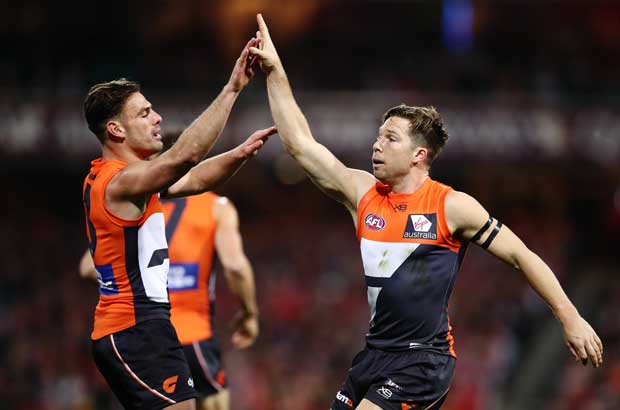 There are four cracking matches for AFL punters to get their teeth stuck into on Saturday, highlighted by two derbies.

First up is the QLD Derby, where Brisbane and Gold Coast will butt heads.

After the Saints look to continue their impressive start to the season against Adelaide, the Sydney teams lock horns in what's expected to be a hotly contested match.

And then the Dockers and Dogs will round things out in Perth.

Find out our AFL betting tips for all four Saturday games below.

The round of rivalry games continues on Saturday when the Suns host the Lions in the Q Derby.

Both Queensland sides have enjoyed a better-than-expected start to the 2019, with the winner of this match set to keep their momentum rolling.

However, with both teams coming into this clash after a comprehensive defeat, both will be desperate to avoid another loss here.

Gold Coast have shown in 2019 that you don't need a list jam-packed with star names, but rather the right attitude to win games.

With the league's most maligned squad, the Suns have scrapped their way to three wins from five games, after a series of dogged and determined performances.

Touk Miller and Brayden Fiorini have stood up in the middle of the park, and both were impressive yet again last week.

Despite going down by a whopping 73 points, these two combined for 58 touches, and really tried their guts out in the middle.

If they can get more of their teammates to come with them here, then don't put another upset beyond the Suns.

Brisbane have not just the better side on paper, but have claimed bigger scalps with their three 2019 victories.

These came in the opening 3 rounds, before the Brisbane outfit were soundly beaten by both the Bombers and Magpies.

It's no disgrace to lose to these star-studded sides, with the Lions sure to appreciate coming up against a side of lesser quality.

However, derby matches are a different beast altogether.

If Brisbane come in expecting to win, then they'll get their backsides handed to them.

Reasoning: This is superb value for a fixture where both teams are generally up for the fight.

Remarkably, after the first 5 rounds of AFL footy, the Saints sit in second spot on the ladder.

A win here would see them climb to the summit, which will be more than enough motivation for Alan Richardson's men.

The Crows meanwhile are also flying high after a 73-point win.

With the better side on paper, there's no reason why they can't do that again.

Even though many remain unconvinced that the Saints are the real deal, there's no question that their latest win was their best.

They hammered the Dees by 40 points last week, with their often criticized forward line of Tim Membrey, Dean Kent and Josh Bruce combining for 9 goals.

But it's been St Kilda's defence that has won them matches.

They have conceded the second fewest points league-wide with 344.

However, this rock-solid backline takes a hit, with Saints' skipper and half-back flanker Jarryn Geary ruled out for a few weeks after undergoing thigh surgery.

The most pleasing aspect of Adelaide's monster win was the return to form of two of their biggest forward weapons, Taylor Walker and Eddie Betts.

Walker kicked 3 goals and had 2 goal assists, in welcome performance in the forward line.

But it was Betts who really shone. In his 300th game, the fan favourite registered 6 majors.

With a midfield packed with quality, and plenty of experience down back, the Crows have all the ingredients for success.

If they can replicate their Round 5 performance here, they'll be winning by a margin.

Reasoning: As stellar as St Kilda's defence has been, Geary is a crucial cog. Without him, the Saints might slip up.

Sydney's search for their second win of 2019 doesn't get any easier this week, as they host GWS in the Sydney Derby.

The Swans have been poor this campaign, with many touting that their era of successive finals appearances is about to end.

GWS meanwhile will look to establish themselves as the dominant Sydney side with a big win.

However, after getting shocked by Fremantle in Round 5, you wouldn't be tipping the Giants with much confidence.

Sydney look like they lack speed, with their two core midfield players of Luke Parker and Josh Kennedy playing like they are over the hill.

Both of these players base their games on contested possessions, where they usually perform well.

But with little speed to carry the ball from the centre bounces, it's no surprise the Swans are currently ranked third-last for centre clearances.

They'll need to find another way to win against the Giants.

With top defenders like Dane Rampe and Jake Lloyd, maybe a defensive masterclass is the way to go for John Longmire.

Co-captain and star defender Phil Davis is likely to sit out after injuring his ankle late on in last week's 4-goal loss to Freo.

If the Giants can keep Buddy in check without Davis, then they're in the box seat to get the win here.

That's because they have a midfield jam-packed with talent that looks to be too hot for the Swans' mids to handle.

And with Toby Greene set to finally make a return from a niggling calf injury, GWS have too much firepower all over the park.

Reasoning: The Swans have been very poor in 2019, and based on that form, GWS should win and win well.

The Dockers are well-and-truly on the way up, with last week's sensational 24-point win over GWS sending them up to 3rd spot on the ladder.

The Western Bulldogs meanwhile dropped down to 14th, after losing their 3rd straight match.

And worryingly for Dogs fans, it came against the previously winless Blues.

Ross Lyon has always been a defence-first coach, and it's no surprise that Freo have conceded the fewest points in the competition with just 337.

However, the real positive out of last week was how easily they scored against the Giants.

Taberner also missed a couple of sitters. If he can learn to kick straight, then he'll become one of the AFL's most damaging full forwards.

Alongside new recruit Jesse Hogan who also booted three, and with Nat Fyfe running the show from the midfield, Freo are looking the goods.

The Dogs have hit the slippery-dip after an impressive start to the season.

Last week was easily their worst performance yet, getting walloped by 44-points against the Blues.

Star midfielder Marcus Bontempelli was poor, while Lachie Hunter was also very quiet in the midfield.

These two hold the key to the Dogs' success not just here, but all season.

A standout performance from both would likely get the Dogs over the line, but based on their recent form, it isn't looking likely.

Reasoning: The Dockers could drop a gear from last week's performance and still be too good.