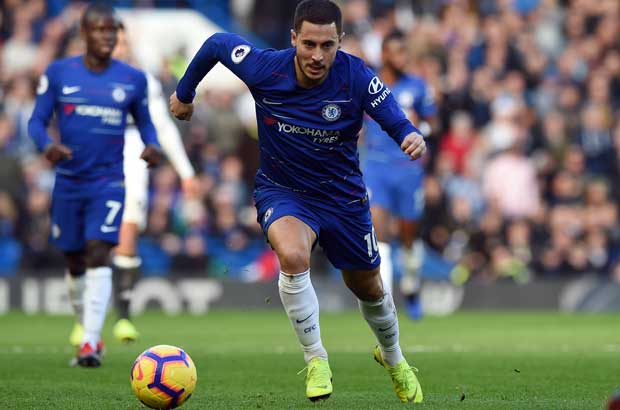 Could Reds stumble at final hazard?

The EPL title race takes centre stage once again this weekend, when Liverpool host Chelsea as their last "Big Six" opponent of the season.

Man City face Crystal Palace just hours before, where a win will take them back to the top of the table.

But before the title race heats up, it will be all about the relegation battle when Cardiff travel up to Burnley.

Read our match previews and EPL betting tips for these fascinating fixtures.

If the EPL odds are anything to go by, relegation is no longer a threat and now a near-certainty for Cardiff City.

With just six games to play, two of which come against Liverpool and Man United, this fixture becomes a must-win game for Neil Warnock's men.

Sitting 6 points from safety, a draw just won't be good enough in Cardiff's quest for survival.

Therefore, expect the Bluebirds to come out attacking here.

If they can get the goals, then the visitors have the defence to hold on for the win.

In their past 3 EPL games, the Welsh side has conceded 4 goals.

Two came against Man City last time out, in a game where many expected the Citizens to net five or six.

The other two were against Chelsea, one of which should have been pulled back for offside.

In other words, if the Bluebirds only really conceded 3 goals against Man City, Chelsea, and West Ham before that, they should have no trouble keeping Burnley scoreless.

Having said that, the Clarets present a different kind of defensive challenge.

An old school team, Burnley are a side who aren't afraid to play long balls up to strike duo Chris Wood and Ashley Barnes.

As well as playing via route one, Burnley are also a massive threat from set-pieces.

Indeed, the Clarets have scored 10 headed goals this EPL campaign, with only Liverpool, Everton and Tottenham having scored more.

Sean Dyche's men are also in good recent form, having won their previous 2 EPL games, each by a margin of 2+ goals.

These wins came against Wolves and Bournemouth, where Burnley enjoyed just 37% and 40% of the possession respectively.

With Cardiff set to come out and attack, Burnley will look to sit deep in defence once again.

And as they have shown in the past, this won't worry them at all. In fact, it suits their old school style of play.

Reasoning: With recent good form, look for the Clarets to dash Cardiff's slim chances of survival.

Man City's quest for a historic quadruple will be the talking point once again when they take on Crystal Palace in South London.

Having already won the League Cup, the Citizens are very much in the hunt in the FA Cup, Champions League, and of course, the EPL.

As the only English team still juggling three competitions, City have a very hectic schedule.

Common sense says that this will catch up with them eventually, and perhaps their midweek loss to Tottenham in the Champions League was the first sign of that.

After such a big game during the week, and the return leg scheduled for next Thursday, any normal team would have their depth stretched to the limit.

But City aren't a normal team. Their financial backing means that their depth is unparalleled by almost any other team in world sport.

This means that players like Kevin De Bruyne, Leroy Sane, Bernardo Silva and John Stones were left out of City's starting line-up against Spurs.

These players would all be walk-up starters in just about every other football team on the planet.

Expect them to be rotated in for this EPL clash, which is crucial in the Citizens' Premier League push.

Speaking of their EPL form, it has been something else.

All eight of these games have resulted in a victory for Pep Guardiola's men.

To say that Palace have their work cut out for them is an understatement.

They aren't without a chance though, and generally lift a gear when playing at Selhurst Park.

The Eagles are coming off a 1-0 away win to Newcastle, where some Wilfried Zaha magic earnt a penalty that was routinely dispatched by Luka Milivojevic.

Milivojevic is Palace's top scorer this campaign with 11 goals, ten of which have come from the penalty spot.

Zaha isn't far behind on 8, and Man City's first defensive task will be shutting him down.

Reasoning: With so much talent to come back in, and a defence that has been near-flawless in the league, this EPL bet looks the goods.

The undoubted highlight game of the round sees Liverpool host Chelsea in what will provide the biggest clue yet as to who will be winning the league.

This is Liverpool's last game against Big Six opposition, whereas City have to play both Tottenham and Man United.

If the Reds can earn three points here, it would be hard to see them losing any of their remainder games, which are against much easier opponents.

Turning to the game itself, Liverpool have the benefit of not just playing at home, but an added two days rest.

Jurgen Klopp's men played Champions League on Wednesday, while Chelsea face an inconvenient away trip to the Czech Republic on Friday in the Europa League.

This was also after an EPL game against West Ham as recently as Tuesday morning.

Playing three games in six days is a logistical nightmare that Sarri and Chelsea will need to overcome.

Recent form also suggests that the Reds are in the box seat.

They have won six straight games in all competitions, including impressive wins over Bayern Munich and Tottenham.

Chelsea meanwhile have only won three straight, including an unconvincing victory against Cardiff where every fifty-fifty call went to the Blues.

The Blues also have the 2nd worst away record of all the Big Six teams.

Liverpool meanwhile have the best home record league wide, really turning Anfield into a fortress that has only been breached once this season.

Having said all of that, the best player on either side of the pitch is Blues' star Eden Hazard.

Hazard showed in the game against West Ham what he's capable of, scoring twice, including a goal of the season contender.

Even Liverpool's sturdy defence will struggle if Hazard replicates that display.

But with Mo Salah recently scoring a top solo goal of his own, and the likes of Mane and Firmino in red-hot form, the Reds pose a broader attacking threat.

Look for that to translate into a strong win by the home side.

Reasoning: At home, against a travel-weary Chelsea, and with so much to play for, Liverpool should be winning by at least 2 goals here.