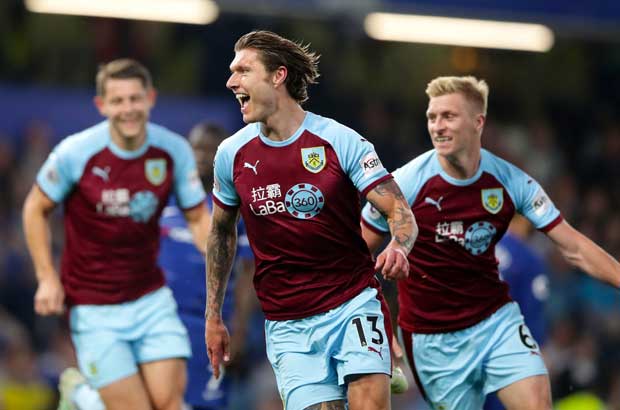 Could City stumble against stubborn Burnley?

With only three more rounds in the EPL remaining, there are so many fascinating fixtures and story lines heading into this weekend's action.

The final London derby of the season will see Spurs look to hold off a determined West Ham.

Then, the bookies are predicting that City will take one step closer to defending their EPL title when they take on Burnley.

And lastly, the attention shifts to the top 4 race, when EPL giants Chelsea and Manchester United butt heads.

Read on for our previews and EPL betting tips.

The last London derby of the 2018/19 EPL season will take place in the capital's newest stadium, when Spurs host the Hammers.

The new Tottenham Hotspur Stadium has proved to be the shot in the arm Spurs' supporters were hoping it would be.

In their new digs, Tottenham have a perfect record, winning all four of their games.

Spurs are also yet to concede a goal at the new ground, with captain and World Cup-winning goalie Hugo Lloris keeping 4 clean sheets.

Not only do Spurs have the motivation to maintain a flawless record and defeat their London neighbours in the process, but there is something more tangible to play for.

A win here, and Mauricio Pochettino's men will effectively secure a top 4 spot, with the chasing pack of Arsenal and Man U both losing midweek.

However, with their Champions League semi-final scheduled for Wednesday, don't be surprised if Poch prioritizes that game and rests key players here.

Both Son-Heung Min and Christian Eriksen have played big minutes in recent weeks, and they could be left on the bench.

And with Harry Kane out injured, that leaves Lucas Moura and Fernando Llorente to lead the line.

West Ham coach Manuel Pellegrini will be confident that his defenders can keep these two in check.

While the Hammers aren't in the best run of form, they're always up for a London derby.

Furthermore, they would love to be the first away team to secure a result at the new stadium.

They're coming off a 2-2 draw with Leicester, where the Foxes equalized in stoppage time.

Therefore, while they haven't won a game since they beat cellar-dwelling Huddersfield on March 17, the signs are there that a win isn't far away.

While it's probably too big an ask to get all three points here, a draw isn't beyond them.

Especially with players like Felipe Anderson and Marko Arnautovic in their side.

Reasoning: With plenty of injuries and the likelihood they'll rest players, Spurs will be troubled by West Ham.

After they leaped over their last major hurdle on their way to the EPL title, Manchester City will be full of confidence here.

A superb second-half display saw them prevail 2-0 in the Manchester derby on Thursday morning, sending a dagger through Liverpool hearts.

The Citizens now face Burnley, Leicester and Brighton in their final three fixtures. If they can win all three, then they will defend their EPL crown.

Considering that they've now won 11 straight EPL games, this looks like nothing but a formality.

However, crazier things have happened and City fans certainly won't be getting ahead of themselves.

Going to Turf Moor and coming away with a result is no easy prospect.

And with the form Burnley are in, you've got to think the bookies have gone a little overboard in installing them as $18 outsiders in the EPL odds.

The Clarets won three straight games before they headed down to Stamford Bridge midweek.

There they produced one of their trademark performances to hold Chelsea to a 2-2 draw.

Sean Dyche's men had just 24% of the possession, and conceded 22 shots at goal, only to concede twice.

At the other end, they were clinical, scoring 2 goals themselves from just 6 shots at goal.

This display was just another example of Burnley's pragmatic style when they come up against Big Six sides.

While many accuse Sean Dyche of playing "anti-football", this style has continued to keep Burnley in the EPL despite their relatively scant funds.

Coming up against a side of Man City's financial superiority, expect another display of this so-called anti-football.

The Clarets will sit deep in defence, and look to score from set pieces.

Only Everton and Liverpool have scored more goals from set pieces this season than Burnley.

They'll certainly give the Citizens a few scares.

Reasoning: The Clarets have been in great form lately, and have a game style that will worry City.

The highlight game of the round sees these EPL heavyweights lock horns in game that will go a long way to deciding the make-up of the top 4.

Currently three points behind 4th-placed Chelsea, and with a worse goal differential, this game is must win for Man U.

The Red Devils have had a rollercoaster campaign, demonstrating how quickly things can change in football.

After Jose Mourinho's disaster run, Ole Gunnar Solskjaer took over and was hailed as the club's saviour, after losing just 1 of his first 17 games in charge.

However, since then United have lost 7 of their 9 games, in a horror run that has seen them drop out of the UCL and FA Cup, and fall away from the Top 4 in the league.

In their last 3 games, they've conceded 9 goals and scored none, albeit against tough opposition including Barcelona and Man City.

Having said that, there were definite signs of improvement against Man City in the derby, where they were far from disgraced.

A piece of poor defending from Luke Shaw and a goalkeeping error from David de Gea proved to be the difference in the end.

If they can quickly put that result behind them, then expect them to bounce back against Chelsea.

Speaking of the visitors, they have also made hard work of their top 4 chances.

Their previous two EPL games were a 2-0 defeat to Liverpool and a 2-2 draw against Burnley.

After scoring in the recent draw, N'Golo Kante was injured and forced to leave the match through injury.

After Eden Hazard, Kante is Chelsea's best player, and will be sorely missed here.

Young winger Callum Hudson-Odoi was also injured in the 2-2 draw, and will be out for quite some time.

However, the Blues are another team with an embarrassment of riches, who have plenty of cover for both these players.

Pedro and Mateo Kovacic will likely come into the side, and these two have enough ability to swing the game in Chelsea's favour.

If they can find the energy away from home, then Chelsea will get the win.

Reasoning: Chelsea are going better, but the match being played in Manchester balances it out.