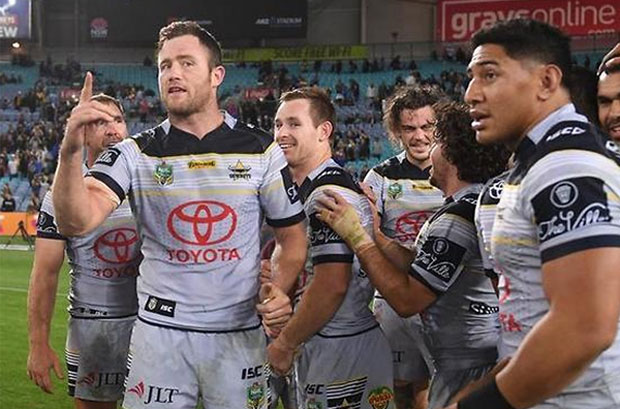 Support for NRL Grand Final underdogs North Queensland Cowboys continues to build with Michael Morgan a surprise runner up in Daly M Medal, player of the year on Wednesday night.

Earlier in the week Cooper Cronk declared Morgan as the best half back in the NRL right now. Morgan and Cronk played together in three State of Origins and also represented Australia, when Cronk quietly gave Morgan some valuable advice during and origin camp that helped Morgan refresh a new mindset and polish his playmaker tactics.

Cronk admitted he may live to regret the advice he gave to Morgan but added that the Cowboys number seven had worked hard on his game under the guidance of coach Paul Green and the masterly leadership of Jonathan Thurston. The Storm half-back sees Morgan as one of the main reasons why the Cowboys have made it to the Grand Final.

The Hulk can destroy The Storm

And while the experts might be tipping the Melbourne Storm to take Rugby League's most coveted trophy back to Victoria, one man may hold the key to breaking the Storm's defense, raining on Cooper Cronk's victorious farewell.

That man is Kiwi and Tongan international and Cowboys superstar Jason Taumalolo. He has admirers a plenty among NRL fans and experts, but it's not just his eyecatching performances that attract all the attention, Taumalolo also has the stats to back up his steam rolling attacking style of footy.

This year has seen the Cowboys number 13 rack up an impressive 4230 running metres for the season, the second year he has ticked over the 4000 metres, that's almost 1000 metres more than the Storm's best running man, Josh Addo-Carr with 3327 metres.

Every time the hulking 191 cm, 113kg Taumalolo runs out onto the field he's averaging 201 metres per game.

Taumalolo sparks fear into the opposition, he runs straight and hard with unrelenting power and breaks the line through sheer determination and strength. His barnstorming brand of league could be the key to tire the Storm's forwards and create opportunities for Morgan and ultimately points for the Cowboys.

And if his blitzing game against the Roosters on Saturday night where he made 256 metres is anything to go by, the Storm will need to have him well and truly contained during the grand final or risk having him gain valuable metres into their half.

NRL legend Andrew Johns said he's never seen a forward like him, he has been the Cowboy's best player this season and believes he is crucial to the Cowboys success.
And just in case Taumalolo needed anymore fire in his game, Wednesday night he was controversially left out of the selections for "Team of the Year" at the Daly M Awards, certain to lift the star to another level on Sunday.

Taumalolo is at $10 in betting to take out the Clive Churchill medal, and Morgan is $10 with Ladbrokes.

If Taumalolo wins, it will be the second year in a row a Lock has won the prestigious prize, with the Sharks's Luke Lewis taking it out in 2016.

Watch Sunday's Grand Final live on Channel 9. Pre- match entertainment from ANZ Stadium starts at 6.30pm with the game kicking off at 7.15pm.