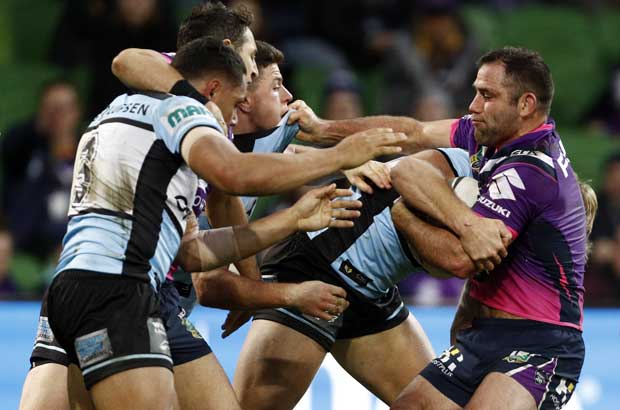 Jump To: Roosters vs Souths Storm vs Sharks

What a spectacle this is set to be!

The winners of the past two premierships go head-to-head this Friday night to add another chapter, in what is building as one of the biggest rivalries in the NRL.

With both Billy Slater and Luke Lewis set to retire this year, it’s not only a Grand Final berth at stake but an opportunity to send one of these club legends out a winner.

The Storm impressed in the first week of the finals, defeating the Rabbitohs at home in a one-point thriller.

What made the win even more impressive was that the Storm went into the game without three of their regulars - Will Chambers, Ryan Hoffman and Nelson Asofa-Solomona – who will all be welcomed back for this week’s clash.

The Sharks fell to the Chooks in week one of the finals, but last week managed to bounce back against a fast-finishing Panthers side.

The loss of Wade Graham proved significant, but Matt Moylan stepped up, relishing the extra responsibility and playing arguably his best game since moving to Cronulla.

With a home ground advantage in their favour, the Storm goes into this clash as favourites. But with such a strong winning record over their rivals in recent times, the Sharks represent good value for punters.

For the Storm to win..

They'll need to dominate the ruck, which means tightening up their defence in the middle third of the park.

With such a dominant spine, the only way the Storm should lose this game is if they allow the Sharks big forwards to build momentum through the centre.

If the Storm's pack can go toe-to-toe with the Sharks, the experience of Cameron Smith, Billy Slater and Cameron Munster will get the job done.

While the Sharks have with plenty of talented players, two players stand out above the pack with their ability to break a game wide open.

Matt Moylan's kicking game must be on-song once again. Moylan had the ball on a string last week against the Panthers which led to Sharks dominating field territory. With two try-assists this was arguably Moylan's most impressive effort in Sharks colours.

Andrew Fifita is the second of the Sharks game breakers. The Sharks powerhouse forward is a momentum player, and for Sharks fans, it's often a case of good Fifita vs bad Fifita.

Fifita leads the Sharks forwards in runs, run metres, tackle busts and arguably his biggest weapon, offloads. The dual international representative lets himself down in the discipline department where he leads the Cronulla forwards in errors made and penalties conceded.

As we witnessed in the 2016 Grand Final, the good Andrew Fifita is almost unstoppable, and a repeat of that performance will take the Sharks a long way in this clash.

Highlights of the Round 22 Storm and Sharks clash.

Reasoning: The Storm has a clear advantage coming off a one-week break, and with fresh legs, should get the job done in a close encounter.

With serious injury doubts over captain Paul Gallen, the Sharks will need to produce a monumental effort to roll the Storm at home but do represent great value at the line of +8.5.