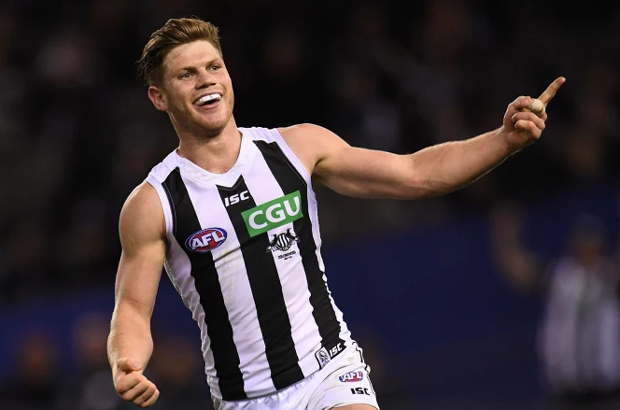 Writing is on the wall for Bucks

Australia's biggest club fanbase wouldn't be happy with the footy dished up by the Magpies over the past few seasons. Finishing outside the top 10 in the last four seasons, albeit in a rebuilding phase for the club, simply isn't good enough for Collingwood's vocal fans. Ex-player and club legend Nathan Buckley has overseen this troubling period, and it seems that the fans' appreciation of him is starting to wane, with the coach's head well and truly on the chopping block.

However, the second half of last season gave the impression that Buckley had finally managed to pull it all together. Collingwood only lost 2 out of their last 7 games, and these were against two top-six teams in Geelong and Port Adelaide. With a squad chock-full of promise, this is shaping up as the year where the Magpies return to finals footy.

A team adept at controlling the tempo of the game, Collingwood ranked first in marks per game in 2017 (105.7), and second in both kicks (222.6) and disposals (402.9). While not having particularly high contested possession numbers, this suggests that when Collingwood do find the ball, they keep it well and have the ability to dictate the play.

With a favourable draw that sees them playing GWS, Adelaide, Sydney, Geelong and Port Adelaide only once, Collingwood are primed for a massive surge up the ladder. If they can build off the end of last season's positive finish and up their contested ball numbers, the Magpies have all the talent to produce a performance paralleling Richmond last season, who went on to have a massive year after finishing 13th in the previous season.

Player to watch: Brayden Maynard is one of Collingwood's brightest prospects, and had a solid 2017. As a defender in the early stages of his career, averaging 17 disposals a game speaks volumes. With a booming kick and a good pair of hands, look for him to have a stellar year.

Key Player: Taylor Adams had a remarkable 2017, establishing himself as the new gun midfielder in the AFL. Ranking first for Collingwood in contested possessions (257), tackles (140) and score involvements (160), Adams really made the midfield his own.

For a young team, Collingwood's defence is surprisingly experienced. With Lynden Dunn and Tyson Goldsack capable of holding down most forwards in the league, high-flyer Jeremy Howe will be protecting his goals from the air, cutting off forays forward from opposing players.

Another positive coming from the Magpies' last season was the performance of their forwards, who excelled despite having more than their fair share of injuries. Alex Fasolo and Darcy Moore both had impressive returns with 29 and 25 goals respectively, but it was the dynamic Jamie Eliot who was most damaging, booting 34 goals from just 17 games. Both ready to peak, Eliot and Moore are set for huge seasons.

Competing with fellow young gun Taylor Adams is Adam Treloar, who is just as key to Collingwood's success this year. Fleet of foot, and an excellent ball carrier, Treloar will be looking to burst through the midfield. Captain Scott Pendlebury and the super-skilled Daniel Wells provide extra class to one of the league's burgeoning midfields.