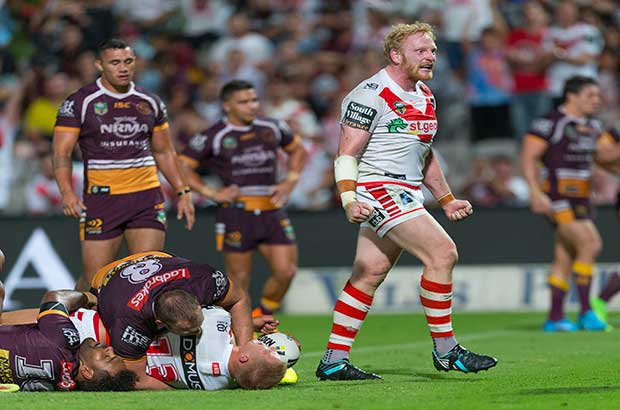 Saints to take it to Benny's Broncos

The Broncos are on a three-game winning streak after defeating the Roosters, Souths, then Manly last week.

This spell of good form has demonstrated that they have what it takes to match it with the best teams in the competition.

Halves Anthony Milford and Kody Nikorima have answered their critics in recent weeks, but they'll have to rise to a new level if the Broncos are to be a force in the premiership race.

Winning form is good form, however Brisbane have shown a tendency to take their eye of the ball when facing lower ranked teams this season.

Their last three losses came against the Cowboys, Bulldogs and Warriors - all unfancied outsiders.

Beat the bookies betting on NRL? Read the NRL betting strategy from a professional punter here

Meanwhile, the Dragons' form has been nothing short of ordinary coming off a gruelling State of Origin series where many of their key forwards were involved.

In a boost for the Red-V, captain Gareth Widdop returned from an elbow injury last week, just in time to secure the Dragons’ second win in six games.

With a star-studded line-up, it’s difficult to imagine St George won’t be up for a big one against the Broncos this week.

Although the vocal Brisbane crowd will be against them, the atmosphere of Suncorp on a Sunday afternoon in September will be electric.

The Dragons will take confidence from their most recent clash with Brisbane, where they were victorious 34-12 at Jubilee Oval.

Even though that was way back in round one, it was a dominant win and the Dragons will need to ride on any confidence boost they can get.

Reasoning: The Dragons have been under huge scrutiny from fans and the media in recent weeks, and rightfully so.  They possess a quality forward pack who haven't performed well but do have the ability to dominate the younger less experienced Broncos forwards.

Look for their forwards, led by James Graham, to fire up and set a solid platform for Widdop and Hunt to work their magic. This game will closer than most expect and could produce the upset of the round.