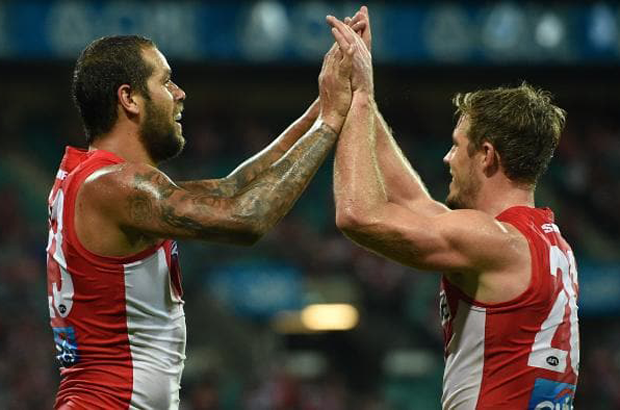 Another crack at the flag

Last season, the Swans became the first team in AFL history to make the finals after losing the first 6 games of the season, ending up in an impressive 6th. However, this late scramble to make the eight seemed to sap the energy of Sydney, who were thumped by Geelong in the semis, 98-39. For a club as proud as the Swans, this heavy defeat would've been gnawing at the players in the off-season, with coach John Longmire sure to have his players champing at the bit to make amends at the beginning of this season.

Despite having a tough first 6 games, you could just about bet your bottom dollar that the Bloods won't go 0-6 to start this year. This then gives way to a cushy mid-season, which sees Sydney face the Dockers, Lions, Blues and Saints in consecutive weeks, with a few thrashings well and truly on the cards.

As you would expect, the Swans ranked right up there for contested possessions and contested marks last year. However, in a surprising statistic, the Bloods only ranked 12th in tackles per game (69.3). This is the type of stat that would bring shame to a team whose forte for the past decade has been tackling. Expect a drastic upsurge in tackle numbers this year.

A team noted for their stingy defence, the Swans once again conceded the fewest points per game last year (75), despite finishing as low as 6th. This bodes well for 2018, in a competition with a multitude of attack-minded teams. A squad with a fantastic defence, plus a gun midfield and Lance Franklin standing at full-forward reads as a certain premiership contender.

Player to watch: Will Hayward was a revelation in 2017, booting 22 goals from 17 games in his debut season. Having only recently turned 19, and with plenty of physical growth to come, expect a bigger, badder and more damaging forward this year.

Key player: The Brownlow runner-up from 2016, Luke Parker shapes up as the player who will be winning the Swans' best-and-fairest award this year. In another stellar year in 2017, Parker ranked first at Sydney for contested possessions (317), tackles (134), and clearances (155). Complementing this hard stuff in the middle, Parker gets forward and boots goals too. Now 25, he is set for a huge year.

The pillar of Sydney's stingy defence is Dane Rampe, who with his ability to match up against both the bigs and smalls, is the league's best defender. His partner in crime, Heath Grundy, is a rock who can out-muscle anyone, and provides cover for Zak Jones, Callum Mills and Jarrad McVeigh to kick start Sydney's attacks. Jones's speed and toughness are particularly damaging.

A forward line that contains Lance Franklin will always provide a very serious threat. The Coleman medalist from last season, Buddy was on fire, kicking 73 goals in a total which can be improved this year. However, fellow forwards Sam Reid and Tom Papley can be inconsistent, in an attack which will struggle if Buddy isn't firing.

Part of Sydney's below par tackle numbers can be attributed to the injury of Josh Kennedy, who is a tackling and contested ball freak. Alongside Parker, and Dan Hannebery who is just as good in the scrap as on the outside, Sydney's midfield is typically imposing. Add Isaac Heeney who made his transition into the mids last year, and you have one of the league's best midfields.