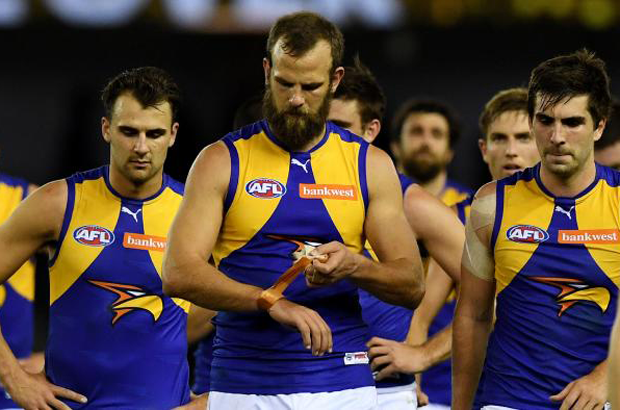 Eagle fans set to be homesick

2017 was a solid year for West Coast. Scraping in to the finals in the last regular-season round with a shock win over the Crows, the Eagles made it to the semi-finals where they were bundled out by the Giants (125-58). There’s no doubt that coach Adam Simpson will be using that 67-point thrashing to fuel his players’ motivation heading into the new season.

Eagles' best asset Jeremy McGovern is an outstanding young defender who was unequalled last year in contested marks, racking up 61 to lead all comers. An expert at cutting off  the opposition's attacking forays, there will be big expectations on McGovern to back up his heroics from last season.

The Eagles have played finals football in each of the past three seasons. The cornerstone of this success has been their dominance at home, winning a staggering 28 out of 33 (85%) games at Subiaco Oval in this period. This year will see a change of scenery for West Coast however, as they move into the newly completed Perth Stadium.

Despite being within spitting distance of Subiaco, the Eagles will feel unfamiliar in their new home, putting their excellent home form record under serious pressure. Facing a highly rated Swans outfit at home in round one, the Eagles could find themselves on the end of a towelling which will quickly make the West Coast faithful homesick.

The new surroundings coupled with the retirements of former Brownlow medal winners Sam Mitchell and Matt Priddis at the end of last season, means that the Eagles are set for a slide down the ladder.

Player to watch: Liam Duggan is one of the Eagles' genuine up-and-comers to look out for. With a sweet left boot capable of picking out teammates in space, Duggan is primed for success in the league. With more of the ball in his hands, he will be a damaging player this year.

Key player: Full forward and goal-scoring freak Josh Kennedy will hold the Eagles' fate in his large hands. Despite missing a significant chunk of last year through injury, he finished second to Lance Franklin in the race for the Coleman Medal. He needs another stellar season if the Eagles are to make the eight for the fourth year running.

McGovern and young talent Elliot Yeo will be hoping to be a damaging force from the half-back line. Both capable of intercepting marks and launching counterattacks, they will be key to West Coast's success.

With Kennedy leading the attack, and the ever-reliable Mark LeCras and Jack Darling in support, the Eagles have plenty of goals in them. Whether they can get the service from their midfielders is another thing.

The Eagles lost a wealth of talent and experience in the midfield when Mitchell and Priddis both retired at the end of 2017. While having competent seasons last year, Andrew Gaff and Luke Shuey need to have staring roles this season, and will be crucial to the balance of the whole team.