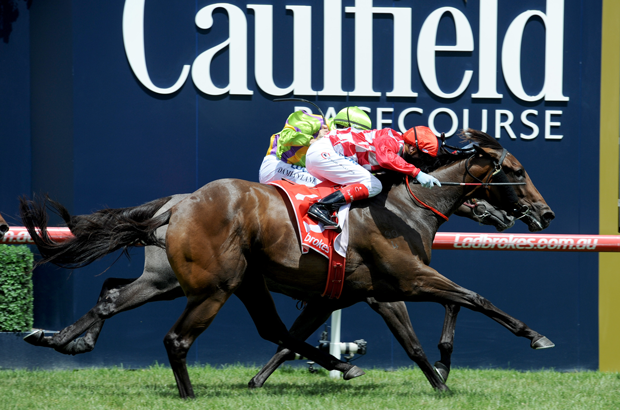 The two-year-old fillies should fly along in this year's edition of the girls' Blue Diamond Preview.

The limited race experience for most of these runners represents a significant challenge for punters doing the form, however betting market moves will be an excellent guide.

I am with one who was ultra impressive on debut and looks "bomb-proof" to my eye.

The Caulfield surface is currently rated a Good 4, with the rail out 6m the entire circuit.

Clearing conditions are predicted in Melbourne for the remainder of the week and on Saturday.

With the rail out 6m at Caulfield, there may be a slight advantage for those which race close or on speed. However in these two year old events, they can track wide in the moving line throughout and still win.

As always, a close watch is advised early to determine any fast lanes or bias.

Race favourite Fresh remains steady in betting at the $3.00 mark.

There are no other significant market moves at this stage.

Is from the Hayes stable who have been quiet lately, however they seem to fire at this time of year with their two year old's.

She has good race experience following two career stars, where she ran well in each and was fancied in the market at her latest.

From gate 8, I expect them to use her proven tactical speed to be close in the run. That will be a significant advantage over this 1000m scamper.

Won well last start at Flemington, when she ran on strongly to get home narrowly.

The draw in gate 6 looks a big positive, as she will have room and plenty of options from there.

She is presented by the in-form two-year-old stable (Maher/Eustice), who have already won the Magic Millions. It would be very brave to doubt this yard's ability with the youngsters. Yes.

Was popular in the market and expected to race well on debut at Flemington, before just missing by 0.1 lengths behind A Beautiful Night.

She showed good early speed to lead with ease on debut and was only just collared late.

Expect her to take improved fitness from the last start effort and she can be stronger late here. Top hope.

Found to be lame last start and tipped out for a three week break since.

She did start favourite ($3.30) last time and from an SP profile angle, that has to be respected.

I could not have her based on the set back from that run, however if she's recovered then she could easily be in the finish here.

Ran home strongly to win at Bendigo on debut and brings excellent form lines from that race, having beat home A Beautiful Night who has since won.

She drops down in weight and while this field is much deeper, has to be considered. Leading chance.

Could not have been more impressive on debut, when she was heavily backed late ($2.35 to $1.90) and won with ease at Geelong.

This is much harder against the two-year-old topliners, however she does look to be something very special.

Expect them to ride her with ultra confidence, sitting wide in the moving line and still win.

Appears bomb-proof and must go on top.

Another heavily backed filly ($2.10 into $1.75) on debut at Geelong, who ran right up to the hype when leading throughout to give nothing else a chance.

Look for her to lead again here from gate 5 and be kicking for a long way.

I love the jockey change to Ben Melham, who is one of the strongest riders in Melbourne and is sure to show good intent. Yes.

Is Godolphin's sole hope in the race and in their deep talent pool, they would have had plenty of good fillies to choose from.

I'm inclined to risk based on the debut SP profile. No.

Is on debut with no public trial.

She is presented by the McEvoy yard and they should always be respected.

Betting is the only guide here.