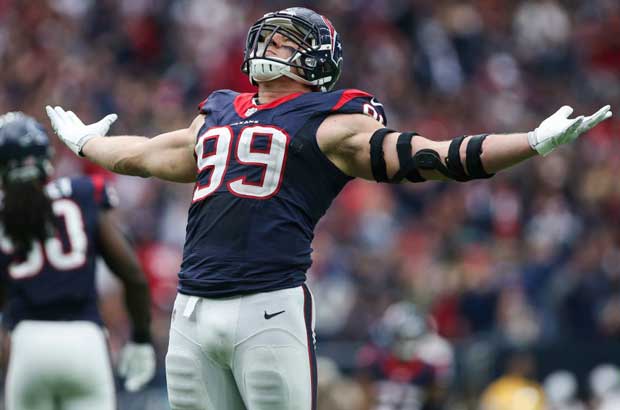 The Battle of Texas

The first month of the NFL Season has already flown past and only two teams are left undefeated.

The big surprise packet has been the Kansas City Chiefs, who have put all AFC teams on notice largely thanks to QB Patrick Mahomes.

At just 23 years of age and in his second season in the NFL, ‘Showtime Mahomes’ could not be directing the Chiefs in a more impressive fashion.

The week four match-up against Denver was picked by most pundits as his make-or-break game for the season, given it was his first real test against a top 5 defence.

Mahomes put in a masterclass, exhibiting poise and a cool head to lead his team to a 4th quarter, 10-point comeback at Mile High Stadium.

To put that performance in perspective, no team had done this since 2004.

In the NFC, the Los Angeles Rams have lived up to pre-season expectations and bolted out of the blocks. Each performance has added weight to their NFC Champion favourites tag and bookmakers have responded, shortening their odds to win the title into $2.80 from $7 at the start of the season.

The Rams’ roster is littered with talent and it seems as though the NFC is theirs to lose.

Whilst both the Chiefs and Rams’ squads are surging, a number of franchises that made the playoffs last year are floundering at or below .500.

As a result of the unpredictable nature of team performances so far this season, bookmakers are struggling to accurately set markets.

Our experts have uncovered terrific value in the three feature games of match-week five.

The game of the week places the undefeated Chiefs up against the 3-1 Jaguars.

Our praises for the Chiefs have already been sung however it’s time for bettors to return to logical thinking and avoid getting swept up in the Kansas hype.

A blistering Chiefs attack is eventually going to have an off week and our experts believe this is the game it will all unravel.

Last week's brilliant win only occurred as a result of Denver’s QB, Case Keenum, missing a wide open Demaryius Thomas in the final 20 seconds of the game that would have handed the Chiefs their first defeat of the season.

The Chiefs got absolutely dominated on the run on that occasion and the Jaguars’ run offense is undoubtedly better than the Broncos.

Furthermore, Jaguar’s QB Blake Bortles is finally coming into his own and is looking more and more confident, notably improving his touchdown/interception ratio from previous years.

Expect Mahomes to be under pressure in this game, with Jacksonville's defence amongst the top 5 in the league.

The last time the Jaguars faced a star QB was in match-week 2, when they limited the Patriot's Tom Brady to 230 passing yards and only allowed 82 yards on the run.

This water tight-defence inspired Jacksonville to their most convincing win of the season to date.

Take the bookmakers on and back the underdog.

When the Jets put up 48 points against the Detroit Lions in week 1, expectations rose in New York with suggestions the team could have a successful season to finish around .500, despite going through a squad overhaul in the off-season.

Last week’s loss to the Jaguars made it three straight defeats however, bringing Jets fans back to Earth with a thud.

In worrying signs for coach Todd Bowles, rookie quarterback Sam Darnold completed less than 55% of his throws in those three losses, with only one resulting in a touchdown.

While Denver are not exactly setting the competition alight, they are as solid as teams come.

No team ever enjoys coming up against the Broncos, who possess one of the league’s most effective rush defense led by Von Miller and Bradley Chubb.

Darnold is yet to face a pass rush like Denver’s and he could be in for a long afternoon if Miller and Chubb run riot.

Expect the Broncos to get the chocolates in this one.

The Sunday Prime Time Game is the battle of Texas, involving two teams struggling to decide if they want to be contenders or pretenders.

Returning from a torn ACL, Texans QB Deshaun Watson is slowly getting back to his rookie form, which was on display in their OT win against the Colts last week.

In an additional benefit, former NFL Defensive Player of the Year J.J. Watt looks to have overcome his season ending injury from last year, and is back doing what he does best- sacking QBs.

As for the Cowboys (2-2), they have been all over the place in the opening month of the season.

NFL Fans are aware of how good running back Ezekiel Elliott can be, but the burden they are placing on him is slowly but surely burning him out. News during the week that he is carrying a few knocks will be causing coach Jason Garrett some sleepless nights.

Furthermore, QB Dak Prescott is struggling to capture the magic of his rookie season and his woes have been compounded by the fact that he has no legitimate downfield threats at his disposal.

Take the Texans at home with confidence here.