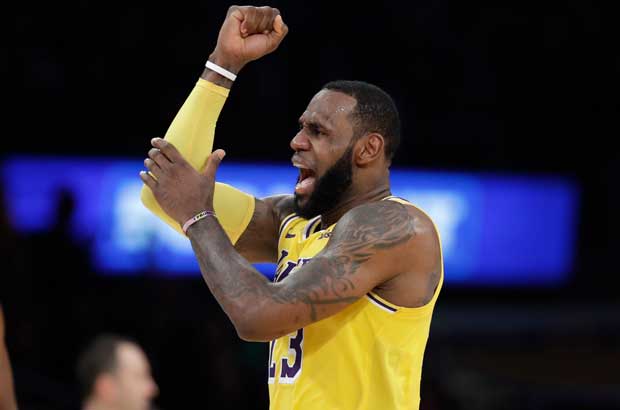 James vs James: Will Harden or LeBron prevail?

Another bunch of interesting Friday fixtures is highlighted by the battle between two of the NBA's biggest stars.

LeBron James's Lakers will travel down to Texas to take on James Harden and his Rockets.

Another fixture pits a Texan team against a side from the City of Angels, when the Spurs play the Clippers in San Antonio.

The remaining game takes us further south, where the Orlando Magic will host the Chicago Bulls not in Florida, but Mexico City.

Friday's NBA action tips off in Houston where arguably the two greatest NBA players of the past five years will do battle.

The reigning MVP James Harden will come up against four-time MVP LeBron James in one of the most anticipated match-ups in any season.

Harden helped Houston snap a three-game losing run last time out, as the Rockets got the better of the Blazers 111-104.

Alongside Harden's 29 points, Chris Paul recorded a triple double with 11 boards, 10 assists and 10 points in a solid all-round performance.

While this was a good win at home for the Rockets, it did little to suggest that their poor start to the 2018/19 NBA season is behind them.

Their shooting percentage of 44.8% remains one of the worst in the league, despite the boost it got against the Blazers where they shot at almost 50%.

Houston's poor shooting this campaign has been one of their pitfalls, and despite the improvement last time out, there's nothing to suggest it will stay that way.

That's because, the combined shooting percentage from the Rockets previous three games sits at 44.4%, which is even worse than their season average.

If they shoot somewhere near this figure against the Lakers, LeBron's quality will be too much for the home team to handle.

The visitors are looking to secure their third win on the bounce, as well as their seventh victory from eight outings.

Based purely on form, the Lakers should be winning this game comfortably.

However, you have to take into account the fact that Rajon Rondo and Brandon Ingram, two of LA's starters, will miss through injury.

Furthermore, in their last away game, the Lakers went down by a sizeable 13 points to San Antonio.

In this game, the Lakers led all the way before a 44 to 21 final quarter to the Spurs saw LeBron's Lakers fall short.

Ingram and Rondo sat out this game as well, and their quality was sorely missed in the latter stages.

LeBron will need to carry the team here.

Expect a tight game and the Lakers to cover the line.

After their phenomenal start to their 2018/19 campaign, reality is starting to catch up with the Clippers.

There's no way they could sustain the numbers they were putting out to start the season, and in recent times have lost three of their last four.

While they will be desperate to get back into the winner's circle here, it won't be easy.

Playing at the AT&T Center against a fired up San Antonio is always a difficult task.

The Spurs are on a run of three straight home victories. They made light work of the Lakers, Jazz and Suns, all in the past week.

New recruit DeMar DeRozan has really impressed his new fans with a string of impressive performances.

Interestingly for a guard in the modern era, DeRozan is not a noted three-point shooter.

He has only scored 18 points from beyond the arc all season, at a shooting percentage of just 17%.

But it's when DeRozan gets inside the arc that he becomes so deadly. He averages above 50% from his two-point attempts, and is incredibly accurate when he gets to the charity stripe.

He had a particularly good game against the Jazz with 26 points, 8 assists and 6 rebounds.

A similar performance would go a long way towards securing another San Antonio victory at home.

For the Clippers, it will come down to how the likes of Tobias Harris and Danilo Gallinari handle the partisan crowd in Texas.

They will also have to cope without veteran guard and one of their stars this season Lou Williams, who will be sidelined with injury.

Reasoning: Losing Lou Williams is a huge blow for the Clippers, who look to be on the slide.

They will do well to keep this one close against an in-form San Antonio outfit.

A team in the middle of a rebuilding phase, the Chicago Bulls will look for a strong win here to lift themselves off the bottom of the Eastern Conference ladder.

They take on the Magic not in Florida, but in south of the border in Mexico, a nation where the team from Chicago enjoy widespread popularity.

Therefore, even though this is technically an Orlando home game, the crowd will be right behind the Bulls to give them a much needed boost.

While the Bulls haven't had the best start to their 2018/19 campaign, they have been without star players Lauri Markkanen and Kris Dunn for the most part.

The seven-foot Finn Markkanen recently returned from injury and has a few games under his belt.

His height will be important up against a team with plenty of talented big men.

Kris Dunn meanwhile will be playing his second game back after a long injury lay off.

While the classy guard will likely play limited minutes, his influence off the bench has the potential of being decisive here.

Even though Chicago have lost their previous two away games by big margins, they showed against the Thunder on December 8 what they are capable of on the road.

The young Bulls just held on for a two-point victory over the likes of Paul George and Russell Westbrook in OKC.

If that performance is repeated here in front of a Mexican crowd who will be cheering them on, the Bulls will be winning comfortably.

Where the Magic do have an advantage is inside the paint.

The team from Orlando are spoilt for choice when it comes to high-quality big men.

Their top four scorers this season all measure above the 200cm mark.

Probably the pick of the lot is Aaron Gordon, who as well as his work inside the paint, doesn't shy away from shooting from beyond the arc.

With 43 three-pointers this season, as well as a 2-point shooting percentage above 50%, Gordon will hold the key to Orlando's chances here.

Reasoning: This is the best piece of value all week, with the bookies not cottoning on to the fact that this will feel like a Chicago home game.