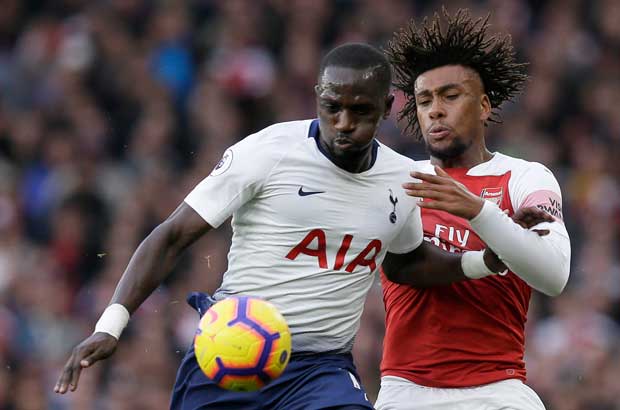 Tempers will fray and blood will boil in a weekend of EPL action that sees three derbies take place.

Spurs and Arsenal kick things off in the always spiteful clash, where rival supporters would do almost anything just to see the other lose.

Then Fulham will need to produce a mammoth performance to stave off West London rivals Chelsea, and keep their survival chances alive.

And finally, Liverpool will look to hold on to their lead at the top of the table when they face a determined Everton.

The round kicks-off with a rivalry that only seems to get more intense the longer it goes.

Wembley will host the 198th North London derby, much to the frustration of Spurs fans who were anticipating this to be the first game in their shiny, new stadium.

But with a much larger capacity, playing at Wembley certainly won't be a disadvantage for Tottenham, who will have a very partisan crowd behind them.

The Lilywhites will need to draw on this energy to put in a strong performance and snap a two-game losing streak.

Their last match at Wembley saw them put in their best performance of the year to triumph 3-0 over Borussia Dortmund in the Champions League.

Since then, away games at Burnley and Chelsea have resulted in two defeats for Mauricio Pochettino's men.

Both displays were poor, and the defeat to their other rivals Chelsea will be a bitter pill to swallow for Spurs fans.

The interesting fact about this two-game losing streak is that it coincides with Harry Kane's return to the team.

Kane, arguably the world's best striker, hasn't necessarily been all that bad since his return from injury.

The problem is that Tottenham look to him too often in attack, instead of playing through the in-form Heung-min Son.

Having said that, Kane has an outrageous record in North London derbies, having scored 8 goals in his career. One more will make him the all-time top goal-scorer in this fixture, at just the age of 25.

One player who isn't expected to start for Spurs is right-back Kieran Trippier.

He scored a horror own-goal against Chelsea, and will be rotated for Serge Aurier, who Spurs fans believe to be a superior defender than Trippier.

Arsenal come into this game full of confidence after putting Bournemouth to the sword midweek.

The Gunners had five different goal scorers in their 5-1 drubbing of the Cherries.

However, Arsenal have a woeful record away from home, which is easily the worst of the Big Six teams.

They have only won 5 of their 13 EPL away games this season. And all of these 5 victories came against opposition who currently sit in the bottom half of the ladder.

It is no surprise then that the Gunners start as underdogs with the bookies' EPL odds here.

Reasoning: Spurs have been the better team all season, and despite losing their last two, will appreciate getting back in front of their home supporters.

The North London derby is followed by the West London derby, when the Blues make the short bus trip to Craven Cottage to take on Fulham.

Chelsea put a horror week behind them when they accounted for Tottenham 2-0 in a comprehensive victory on Thursday morning.

It was Chelsea's defence that really impressed, not allowing Spurs to have a single shot on target.

As expected, Kepa Arrizabalaga was dropped by Sarri after his shenanigans, and replaced by Willy Caballero.

The Argentine didn't have a thing to do all night, thanks to the work of Antonio Rudiger and David Luiz in front of him.

The cliche goes that good teams are built on defence and not offence, and that's what the Blues have shown of late.

They have now played three games in a row, in three different competitions, and kept three clean sheets.

Considering two of these teams were against Tottenham and Man City, Chelsea's defence is looking in very good shape.

Fulham will need to produce something special then if they want to find the back of the net here.

After their midweek loss to Southampton, the Cottagers are almost unbackable favourites to be relegated.

They are languishing 11 points from safety, and with only ten EPL games remaining, only something close to perfection will save their skins.

Fulham aren't without a hope though.

Since Ranieri took over, Fulham have been much better at home.

But that form won't stack up here.

Reasoning: This EPL bet is looking like good value based on how Sarri's men have been defending of late.

The short answer is no.

The Toffees' last victory over the Reds came in 2010.

Eighteen matches later, and the blue side of Liverpool are still waiting for another chance to celebrate.

Everton's midweek 3-0 away win at Cardiff will give them some confidence of pulling off an upset and destabilizing Liverpool's title push.

Gylfi Sigurdsson scored a brace, making him Everton's top scorer for the campaign with 11 goals.

Along with young Brazilian talent Richarlison, who has 10 for the season, Sigurdsson will be the danger man for the home team.

But while they will come into this clash with some confidence, that was severely diminished after Liverpool thumped Watford 5-0 on Thursday morning.

This was just the win Reds fans needed to calm their nerves after the anxiety was building and building, many thinking that they were on the verge of letting another EPL title slip through their grasp.

Liverpool's full-backs were immense, combing for all five assists between them.

Sadio Mane scored a brace, stepping up to the plate after Roberto Firmino didn't start because of injury.

His speed and power will play a big role again.

Another reason why Everton will struggle to find a win is that breaking down Liverpool's defence is no walk in the park.

Alisson has kept four consecutive clean sheets in goal for the Reds, who have gone more than 400 minutes without conceding a goal.

In the previous two Merseyside derbies, Liverpool have also not conceded a goal.

With Virgil van Dijk in career-best form, the Toffees will need to pull a rabbit out of the hat the find the back of the net here.

Van Dijk also scored twice for Liverpool in their recent win over Watford.

Once again, he'll be a threat in the air that the Toffees will struggle to handle.

Reasoning: Liverpool's defence and goalkeeping is just too good for an Everton team lacking a quality striker.