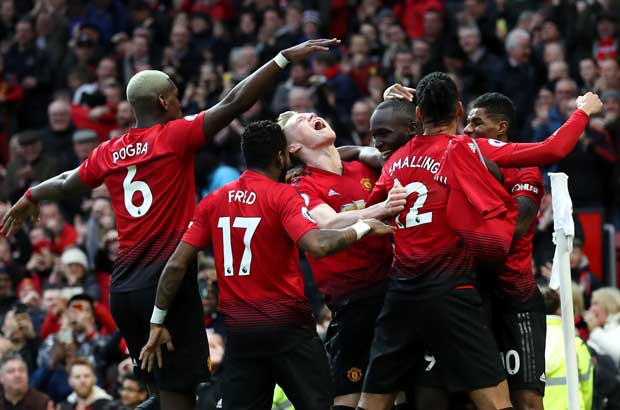 Gunners in the firing line of a united Manchester

With the EPL season now in the home straight, every point is vital and the stakes get ramped up even further.

This couldn't be more true for stuttering Liverpool, who won't find things easy against a spirited Burnley outfit.

It's 6th vs 7th when Chelsea host a Wolves side who are hungry for another upset.

But the highlight game from our EPL betting tips sees Solskjaer's Manchester Utd attempt to remain undefeated when they face an Arsenal team desperate to cling onto 4th place.

It seemed like only a matter of time before Liverpool slipped up and relinquished the lead to Manchester City in the EPL title race.

Now one point behind the Citizens, the Reds will need to put a disappointing Merseyside derby behind them and come out firing.

While their home form has been second to none in recent seasons, Burnley are the sort of opposition that will give Liverpool trouble.

Therefore, even though they are starting at EPL odds of just $1.12 to win the match, securing all three points will be much harder than the bookies seem to think.

Burnley's recent 2-1 victory to knock Tottenham out of the title race proved that an upset isn't beyond them.

Including that match on February 23, the Clarets were on an 8-game EPL undefeated streak.

Despite losing their last two since the win over Spurs, there's no doubt that Sean Dyche turned things around after Christmas, when Burnley were looking certainties to be relegated.

Whatever he said or did to inspire this revival, it worked. Burnley have returned to the successful pragmatic football that saw them finish 7th in the 2017/18 EPL season.

This style involves sitting very deep and compact in defence, and playing long balls up to strike duo Chris Wood and Ashley Barnes in attack.

These two are old-fashioned, rough and ready strikers who aren't afraid to get in a scrap.

This playing style might not be as effective against Liverpool however, due to the dominant form Reds' centre back Virgil van Dijk is in.

Standing at 193 centimetres, van Dijk is especially comfortable in the air, where he seems to win every header in his vicinity.

However, the problem for Liverpool of late hasn't been their defence, but their lack of goals.

Mo Salah has struggled to repeat his clinical form from 2018.

While the likes of Jordan Henderson and James Milner in midfield look like they lack the creativity and quality it takes to keep pace with Man City.

Against a stubborn Burnley defence, don't expect the Reds to score too many goals here.

Reasoning: Based on how both teams match up, a low-scoring game is on the cards.

Despite turning things around of late, Chelsea come up against a spirited Wolves side who always lift a gear when they play one of the "big six" teams.

Chelsea and Maurizio Sarri have steadied the ship with consecutive EPL wins against London rivals Tottenham and Fulham in the past two match weeks.

This came after a horror run of results that saw them lose 4-0 and 6-0 to Bournemouth and Man City respectively, as well as go down on penalties to the Citizens in the League Cup final.

New recruit Gonzalo Higuain found the back of the net against the Cottagers last week, while Eden Hazard put in another accomplished display.

Against most mid-table teams, the quality of these two alone would be enough to secure all three points.

But playing Wolves is a different story.

This season, Nuno's men have already defeated Chelsea in the EPL, recording a 2-1 victory back in December.

This was no flash in the pan, with Wolverhampton also handing Spurs an EPL defeat, and knocking Liverpool out of the FA Cup.

These results go alongside draws against Arsenal and both Manchester clubs in the league.

Wolves play three at the back, with two wing backs out wide that can either bomb on in attack, or sit back and form a back five in defence.

This system has served Wolves superbly all campaign, especially against big six clubs, as it allows them for a more defensive and counter-attacking approach.

With plenty of speed in their side, and not to mention the quality of Ruben Neves and Joao Moutinho in midfield, Wolves are a complete team.

If Chelsea think they can just turn up and cruise to a comfortable victory, they will be handed a morale crushing defeat.

And with less than ten match weeks remaining in the EPL season, this would go a long way to dashing their top 4 hopes.

Reasoning: Chelsea are the better team and have won two on the bounce. But Wolves go to another level when playing top teams, so anything could happen here.

This is a fixture that has huge ramifications for the top 4 race, and a 2019/20 Champions League spot.

The Red Devils will come in buzzing after what they managed to do in Paris on Thursday morning.

Trailing 2-0 after their first leg against PSG in their Champions League Round of 16 tie, Man U pulled off an unlikely 3-1 victory that saw them progress on the away goals rule.

This was in a game without star player Paul Pogba, who was ruled out with suspension.

Despite being dominated in the game, and receiving a fortunate penalty decision from the VAR in added time, Man U will still take plenty of confidence heading into this crunch game against the Gunners.

Ole Gunnar Solskjaer hasn't put a foot wrong since assuming managerial duties, having only lost one game in the almost three months since he took over.

That was against PSG in the first leg, with Man U undefeated in the EPL under Solskjaer.

The likes of Paul Pogba, Romelu Lukaku and Marcus Rashford have all found form after they struggled under Mourinho. This highlights just what a great job Solskaer has done.

It's only a matter of time before he is handed the permanent position.

However, this game will not be easy, especially as it is played at the Emirates, where Arsenal have a terrific record.

The Gunners have won 12 of their 15 home games this campaign, and have only tasted home defeat once in the EPL.

Unsurprisingly, that came against Manchester City, all the way back in match week 1.

However, perhaps a better form reference would be the FA Cup tie at the Emirates on January 26.

The Red Devils were clinical that day, defeating Arsenal 3-1, despite having less possession and shots at goal.

This manner of victory is a testament to Man U under Solskjaer.

They aren't necessarily playing the best football. But through positivity and the will to win, they are currently the most dangerous side to come up against, arguably in world football.

Reasoning: With Pogba returning to a side full of confidence, Man U look the goods once again.