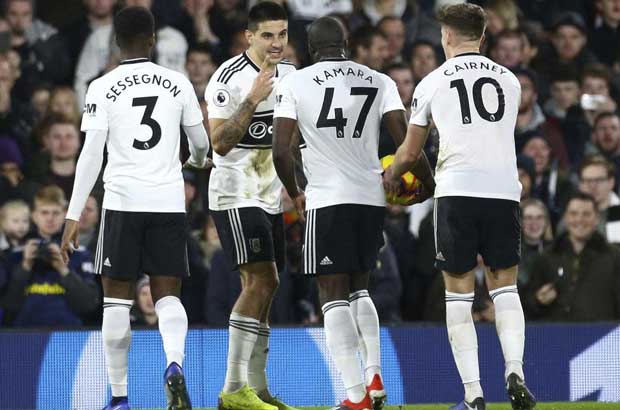 There's a reduced schedule of EPL games this weekend due to the FA Cup quarter finals taking place simultaneously.

Nevertheless, there's still a handful of quality games for EPL punters to get their teeth stuck into.

Liverpool's trip to Fulham is the highlight, in a game that has massive implications at both ends of the table.

Read our EPL betting tips for this fixture, as well as the Bournemouth vs Newcastle and Everton vs Chelsea matches.

It's 12th versus 13th when the Cherries host the Magpies, with both outfits looking to break into the top 10 before season's end.

While nothing is certain in the EPL, both of these sides have shown enough this campaign to suggest that they won't be dropping down to the Championship.

Regardless, all matches between teams in the bottom half of the table are crucial at this time of year, given the ever-present threat of relegation.

Newcastle sit just 6 points clear of the drop zone. A defeat here is sure to pile on unneeded stress for their loyal supporters.

The ones who make the long trip down from Tyneside will demand a good performance here.

Based on how they've been playing lately, don't be surprised if the Magpies get the win.

They have won 3 of their last 4, including a dramatic come-from-behind win against Everton last time out.

The kicker though is that these three winning matches all came at home, with Newcastle faring nowhere near as well on the road.

That's good news for the Cherries, whose home and away performances are like comparing chalk and cheese.

At home, on their small ground on the South Coast, with a vocal home crowd urging them on, Bournemouth play like a top 6 team.

In fact, Bournemouth have the 7th best home record in the EPL this season, securing 28 points.

Only Man City, Liverpool, Arsenal, Chelsea, Man U and Spurs sit above them.

Another positive for the Cherries is the recent return of star striker Callum Wilson.

Last week, Wilson played his first game since early January, where he not only scored a goal, but provided the assist for the other in Bournemouth's 2-0 victory in Huddersfield.

Look to him to relish playing back at home, and inspire a comfortable Cherries win.

Reasoning: Their home record and Wilson's return would each be enough to recommend the Cherries here.

Sitting 13 points from safety with just 8 games to play, this is arguably Fulham's last chance to spark an improbable late-season revival.

While they won't officially be relegated if they taste defeat here, it's only a matter of time.

Therefore, this game against EPL heavyweights Liverpool looms as the last chance saloon for a side in desperate need of a spark.

Toppling the Reds would surely provide that boost, but it certainly won't be easy.

Compare that with the Reds, whose last game was a 3-1 away victory over German champions Bayern Munich in the Champions League.

It's no surprise then that Liverpool are starting at the EPL odds of $1.22, even though they are the away team.

Having said that, the Cottagers are sure to give everything to not just snap their losing streak, but throw a spanner in the works of Liverpool's title aspirations.

They have more than enough quality in their squad to get the job done.

Fulham have invested heavily this season, bringing in the likes of Andre Schurrle, Jean Michael Seri and Aleksandar Mitrovic amongst others.

The problem has been that this team has never gelled, with two managers seemingly unsure how best to use the talent at their disposal.

They were both sacked, with a third, Scott Parker now left to try and work a miracle.

While they've got the players for an upset, there's no way you could tip Fulham on form.

And even though they will be fatigued after having to play in Germany midweek, the Reds have too much quality up front not to score a bag of goals.

Reasoning: There's plenty of attacking talent in both teams, so expect a high-scoring game and the Reds to prevail.

Marco Silva will be seething after he saw his Toffees side surrender a 2-0 lead and get done 3-2 to Newcastle last week.

That result encapsulates Everton's whole season, where they have played well in patches, only to let everything fall to pieces.

They currently sit 11th on the EPL table, which for a team of the Toffees' stature, is nowhere near good enough.

And the worrying sign for Everton going forward, is that their usually good home form has all but vanished.

In recent seasons, the trip to Goodison Park has always been a tricky one for away teams.

But this campaign, Everton have the 12th best home record. Compare that with their away record, that is the 11th best in the league.

Against a Chelsea side with a top 4 spot in their sights, what they've dished up thus far won't be good enough.

Everton will need to produce their best performance of the season to cause an upset here, and that doesn't look like happening.

The Blues meanwhile can consider themselves lucky to escape with a point from their previous EPL game against Wolves.

Once again, Eden Hazard was their saviour, scoring a superb goal in injury time to salvage a draw.

Before that result, the Blues put successive EPL wins together, over London rivals Spurs and Fulham.

While there's nothing spectacular about that form, it suggests that Chelsea have at least steadied the ship that was sinking in early 2019.

Interestingly though, when Chelsea were in their imperious early season form, the Toffees were one of the few sides to contain them.

They are capable of repeating the dose here.

Reasoning: This is great value for a game between two stuttering sides.