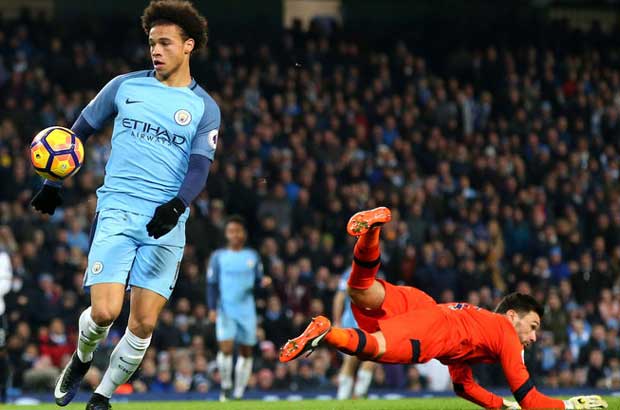 City too slick for jubilant Spurs?

If the EPL rematch between Tottenham and Man City is only half as good as their midweek encounter, then the opening game of the round promises to be a belter.

Both sides have plenty to play for, and Liverpool fans are sure to be watching keenly, hoping Spurs can pull off an unlikely upset.

Read our match preview and EPL betting tip for that clash, as well as two other highlight games in what is a hugely important EPL round.

EPL fans couldn't have asked for a better match to kick-start the weekend of football.

If we see anything like the Champions League quarter-final that these two clubs contested on Thursday morning, then this will easily be the EPL game of the season.

There's so much at stake and so many story lines heading in.

And that was before the UCL match, where Man City triumphed 4-3, but went down on aggregate after the away goals rule.

Raheem Sterling looked to have completed his hat-trick and won the tie at the death, only for the goal to be disallowed for offside after a VAR check.

As well as being a breathtaking spectacle, that match also provides a great form-guide for punters.

And that's why Spurs will start as such heavy outsiders in the EPL odds.

The Citizens dominated the match after Son Heung-min's early double, and really should've won the game by a margin.

However, the rub of the green went against the home side, who will be desperate to bounce back here.

They must quickly put aside their disappointment and refocus on the league, where any slip-up would cost them.

Spurs meanwhile will be elated, but also need to refocus in their quest to nail down a top-four spot.

The task will be much harder for the visitors after central midfielder Moussa Sissoko limped off in the UCL clash.

Sissoko has been one of Spurs' best this campaign, and will be sorely missed by his teammates here.

This news is compounded with fellow CM's Harry Winks and Eric Dier also sidelined with injury.

You could see in the second half of the UCL tie, with Sissoko off the field, just how easily Tottenham's midfield were exposed by the likes of Kevin De Bruyne and David Silva.

Wanyama has only made a recent return from injury himself, and you can bet he will be feeling it if he lines up for this clash.

Against a City squad that is spoilt with riches, Tottenham just don't have the depth to back up.

Reasoning : EPL form and the recent UCL game both point to a heavy City win.

This is a crunch game for Chris Hughton and Brighton, who have recently endangered their chances of staying up with four straight losses.

The Seagulls were flying high, well clear of relegation.

But this recent slide has them sitting just 2 points clear of the drop zone, albeit with a game in hand.

Midweek they suffered a crushing defeat to Cardiff, the team just below them in the fight for survival.

Brighton were poor, and never really looked like scoring until Glenn Murray hit post with a header in stoppage time.

Even if he put that away, the home side still wouldn't have got anything from the game.

They desperately need to bounce back here, especially as they have a horror run home that sees them face Spurs, Arsenal and Man City.

Socceroos goalie Mat Ryan will be hoping to inspire a result from the back.

His shot-stopping might be the only way the Seagulls stay up, because their attack has gone missing.

In their four-game losing stretch, the South Coast side have failed to score a single goal.

Indeed, if you include the FA cup, the Seagulls have now gone 480 minutes without finding the back of the net.

Against a solid Wolves defence, this number will only increase.

Wolverhampton have been superb this season, and look the favourites to finish as "the best of the rest".

A win against a struggling Brighton side would go a long way towards securing a 7th-place-finish, which would be a phenomenal effort from a newly-promoted side.

They have bags of quality all over the park, and if the game was decided by the players on paper, then Wolves would breeze to victory.

However, don't totally discount the visitors.

Especially considering that Wolves are coming off a 3-1 loss to Southampton.

Even so, anything other than a Wolves win would surprise.

Reasoning: It's hard to see the Seagulls scoring, while some Maty Ryan magic could keep Wolves to a low total too.

The race for the remaining two Top 4 spots takes centre stage here, when Man U travel to Liverpool to take on Everton.

After where they were at Christmas, it's a miracle that the Red Devils are even within touching distance of the Champions League spots.

Ole Gunnar Solskjaer has completely transformed the side, and for a while they were looking unstoppable.

But a recent slump came to a head midweek, when they were soundly beaten 3-0 by Barcelona in the UCL.

However, beating Man U at Camp Nou is arguably the toughest ask in world football.

United fans shouldn't be losing confidence in Solskjaer and their team, who have all the weapons to bounce back with a strong win.

Romelu Lukaku started on the bench in that Champions League tie and you can bet that he'll be in the starting line-up here, against his former side.

At his best, Lukaku is an unstoppable striker with both the power and speed to worry any defence.

After languishing under Mourinho, Lukaku has returned to somewhere near his best under Solskjaer.

Everton will be all too aware of his danger, and their centre backs will have their hands full trying to stop him.

Speaking of the Toffees, they have finally started to put things together now that the sun is setting on the season.

They won 3 straight games against quality opposition, in a stretch that didn't see them concede a single goal.

That was until their most recent performance, where the already-relegated Fulham humbled Everton by two goals to nil.

However, this performance wasn't as bad as it looks on paper.

If it wasn't for some Ryan Babel magic, then the Toffees had the possession and shots at goal that probably should've translated into a win.

They'll be ready for the danger the Red Devils pose, and will be tough to beat at Goodison Park.

Reasoning: With extra days to prepare, and good recent form, the Toffees will keep this very competitive against a strong Man U side.